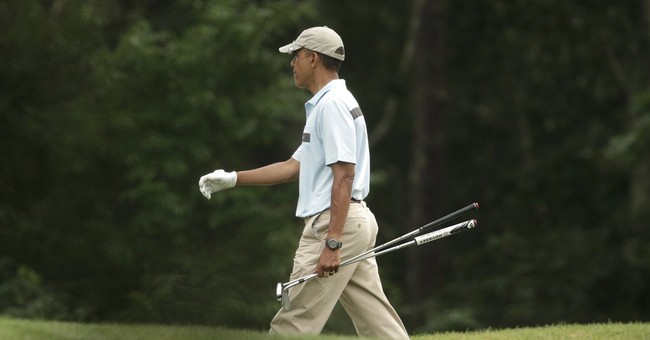 U.S. President is headed to Europe this week. There used to be a time prior to his election when he would travel to Europe and inspire the masses -- mostly on the strength of their own idealistic projections. But now, never has a Nobel Peace Prize laureate seen so many global conflicts erupt on his watch, while mostly standing there slack-jawed like a spectator at a fireworks display.

Stopping first in Estonia, then in Wales for the NATO leaders' summit, Obama has already nicely sidestepped any real-life problems that need addressing. "Part of the reason I'll be going to Estonia is to let the Estonians know that we mean what we say with respect to our treaty obligations," he said. That's nice -- but of all the places in the world where there's actual conflict going on right now, Estonia isn't actually one of them.

How about dealing with the current problems in the world before tackling imaginary ones? Perhaps Obama could use some friendly suggestions for how to make the best use of his time during this trip.

Estonia, Obama's first stop, is home to NATO's Cyber Defense Center of Excellence. Last year, the Center published the Tallinn Manual, which painstakingly attempted to apply the traditional laws of warfare to hacking. Nation-states are still struggling with the non-state guerrilla warfare tactics used by jihad terrorists waging ideological warfare uncontained by geographical boundaries. Such difficulties were most recently highlighted when British Prime Minister David Cameron evoked the idea of delaying re-entry or seizing the British passport of any citizens caught returning from fighting, thereby forcing them to disembark from the Jihadi Global Tour. The suggestion promptly provoked opposition along the lines of, "What if other countries then bar their own jihadists from re-entry and we all just get stuck with each other's jihadists?"
CARTOONS | Tom Stiglich
View Cartoon

Take all the problems that nations currently have in developing effective counterterrorism measures -- well, the few measures that aren't automatically ruled out because they cause civil rights types to go apoplectic. Now add a further element of difficulty -- abstraction -- and you have the challenge of counter-cyberwarfare.

If Obama is visiting the epicenter of cyber defense, then he should leverage the opportunity to talk about the issue. Or are we to assume that the relentless and non-stop tit-for-tat of cyberattacks and return volleys between nation-state actors now rank so low on the priority list that Obama can afford to daydream about conventional warfare during his visit there instead?

Just last week, we were all told that the FBI was looking into a cyberattack on JPMorgan Chase banking data that is believed to be of foreign origin -- specifically Russian, according to a Bloomberg report. Is this a significant legitimate and existential public concern? Or the announcement of a breach that lasted about three months despite regular systemic security checks just convenient to expose now that it's time for another round of anti-Russian sanctions?

Is the hack the breach itself? Or is the disclosure of the breach and the subsequent incitement of public fear one big massive hack of public perception of cybersecurity and any associated fears?

The public deserves to know how much of the hacking fear mongering coming out either directly from, or associated with, the U.S. government is really worth being concerned about. Tallinn would be the ideal place to highlight these questions and offer some legitimate insight and answers from international experts.

Which brings us to yet another way Obama could leverage his European visit: How about using the pretext of Russian bogeymen hackers to open up a diplomatic channel with Russian President Vladimir Putin? Somehow I think that a request to discuss hacking would work better as an overture than, "Can we talk about Ukraine?" No one seems to want to actually discuss Ukraine -- and by "discuss," I mean make any real diplomatic inroads.

Stop talking about invasions or sanctions for a few weeks. Find something else to do. It's not like NATO countries have no other problems to deal with. The entire Middle East is teeming with Islamic terrorists beheading people left and right. Try tackling that one, first. Russia will still be there to complain about afterwards -- but at this point, that should really be a fallback. Like when you're channel surfing and have been up and down the dial five times and you sigh and say to yourself, "Oh well, at least Seinfeld is on." Vladimir Putin should be NATO's Seinfeld. And right now there's a really ugly war movie to which Obama and his NATO colleagues should be exclusively riveted instead. It's not as sexy and the characters don't dress as nicely and aren't as Hollywood-friendly -- but without proper attention, it fast risks becoming a series.