Crooked Unions Try to Take Out Bravest City Councilman in the U.S. 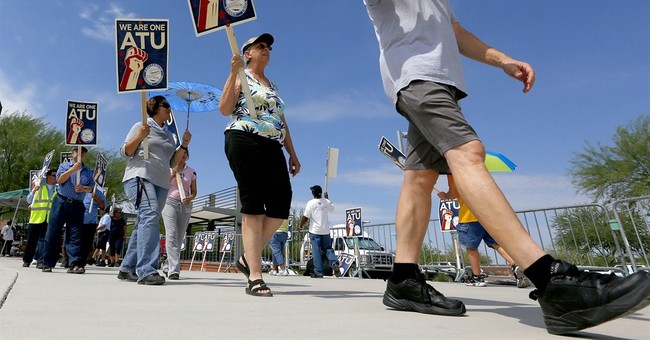 Phoenix City Councilman Sal DiCiccio, one of the most aggressively pro-freedom city councilmen, is under siege from the unions in one of the most corrupt local elections in the country. Along with a few other government officials around the country, which include Wisconsin’s Republican governor Scott Walker, he tried to reign in the out-of-control and unsustainable increasing costs of government employees, particularly their pensions. Up for reelection this year, DiCiccio is being challenged by union-backed Democrat insurance executive Karlene Keogh Parks. The unions unsuccessfully attempted to recall him in 2011.

DiCiccio wants to cut $79 million in government waste from the City of Phoenix. The unions are furious that he exposed their "food tax for pay raises scheme.” The unions want to extend an “emergency” food tax that was implemented temporarily to keep government going. It was not intended to provide extras like raises and bonuses. Many cities don’t even have a food tax. DiCiccio discovered that since the food tax was implemented, the City of Phoenix has brought in $145 million extra, coincidentally almost the same amount the city has paid out in pay raises and bonuses during that same period. City of Phoenix staff admit that if they hadn’t spent the money on pay raises and bonuses, they could have “hired over 350 new police officers, restored all after school programs, restored senior programs or reinstated library hours.” DiCiccio worked hard to persuade his fellow city council members to vote in May to phase out the tax, beginning in January 2014.

It angers the unions that DiCiccio wants to “drain their slush fund for pay raises and bonuses” – at a time when most Americans in the private sector are seeing stagnant-level paychecks and salary cuts. Public-safety pension benefits for City of Phoenix retirees are higher than the state average, because of pension spiking. The city lets retiring public safety officers cash in their unused sick leave, vacation time and even fringe benefits such as a uniform allowance, in order to increase their pensions. Consequently, the average pension for a retired Phoenix firefighter is $62,082 a year, and the average pension for a retired police officer is $58,016. The statewide average public-safety pension is only $49,480. The city’s public-safety retirement cost skyrocketed to around $129 million in 2014, compared to only $7.2 million in 2003. Some employees become millionaires in their first few years of retirement, and the typical retirement payout to a public safety employee now exceeds Arizona’s average wage. The Arizona Republic ran a full expose on the shocking statistics earlier this year. The Goldwater Institute filed a lawsuit against the City of Phoenix over pension spiking earlier this month.

DiCiccio’s opponents have filed frivolous lawsuits against him to tie up his time and sully his reputation. One lawsuit has already been thrown out, and the judge told the litigants they should be embarrassed. Opponents sent at least 14 mailers to voters, and purchased $232,000 worth of TV political campaign advertising time. Signs have been put up around the city that say “Lobbyists (or Developers) Support Sal DiCiccio.” This is terribly disingenuous. Opponent Keogh Parks wrote in a letter to the editor of the Ahwatukee Foothills News that was published on July 15th, "I have not accepted one single lobbyist donation to my campaign and never will..." Yet her campaign finance reports reveal that she has been taking contributions from lobbyists the entire time.

There are reports that City of Phoenix employees are engaging in illegal political campaign activity against DiCiccio, no doubt directed by the unions. Residents say that firemen, including a fire captain, knocked on their doors to campaign for his opponent. Phoenix city employees are prohibited by the city charter from engaging in campaign activity other than voting and privately expressing their political opinion. A spokesperson for the attorney general said that the activity “looks as of now to be a giant smear campaign hidden behind an organization. It’s one of the more egregious ones I’ve seen come across my desk,” said press secretary Stephanie Grisham.

The day after Parks got into the race, a mysterious organization calling itself “Campaign for Better Neighborhoods” was formed. The secret “black ops” group has ties to the Democrat Party and union leadership. It has been sending out mailers about the race, but has not filed as an independent-expenditure group or political committee. Political committees are required to disclose their donors, which it has not done. The fines for not doing so would be in the hundreds of thousands of dollars. There is no way the group can claim it is not a political committee, the mailers are so overtly political. One says, “Sal DiCiccio voted for the largest pay hike in City of Phoenix history.” It urges voters to call DiCiccio and “tell him to STOP using our tax dollars for extravagant pay raises and pension perks.” The truth is, all of the Democrats on the city council and most of the Republicans also voted for that particular pay raise, which was for the former city manager. The group claims that its advocacy is for a particular issue, not a candidate, so it is exempt. Yet since the issue it is obviously fake, it doesn’t pass muster.

His union-backed opponent is so unscrupulous that former Phoenix City Councilwoman Peggy Bilsten, a liberal who previously backed Janet Napolitano for governor, spoke up defending DiCiccio against the attacks. Even the liberal Arizona Republic endorsed DiCiccio, editorializing, “The city’s pension and compensation plans are unsustainable, and the unchecked influence of city unions threatens to further strain an already bloated bureaucratic budget.”

Sadly, the Phoenix Police union, which endorsed DiCiccio previously, has turned on him over this. DiCiccio says when he returned to public office in 2009, he started out as a "team player" but said he "realized the public was being told a phony story and wasn't being told the truth." DiCiccio told the Arizona Republic in 2012, "The last two years have been basically bloody. They have just been horrible...I mean, it’s hard walking in an elevator when you've got everyone thinking that you hate them, when in fact you don't. You just want them to clean up and do what the private sector does."

Early balloting has already begun. Because there are only two candidates in the race, the winner will be declared on primary day, August 27th, without a runoff election. It is clear the unions and their favored candidate will stop at nothing to defeat this principled conservative. DiCiccio has spent so much money fending off the attacks that he can no longer afford television ads the remaining days until the election. Realizing that DiCiccio could become Phoenix’s next mayor, reversing its trend of becoming a Democratic-controlled city, the unions intend to steal this election one way or another. Expect more illegal maneuvers at the last minute. This race likely has more corruption than any other 2013 race in the country, so what’s a little more?