America Has Taken More than Our Share of Refugees 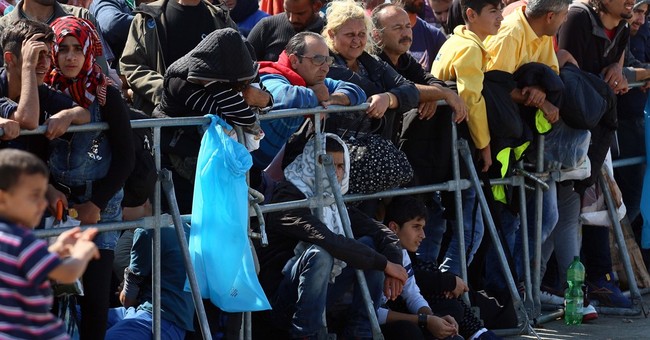 The United States is the most generous nation in the world, and we have taken many refugees from foreign lands. Europe has not offered to take refugees from Central America, so why are some politicians here insisting that we take many thousands of refugees from the Middle East?

While refugee crises are tragic, crimes committed by transplanted peoples against unwarned, unprotected victims in our own country are even more tragic. Politicians demanding that American neighborhoods accept thousands of refugees, without proper screening or any indication by the migrants that they genuinely want to assimilate into our culture, should be rejected.

Americans are horrified by images of tens of thousands of people, mostly unattached Muslim young men from the Middle East and Africa, crossing unguarded borders into Europe. The news media often describe these people sympathetically as refugees from the civil war in Syria, but many could be migrants seeking a more comfortable life in a rich society with a cradle-to-grave welfare state.

The scene is eerily reminiscent of the tens of thousands of people from Central America who crossed into the United States last summer. Often described sympathetically as unaccompanied minors fleeing gang violence, most of those Central American arrivals were able-bodied, tough young men who left their families in search of better economic opportunities.

Wealthy European nations did not offer to help out by accepting thousands of migrants from Central America. We did not expect that of them, and they should not expect it of us now.

The Muslim migrants follow a route through Turkey, Macedonia, and Serbia into Hungary, the European country closest to the Middle East, and from Hungary they can travel throughout 26 European nations. That route may soon close when Hungary completes the razor-wire fence it is building along its entire 108-mile border with Serbia.

The free movement of people across national boundaries, without passports, is required by the Schengen agreement, one of the central principles of the European Union. It makes those 26 member countries subject to the weakest link, the country with porous borders, in this case Hungary.

The idea of creating nations without borders, allowing the free movement of people inside a common perimeter, was pushed by President George W. Bush when he met with the Mexican president and the Canadian prime minister at Waco, Texas on March 23, 2005. Soon after that first summit of “the three amigos,” the Council on Foreign Relations published “Toward a North American Community” which called for a “seamless market” with “a more open border for the movement of goods and people."

Fortunately, Senate Judiciary Chairman Chuck Grassley (R-Iowa) wants to put some brakes on giving away the security of our neighborhoods to thousands of people having unknown intentions about the United States and our way of life. “Before agreeing to accept tens of thousands of Syrian refugees, the Obama administration must prove to the American people that it will take the necessary precautions to ensure that national security is a top priority, especially at a time when ruthless terrorist groups like ISIS are committed to finding ways to enter the United States and harm Americans.”

Our daily freedoms could be sharply limited if terrorists were to slip into our country along with migrants from areas hostile to the United States. Senator Jeff Sesions (R-AL) warns that "we're really not able to vet Middle Eastern applicants now, and if we increase that number, we'll be even less able to do so."

Stark financial problems also stand against welcoming so many strangers into our country. More than 90% of recent refugees from the Middle East are on welfare, according to official statistics published by the U.S. Office of Refugee Resettlement (ORR).

Our welfare system is already strained by the Central American migrants who entered our country illegally and never went home. There are a potential 6 billion people in the world who would like to partake in the American welfare system if given the opportunity, but we cannot afford to foot the bill for everyone in the world who does not have a job.