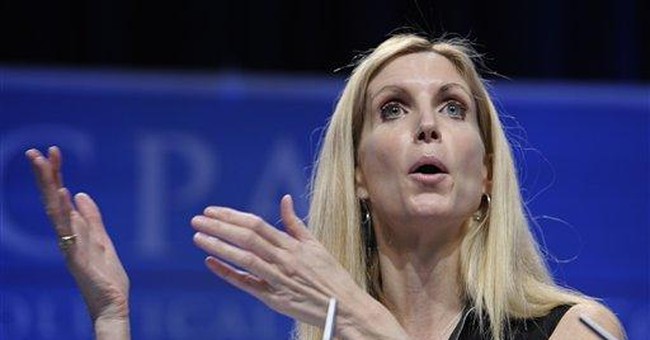 Trending
Ann Coulter lives up to her reputation of issuing warnings and political commentary that nobody else dares to say in her newest book, "Adios, America!" It's aptly titled; she makes the case that it is goodbye to the America we know and love if we don't stop diluting our population with people who don't love America, don't respect our Constitution and laws, don't even speak our language, and commit all sorts of unspeakable crimes.

"Adios, America!" brims with the scathing humor that has made Coulter's previous 10 books bestsellers.

"Adios, America!" spells out chapter and verse on the attitudes and customs of the foreigners Obama is welcoming by the millions into America, including their horrific mistreatment of very young women, some even younger than teens. Where are the feminists when we need them to shout about the "war on women"?

There are many devious ways that foreigners can get into the U.S. and then cash in on our generous welfare system. One route is the family unification policy, which qualifies for entry all varieties of alleged relatives, plus fake marriages by foreigners to U.S. citizens.

The racket called asylum allows a foreigner to claim without proof that he faces persecution in his home country, and then he can qualify for admission to the U.S. plus generous financial support by the U.S. taxpayers. The Tsarnaev family, whose sons bombed the Boston Marathon, were admitted after phony claims of persecution and then cashed in for $100,000 in U.S. handouts.

Coulter exposes the giant deception covered by the trendy liberal goal of "diversity," which excused dumping 100,000 Somalis on Minnesota. We've allowed 30 million Mexicans to settle inside our country; that's one-quarter of Mexico's entire population of 120 million.

In 2011, the Government Accountability Office reported that the minimum estimate of criminal aliens in U.S. prisons and jails was 351,000, a figure that includes only a portion of the criminal aliens incarcerated in state and local facilities.

Coulter asks a relevant question: "Why can't we adopt Israel's policy on immigration?" What do you think Prime Minister Benjamin Netanyahu would do if thousands of Israelis were being murdered by uninvited foreigners coming illegally into Israel?

If you guessed, "Give them in-state college tuition, driver's licenses, and free medical care," you would be laughed at. But that's what President Obama gives to our illegal aliens.

Coulter's book quotes scores of news reports describing the horrendous crimes committed by aliens against U.S. citizens, but somehow the news reports consistently fail to mention that the criminal was an alien. Here's a typical headline: "Man wanted for Raping Girl, 11, Robbing Her Family." The news story never used the word "immigrant," but described the criminal only as a "man" or "a 26-year-old man."

To illustrate the false slogan that "diversity is our strength," Coulter tells what happened to A.G. Currie Middle School in Tustin, Calif., which flew 65 foreign flags to make it a "model multicultural school" because, as its principal said in 1992, "we are looking to build on our diversity as a strength." By 2009, the school had become 91 percent Hispanic. Coulter's comment: "Nine percent more Mexicans, and it will have achieved perfect diversity."

When we're told we can't fence our southern border because "fences don't work" -- because people can always go over, under or around them -- Coulter responds: That's like saying "wheels don't work" because you might have a flat tire. And, remember, the Great Wall of China is still doing its job after centuries.

Americans want our borders closed to this flow of anti-American foreigners and criminals. Thank you, Ann Coulter, for alerting Americans to how Obama and the Democrats are destroying the land we love.