The War Against Christians and Even Christmas 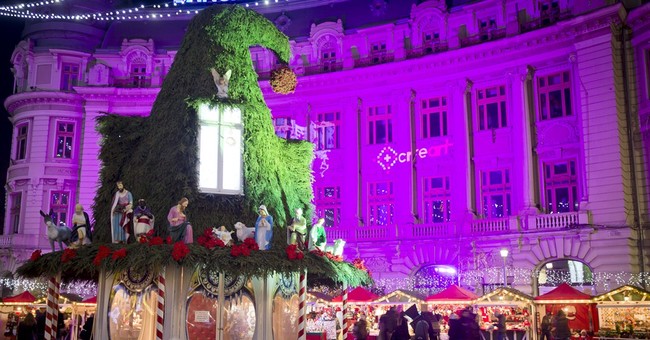 There are 250 million Christians in America today, but most seem to be oblivious of the fact that they and their religion are under steady attack from those who apparently hate Christianity, or at least want to expunge Christianity from any public place or mention. That hatred seems to extend to all sorts of evidences of Christianity in our society, such as Christmas, which is a federal holiday.

The Butler Elementary School in Belmont, Massachusetts, for years has had a tradition of allowing kids to take a December field trip to see a performance of the Nutcracker ballet. The anti-Christian zealots in its Parent Teachers Association developed a secret plan to cancel this outing because the ballet features a Christmas tree on the stage, which they called "questionable content."

When news of the secret plan leaked out, parents forced the issue to be confronted at a PTA meeting, but parents were accused of being discriminatory if they supported the trip to see the Nutcracker ballet. The good news is that common sense prevailed and parents won the Nutcracker battle, but many believe it will come up again next year and in other schools, too.

No town or school is too small to escape the wrath of those who hate Christmas. The atheists went after the annual Christmas parade in Piedmont, Alabama, a small town in the foothills of the Appalachian Mountains.

The Piedmont parade isn't as spectacular as those in big cities, but it does feature the local high school marching band, Santa Claus on a bright red fire truck, local girls who had won beauty pageants and the Piedmont High School track team, which had just won the state championship.

When the parade committee selected "Keep Christ in Christmas" as the theme of this year's parade, nobody thought that was controversial. But suddenly the little Alabama town was confronted by a noisy group of atheists from Wisconsin called the Freedom From Religion Foundation.

This bunch of atheists sent the mayor a threatening letter alleging that one person in Piedmont had complained about the theme of the parade, saying that it "alienates non-Christians and others in Piedmont who do not have a 'strong belief' in prayers." Unfortunately, the city's attorney ruled that the theme violates the law because "the sentiment of 'Keeping Christ in Christmas' does not qualify as a secular celebration."

The folks in Piedmont were not intimidated. The mayor said, "We still have the same religious floats. We're still going to have this wonderful Christian parade regardless of whether we have a theme or not." Local citizens paid their entry fees to be in the parade and marched alongside of the parade with signs reading "Let's Keep Christ in Christmas."

The mayor had some advice for the one person in town who had complained: "If they don't like a Christian parade, just stay at home and don't watch."

There is nothing really new about atheist groups trying to get supremacist judges to rule against any prayer in public and against any proclamation of Christian values. Their recent attempt in Colorado was met with a resounding "no."

The Colorado Supreme Court dismissed a legal challenge to Gov. John Hickenlooper's Day of Prayer proclamation, which is an annual Colorado tradition announced to coincide with the National Day of Prayer. The legal challenge had been filed by those ubiquitous busybodies from Wisconsin, the Freedom From Religion Foundation.

Writing on behalf of the 5-2 majority, Colorado Chief Justice Nancy Rice ruled that the lawsuit failed to show any "injury sufficient to establish individual standing." In other words, no harm was done by the annual honorary proclamation.

Of course, the FFRF is continuing its drive to establish a new "right not to be offended." These atheists are determined to silence our freedom of speech in the process.

Another important victory for religion occurred last fall in Oklahoma. State Representative Mike Ritze spent $10,000 of his own money to pay for the construction of a Ten Commandments monument that was placed on the grounds of the State Capitol with the approval of the State Legislature, but no public money was ever spent on it. It was part of a 100-acre complex that has more than 50 other monuments.

The ACLU then sued, claiming that the monument on Capitol grounds violates the state constitution's ban against using public property to support a religion. The ACLU made a curious argument, claiming that its plaintiffs were not offended by the Ten Commandments, but were offended that the government was using something sacred for political purposes, and the monument's presence at the State Capitol cheapened a sacred text.

The suggestion that the ACLU is worried about Scripture being cheapened is laughable. An Oklahoma judge ruled that the monument can stay. The state Attorney General Scott Pruitt pointed out that the Ten Commandments are of huge historic value, citing the "historical role the text has played in the founding of our nation."