Sessions Gets Right With the Truth 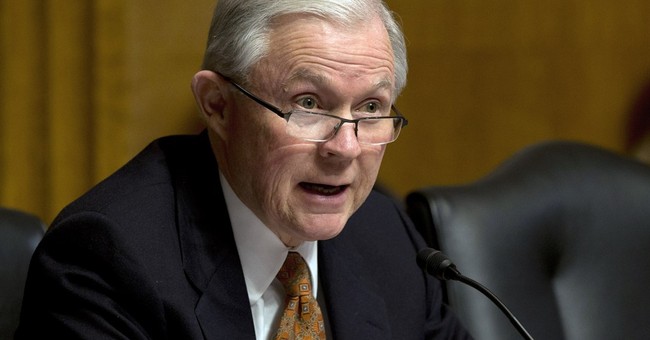 Trending
"Get right with the law" is the trendy new poll-tested slogan that's supposed to make both amnesty-resistant Americans and illegal aliens accept whatever so-called immigration reform Congress considers. Alas, playing with words will not sell amnesty to Americans or non-amnesty to illegals.

House Republicans went into a "retreat" in a Maryland hideaway to consider a statement of "principles" put before them by the House leadership. Sen. Jeff Sessions, R-Ala., immediately said they are "the same recycled talking points, crafted with the help of the same consultants and special interests," and that the proposed legislation "ensures only the amnesty and not the enforcement."

Continuing, Sessions said the Republican so-called principles "would surge the already unprecedented level of legal lesser-skilled immigration to the U.S. that is reducing wages and increasing unemployment." While the Republican goal should be "to transition millions of struggling Americans from welfare and joblessness to work and rising wages," President Barack Obama's plan is to force "legislation that drastically surges the future flow of new immigrant workers competing against unemployed Americans."

Sessions conveniently summarized the facts about where we are and where we should be going in a 30-page statement. He refutes 10 widely circulated myths that are currently used to deceive the public on this issue.

Myth: The immigration reform debate in Congress will be full and open. Are you kidding? From the Senate Gang of Eight's bill to proposals that emerged from the House Republican "retreat" in Maryland, all immigration plans have been assembled in secrecy.

Myth: The majority of Americans support immigration reform. All polls refute that statement. Pew Research Center and CBS report that 62 percent of Americans want the border secured (period!) before any immigration "reform" is even considered.

Myth: Those granted legalization must be able to support themselves and will not get welfare. What a lie! That has been the law for generations, but the Obama administration pays no attention to it. For example, the Boston bomber family actually was given $100,000 in welfare benefits.

Myth: Immigration reform will help the economy. In fact, amnesty will mean a larger number of people unemployed and on welfare.

Myth: Border security will come first and no legalization can happen unless triggers have been implemented. Almost nobody believes that myth. Scott Rasmussen reported that only 5 percent believe the government would ever close the border after immigration "reform" is passed.

Myth: Passing "immigration reform" and fixing the border will end illegal immigration. Hardly anybody believes that will or can happen so long as Obama fails to close the border and use E-Verify, refuses to use the biometric exit system to track visa entrants who don't depart when their legal time expires, and prevents our immigration agents from arresting and removing those who enter illegally or overstay their visas.

Myth: Congress will force Obama to fully enforce the immigration reform bill if it passes it. That's a sick joke coming after Obama's braggadocio that he will use his pen to scratch out any provisions he dislikes in any law.

Commissioner Peter Kirsanow of the United States Commission on Civil Rights said, "The immigration bill is a disaster for the unemployed." As Sessions points out, all plans will "hollow out our shrinking middle class" and "rank-and-file House Republicans are the last line of defense for working Americans."