What Establishment Candidates Must Accomplish in the GOP Debate 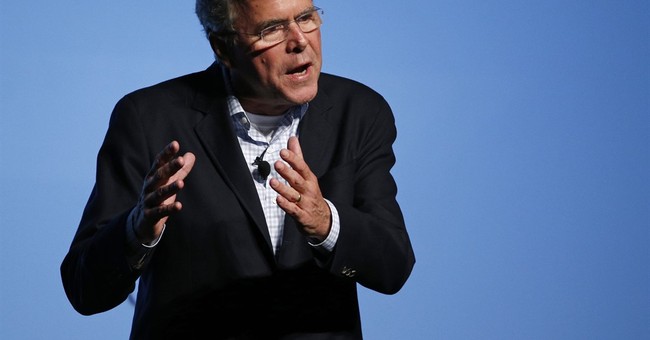 As the leading GOP candidates square off in their first debate, one thing has become clear: Americans are dissatisfied. The ascent of Donald Trump and Bernie Sanders testifies to serious doubts about establishment politicians.

Hillary Clinton’s video announcing her candidacy hit the buttons—jobs, fairness, education, and gender—necessary to hold together the majority that twice delivered President Obama the White House. But a CNN poll indicates the majority of Americans want the next president to change most of President Obama’s policies.

Still voters don’t want a return to the days of President Bush and express their frustration with those of both presidents by indicating preferences for Trump and Sanders despite their extreme views.

They advocate very opposite visions—less vs. more government in markets and social institutions—but address frustrations emerging from common roots—an economy that not delivering enough growth and big institutions that bully ordinary people.

To step forward from the pack and dispatch Trump, Jeb Bush, Scott Walker or some other GOP hopeful must express an understanding of these forces and position himself as the champion of ordinary folks.

Globalization is cleaning the clock of most Americans by driving down wages and pushing too many workers into the contingent economy—erratic hours, poor benefits and zero job security.

Free trade in America means giving imports unimpeded access to our markets, while foreign governments target U.S. industries and jobs with cheap currencies, subsidies and discriminatory regulations. The GOP candidate should simply promise to level the playing field by doing whatever it takes to eradicate the $500 billion trade deficit—and restore 4 million jobs in the bargain.

Americans can’t compete without affordable colleges and universities but pouring money in them through student loans has only left a generation too heavily in debt. The GOP candidate should promise to cut off federal loans and other aid to institutions that do not agree to cut costs and tuition by 20 percent and then limit future increases to no more than inflation.

No matter what Americans earn, they increasingly are up against forces that don’t make sense. Each year computer and communications technologies become less costly but home cable bills keep rocketing, banks pay hardly any interest on deposits but still charge 20 percent and more on credit card debt, and fuel prices are down but air fares stay high and planes are crowded.

Simply, big businesses have absorbed smaller competitors in the airline and health insurance companies, merged and snuffed out competition, and CEOs feast like aristocrats before the French Revolution. The GOP candidate should promise to bust up those monopolies, lower prices and get Americans a fair shake in the marketplace.

Health care in the United States is 50 percent more costly than in Germany, which also has a system of mandatory private insurance, because prices are much lower there. The GOP candidate should require drug companies to charge no more in America than they do in Europe and for U.S. doctors, hospitals and insurance companies to benchmark costs against German practices.

Hillary’s trump card is gender—many women want a woman for president. The GOP candidate has to convince women he (or she) feels their pain and is committed to taking on their issues—by explicit example.

Simply, half of his cabinet and political appointees must be female—corporate America would be compelled to follow suit. If the GOP candidate does not commit to that, then President Hillary Clinton will surely enforce the same.

It’s all very radical but conservatives should be about radical ideas that empower the individuals—be they white or not, male or female, gay or straight. And recognize banks and corporations are legal contraptions invented to serve a public good not further enrich the wealthy.