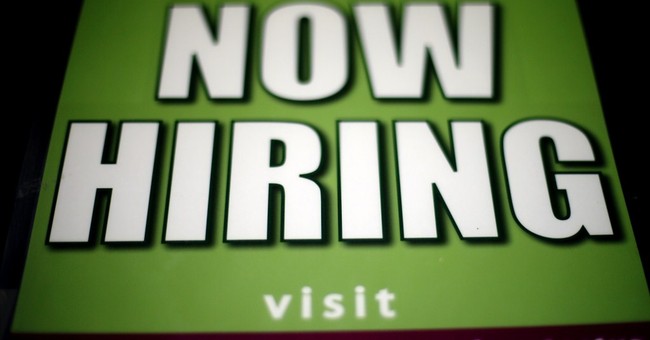 The economy added 214,000 jobs in October. The pace has picked up over the last year, but it is still far short of the 400,000 per month needed to bring unemployment down to acceptable levels.

The official jobless rate is 5.8 percent, down from its recession peak of 10 percent, but that has been mostly accomplished by encouraging prime working-aged adults to sit out the labor market—neither work nor look for work. If the same percentage of adults were in the labor force today as when Presidents Obama or George W. Bush took office, the jobless rate would be about 9.8 and 11.9 percent, respectively.

The Obama Administration alibis that Baby Boomer retirements are driving down adult participation in the labor market. However, 1 in 6 men between ages 25 and 64—too old for college and too young to retire—are jobless. Many are simply sitting at home watching ESPN and often relying on friends and relatives for support.

Three problems have limited jobs creation during the Bush and Obama years—a slowdown in economic growth, the absence of effective border controls and the work disincentives imposed by expanded social programs intended to redress income inequality.

In this century, GDP growth has averaged 1.8 per year, whereas during the Reagan – Clinton period it was 3.4 percent. The reluctance of both Bush and Obama to confront Chinese protectionism and open up offshore oil for development have created a huge trade deficit, which sends consumer demand and about 5 million jobs abroad.

Efforts to sustain jobs in the United States are frustrated by federal and state minimum wage laws and labor market regulations that limit employer flexibility, encourage the substitution of machines for workers and the employment created by public infrastructure spending.

Often government regulation of business is more burdensome than necessary to accomplish their legitimate objectives. For example, Dodd-Frank has encouraged the consolidation of banks, and that has resulted in more compliance officers in banks and fewer loans to medium-sized and small businesses.

Paradoxically in an economy with more than 9 million unemployed and actively looking for work, too many lack skills appropriate to the 21st Century workplace, and lack adequate incentives, resources and access to training to acquire useful skills.

The combination of free and subsidized health care, the earned income tax credit, and other government programs whose benefits phase out as incomes rise, imposes high effective marginal tax rates on lower income working families. These often encourage prime working age adults to forgo full time employment or not work at all.

Immigrants are all too eager to fill the void and have captured all of the nearly 9 million jobs created since 2000. Illegal immigrants hold many of these positions, and now the president threatens to legalize their status by executive action if the Republican Congress won’t cave to his demands.

Peter Morici is an economist and business professor at the University of Maryland, national columnist.. He tweets @pmorici1