The Left's Evolving Hierarchy of Rights 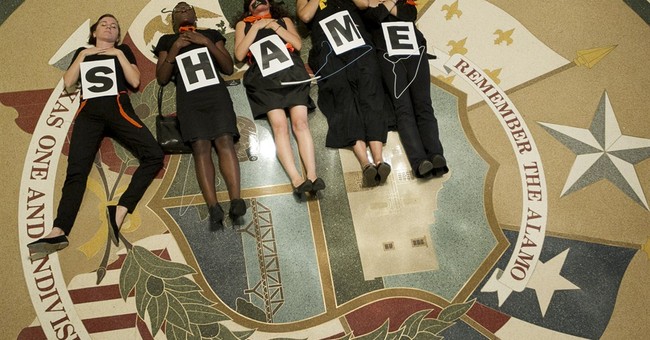 This article first appeared at TheBlaze.com.

Unless you’ve been sleeping under a rock, you’ve noticed the growing clash between religious freedom and issues like same-sex marriage and forced funding of abortion. Last week, the Supreme Court heard a landmark case on whether the federal government can compel a business to fund abortion drugs in defiance of the religious beliefs of the business owner. It’s merely one such case amid a flurry of lawsuits that even includes the Little Sisters of the Poor. Or, consider these situations involving gay marriage:

In Oregon, a couple that owns a bakery, the Kleins, are being sued and called before the state for not making a wedding cake for a same-sex ceremony. The Kleins note that being forced to make such a cake against their will would violate their Christian beliefs and freedom of conscience.

In Colorado, another bakery owner, Jack Phillips, awaits a possible jail sentence for refusing to bake a wedding cake for a gay couple.

In Washington State,a florist is being prosecuted by the state’s attorney general for declining to provide flowers for a same-sex wedding.

In Ocean Grove, New Jersey, a Methodist camp meeting association lost its tax-exempt status for declining its wedding pavilion to two lesbians for a same-sex ceremony.

In New Mexico, the state Supreme Court ruled against the owners of Elane Photography, judging that they violated the state’s Human Rights Act by refusing to take pictures for a same-sex ceremony. The ACLU opposed Elane Photography, as did one of the justices, who recognized that the ruling violated Elane’s religious freedom but argued that such is the price of “citizenship” in America today.

In Massachusetts and Illinois, Catholic Charities, one of the oldest and most established private adoption agencies in America, has been forced to cease services because it will not provide adoptive children to gay couples.

And then there’s any number of figures demonized, boycotted, picketed, pressured, or fired for expressing their opposition to gay marriage: the president of Chick-fil-A, the owner of Barilla pasta, Craig James of Fox Sports, or Arizona’s governor.

These are merely a few of many examples. All involve religious believers invoking their sacred First Amendment rights, only to have those rights rejected by those describing themselves as “liberal” and professing “diversity” and “tolerance.” In truth, you are not free to disagree with liberals on this issue. They won’t let you. They will compel you. They will see you in court, in bankruptcy, maybe even in jail.

Liberals tolerate only what they agree with.

But what’s really going on here? What’s the bigger picture? Well, these actions of liberals/progressives aren’t a surprise when you delve deeper into the logic of their ideology. Consider:

Liberals/progressives have a hierarchy of rights. They don’t look at competing rights in a pluralist system in the typical way that we’ve long been accustomed to in America. For instance, Americans typically—through the political and judicial process—have carefully sought to balance competing rights: property rights, civil rights, religious liberty, freedom of conscience, speech, press, federal rights, state rights, the right to life, and so forth. Picture all of these rights laid out in a line, with each prudently considered among the others, and with respect to the others.

Unfortunately, that is not how liberals/progressives operate. They act according to a hierarchy of rights that—consistent with progressivism—is always progressing, or changing, or evolving. Right now, for liberals/progressives, sitting atop the totem pole in this hierarchy are so-called “marriage rights” and “abortion rights.” In the past, they called these things not rights but “gay marriage” or “freedom of choice.” Quite shrewdly, however, they’ve framed these “freedoms” as “rights,” along the lines of “civil rights.” Equally shrewd, they push them forward under the mantra of “tolerance.” It’s a brilliant move that’s working extremely effectively with millions of Americans.

Again, the startling irony is that these same people fancy themselves champions of tolerance, diversity, and “equal rights.” That has never been accurate, and they are proving it now with special uncompromising rigidity. They are pursuing what they’ve always pursued: selective tolerance, selective diversity, and selective equal rights. Religious rights are not among their select.

A quotation that sums up this thinking comes from gay activist, law professor, and EEOC Commissioner Chai Feldblum. When asked about the conflict between gay rights and religious rights, Feldblum said, “I’m having a hard time coming up with any case in which religious liberty should win.”

That’s very clear. An attorney colleague of mine says of Feldblum: “Supposedly a Constitutional Law scholar, she holds that view despite the fact that religious freedom is actually in the Constitution!”

Yes, but to liberals/progressives it doesn’t matter. They have a hierarchy of rights, one that’s always changing. And right now, religious rights are their bottom-dwellers. For religious believers who disagree with them, too bad. They’ll see them in court.