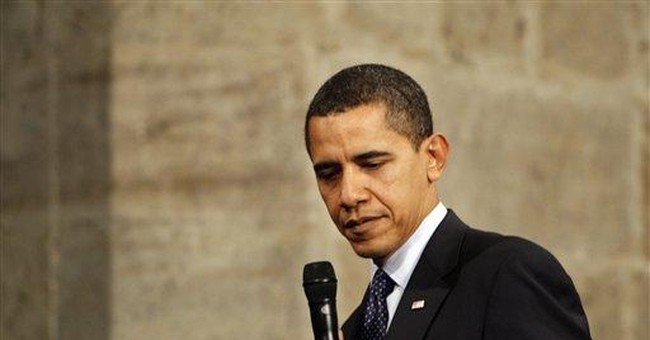 What did Reagan do—or, more importantly, didn’t do—in response to these “crises?” How was Ronald Reagan’s response different from what Barack Obama is doing?

In both cases, Reagan did the exact opposite of Obama’s massive government spending infusions. In fact, it’s worth noting that Bill Clinton—listen up, Democrats—didn’t invoke Obama’s method when he faced recessions at the very start and end of his presidency. (That’s another article for another time.)

As for the Reagan recession, the president waited extremely patiently—to the point where he drove his advisers nearly nuts—for his huge 1981 tax cuts to take effect. He didn’t spend money because he believed spending had been out-of-control, particularly since FDR’s New Deal and LBJ’s Great Society, which created systemic deficits. Reagan felt that high spending, high regulation, and high taxes had sapped the American economy of its vitality, and particularly its ability to rebound from recession. The economy needed to be freed in order to perform.

Reagan’s prescription rested on four pillars: tax cuts, deregulation, reductions in the rate of government spending, and a stable, carefully managed growth of the money supply. The federal income tax reduction was the centerpiece: Reagan secured a 25 percent across-the-board reduction over a three-year period, beginning in October 1981. The upper income marginal tax rate was dropped from 70 percent, which Reagan believed was punitive and stifling, to 28 percent.

By 1983, America had begun its longest peacetime economic expansion in history, cruising right through the 1987 market plunge.

What did Reagan do about the October 1987 crash? Basically nothing—certainly nothing like a massive government “stimulus.”

“Some people are talking of panic,” Reagan calmly confided to his diary. “Chrmn. of Stock Exchange is acting very upset.”

Those are Reagan’s only diary references to the financial crisis. With the economy freed, he was confident it would bounce back. Reagan let the economy correct itself.

That’s the big criticism. It isn’t accurate. It needs to be understood—now more than ever.

First off, know these crucial facts: The deficit under Ronald Reagan increased 35 percent, from an inherited deficit (from President Jimmy Carter) of $104 billion in 1980 to a final deficit of $141 billion in 1989. The deficit peaked at $236 billion in 1983, particularly because of the plummet in tax revenue during the recession. It began dropping steadily in 1986, continuing through the 1987 crash. (Source: Congressional Budget Office figures, “Historical Tables.”)

Compare that to what’s happening now, where the direct opposite of Reaganomics is being pursued by the liberal Democratic president and Congressional leadership:

President Obama inherited a record Bush deficit of $400 billion, but is generating a far worse $1.8-trillion deficit in his first year. (Source: Congressional Budget Office, March 20, 2009.) We’ve never seen anything like this. This unthinkable explosion is a direct result of the stunning government spending unleashed by Obama and the Democratic leadership in just eight weeks—an unheard of development in 233 years of American history.

So, think about this:

But what, exactly, caused the Reagan deficits? There were several factors: the recession of 1982-83, the Reagan defense spending—implemented to turn the screws on the Soviets—the domestic social spending by the Democratic Congress, and more. Some reasons were Reagan’s fault; others were Congress’ doing—both share blame in differing degrees.

Importantly, and despite what you’ve heard, Reagan’s tax cuts didn’t create the deficit. Tax revenues actually boomed from roughly $600 billion in 1981 to $1 trillion in 1989.

The primary cause of the deficit was recession and spending, mainly spending—as is always the case. It is especially the case right now under Obama, with the spending component utterly out-of-control.

The crucial lesson for today is that the best “stimulus” is one that relies on the tried-and-true American way: letting free individuals and entrepreneurs stimulate the economy through their own earnings and economic activity. Wealth confiscation and redistribution by government collectivists and central planners never works; unfortunately, it is that failed, extremely destructive method that Americans elected in November 2008.

For three decades now, the minority of Americans who make up the hard left have been trashing Reaganomics. Well, on November 4, 2008, for the first time in American history, they convinced enough voters to join them in electing the extreme opposite. At long last, they will pay for the economic consequences of their ideology, as will their children and grandchildren.