Paul Jacob
|
Posted: Jan 17, 2016 12:01 AM
Share   Tweet
The opinions expressed by columnists are their own and do not necessarily represent the views of Townhall.com. 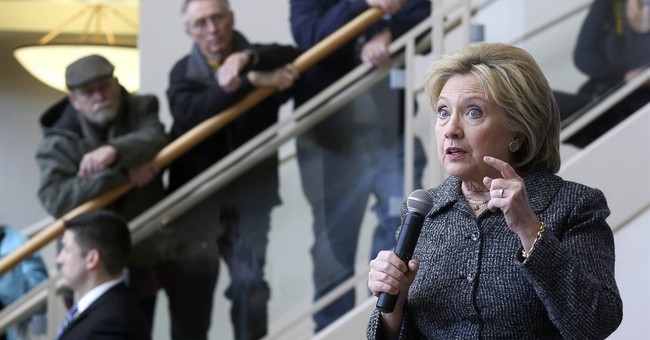 The political equivalent of the Nutty Professor, Vermont’s independent, democratic socialist U.S. Sen. Bernie Sanders, is closing the gap against Hillary Clinton, Inc. among Democrats in Iowa and nationally as the electorate begins to focus on the first caucus. In this sketchy, rough-and-tumble land of the free, divine right is actually considered wrong.

What can even “the smartest woman in the world” do about that?

This week, perhaps decided on a 3 a.m. phone call, the former First Lady of Arkansas, and then of all these United States, and later U.S. Senator from the Empire State of New York, and most recently the frequent-est flying-est Secretary of State the world of reset buttons and regime change has ever known, determined it was now finally time to unveil the newest Clintonian super-weapon: former (and perhaps soon to be again) First Daughter Chelsea Clinton.

Yes, you know her as a savvy media star, who years back garnered a fat $600,000 a year salary from NBC, even without any experience, and for what seemed like part-time work. Her once poverty-stricken parents were undoubtedly proud.

Of course, Chelsea thinks altogether differently about money than do her parents. “I was curious if I could care about [money] on some fundamental level,” the young Clinton told the London Telegraph, “and I couldn’t.”

Poor Chelsea had to leave that sweet NBC gig when her mom’s presidential campaign commenced, hopefully without too much economic suffering. Her net worth has been pegged at merely $15 million — most coming from her work for Avenue Capital Investment Group and McKinsey & Co. — but she clearly doesn’t even think about money.

At heart, Chelsea Clinton is just one of the little people, whatever they’re like.

Still, her new role with her mother’s campaign is certainly new for her: attack dog. You might expect former President Bill Clinton to serve in that position, but Donald Trump appears to have turned him into a puppy dog by bringing up his past philandering, perjury and worse: charges of sexual harassment and rape.

And women’s rights uber-advocate Hillary Clinton has forcefully and unequivocally said such accusations “have the right to be believed.”

It’s a charge the liberal Politifact found to be “mostly false.” (Oh, what a chip off the old block!)

The Sanders campaign quickly fired back that the young Clinton was “wrong” and disingenuously ignoring the fact that Sanders would bestow government-paid healthcare coverage on every American. For free! (Unless you happen to pay taxes, that is. Then, it’d be very expensive.)

“The thing that tells you as much as anything about [the Clinton campaign’s] current state of mind is Chelsea going on the attack. It tells you everything you need to know,” one Democratic strategist told The Hill anonymously, afraid to speak publicly out of fear for his career and physical well-being. “That this [challenge from Sanders] is real and they’ve got to be freaking out.”

“I’m 100 percent for sharp elbows and blunt contrasts in campaigns, including paid negative ads in every possible medium,” offered the brave Democratic strategist Craig Varoga. “But I cringe at the idea of using close family members to carry personal attacks, especially when the opponent is well-positioned to say the attack is untrue and desperate.”

Liberal Rep. RaÃºl Grijalva (D-Ariz.) was “surprised” by the attack from Chelsea and “thought it was out of character. It seems the Clinton campaign is going into full destruction mode very early in this process.”

Destruction hasn’t been the result. “As of now, we are at about $1.4 million raised since yesterday when the panic attacks by the Clinton campaign began,” reported a Sanders campaign spokesman. “We’ve gotten 47,000 contributions. We’re projecting 60,000 donations. Even for our people-powered campaign, this is pretty darn impressive.”

Beyond the misleading nature of the former First Daughter’s comments, there are big problems for Hillary Clinton even when she accurately bashes Sen. Sanders over his far too expensive single-payer healthcare schemes: (1) progressive Democrats like single-payer pipe-dreams and vote in Democratic presidential primaries, and (2) she, too, has supported and claims to continue to support government-run, single-payer national healthcare.

After the Chelsea attack-dog hub-bub this week, Rachel Maddow asked Hillary Clinton if she disagrees “with single-payer as a goal?” Clinton responded, “No. I agree with universal health care,” adding “No matter how you get there.”

Hillary vehemently defended her daughter, of course. Still, even the 2008 version of Hillary took issue with her daughter’s slap at Sanders.

Back then, rival Sen. Barack Obama took issue with a single-payer system Hillary was promoting. Mrs. Clinton railed against his “tactics right out of Karl Rove’s playbook,” and asked, “Since when do Democrats attack one another on universal healthcare?”

“This is wrong and every Democrat should be outraged,” she continued. “So shame on you, Barack Obama!”

Republicans have never trusted Hillary Clinton. Polls show independent-minded voters find her less than honest. Now even Democrats are witnessing her campaign throw caution and credibility to the wind.

Not a Clinton, in other words.