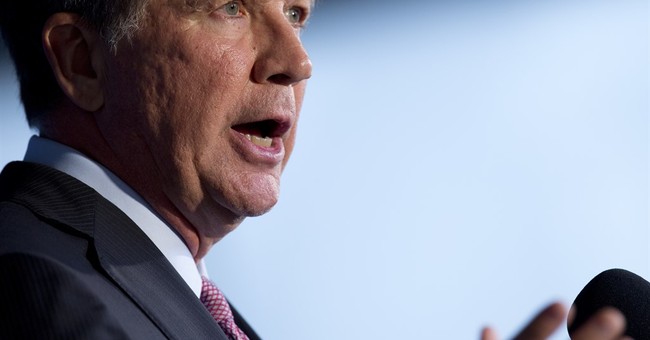 On Friday, presidential candidate and Ohio Governor John Kasich rambled on for most of an hour before a room full of C&S Wholesale Grocers employees in Keene, New Hampshire. The last question came from a young man who brought up theCitizens Uniteddecision, and asked if Kasich “had a plan to limit the influence of money in politics.”

Hmmm.I know I’m always thinking that.But this is the first indication that members of Congress realize their own screaming conflict of interest in legislating the rules and regulations of campaign fundraising, and acknowledge the absolute mess their laws have made.

Kasich then claimed emphatically, “I don’t care who gives me money. It means nothing to me.”

He added, “I don’t have a lot of billionaires that are, like, all excited about me.”

That I found very believable.

Then, Gov. Kasich stumbled onto the term limits issue, coming out squarely against the idea. “We put term limits in in Ohio,” he informed. “You know what it’s effect is? It means the staff's running the place now.”

“Now who would you rather have run the place: the elected official or the staff?” he queried the coerced crowd in attendance. “Because the staff doesn’t run for anything. They just exist forever.”

No doubt, it’s a direct result of the Ohio governor’s embrace of the Medicaid expansion through Obamacare, which Kasich argues was actually mandated in the Bible (Matthew 25, precisely). Those opposed to the costly expansion are, sadly, going to hell.

Did I mention John Kasich’s nickname is “The Pope”?

In most other states, staffs are of course hired by elected officials and serve at the pleasure of those elected officials. So, if politicians of the immaculate character of Mr. Kasich ever offered lame excuses for not stepping up to their own authority and responsibility, which he most certainly would not, this might possibly have been an example.

“So you elect somebody who’s term limited, what they say is, ‘We’ll just wait them out,’ right?” he continued. “That’s what happens with bureaucracy a lot. They’ll say, ‘Oh, this guy’s for change, well, he’ll be gone or she’ll be gone, we can go back to business as usual.’”

But then he asked himself, “Do I favor term limits?” And answered, “I do,”

Though, immediately concluding, “But that’s not going to fix anything.”

And then fixing his position by admitting, “It’ll fix a couple things.”

Well, not being a psychiatrist, I certainly cannot fix his diagnosis as Schizophrenia.

“You gotta understand, what fixes things is the character and the leadership.”

Mr. Kasich is suggesting the “fix” to what’s wrong in Washington is, well, Mr. Kasich. The leader. Thecharacter.

Politicians are often characters, but it is much tougher to determine whether they have character. For instance, after his 2010 election as governor, Kasich warned a room of lobbyists at a luncheon, “If you’re not on the bus, we will run you over with the bus. And I’m not kidding.”

Was it character or the lack thereof that compelled that statement?

Moreover, the upshot of the leadership argument politicians love to make seems to be ignoring the issues that matter to voters. To politicians issues are the means to win elections, while to voters elections are a means to address issues.

“I think I was in the Tea Party before there was a Tea Party,” he contends, even after crossing the actual Tea Party on a core issue like Medicaid expansion.

Yet, the governor raises an important aspect of the term limits notion, namely that “people have always worried about keeping their job. So, why do we expect the politician to go and do things that enrage people? Because when you go about cutting spending, you don’t make anybody happy. You make everybody mad. I know; I live it. Okay?”

Continuing, Kasich again asked, “So, why do we expect people to do that? Well, because a politician is not there for a lifetime job. A politician is someone who should go in, do public service and get out.”

Hard to think of a better argument for term limits — and not long, butshortlimits.

Kasich also contended that he “could have stayed in Congress for a hundred years.” Maybe, maybe not. But the fact that he thinks he had a 100-year lease on that powerful perch again argues for term limits.

Still, considering the menu of reforms to cure Washington dysfunction, the Ohioan said, “The gerrymandering bothers me more than anything else, and that’s something I’m going to go to war on if I’m president or if I’m governor.”

Excuse me, Gov. Kasich, but youaregovernor.

Rebecca Downs
Francis Collins: Children Under 12 Wearing Masks is 'Really Smart Thing to Do' and 'Sacrifice Worth Making'
Rebecca Downs