A Tree Fell on Campaign Trail 2015 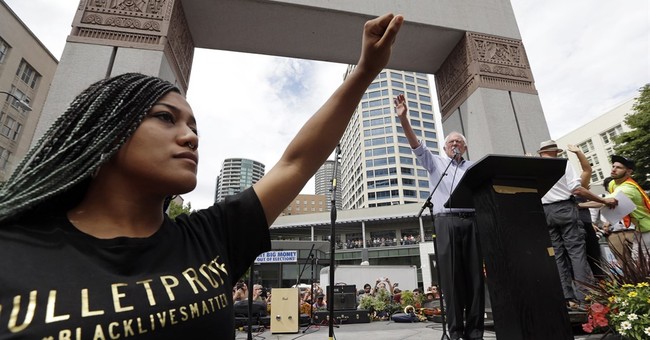 “Thank you, Seattle, for being one of the most progressive cities in the United States of America,” socialist-cum-Democratic presidential candidate Bernie Sanders shouted to the large crowd in the City of Goodwill.

Seconds later, two women with a local Black Lives Matter group jumped the stage, threatening to shut down the event. Quickly, they were rewarded for their extortion-by-tantrum. Sen. Sanders and company relinquished the microphone, podium and stage.

That was the sound of Sanders’s “presidential timber” — his ability to stand up in the face of conflict — come crashing down. With a thunderous thud.

Now, this is not a case of a tree falling in a forest with no one to hear it. No deep metaphysical questions arise. It’s all ethical. The event happened in public, in one of Sanders’s huge, popular campaign stops — the kind that sends chills down the spine of his competitor and fellow demagogue, Hillary Clinton. It’s on YouTube, where anyone can watch him cede ground to a few African-American activists.

Now, the kidnapped crowd did manage to protest the obvious and inappropriate violation. Initially. The booing was loud too, but . . . this was a progressive event, and progressives have a problem. They have based far too much of their world view on a Great Chain of Oppression, a hierarchy of victim groups. And African-Americans are their most cherished victim group.

Progressives habitually and notoriously exercise most of their sense of self-righteousness by calling other folks racists. But, in Seattle and elsewhere, Bernie’s followers are mostly white. And when the Seattle progressives were screamed at by upstaging protester Marissa Johnson, called “a bunch of screaming white racists” who practice “white supremacist liberalism,” they quivered.

Why, their favorite victim group just called them . . . racists!

“I was going to tell Bernie how racist this city is, filled with its progressives, but you did it for me,” Johnson clarified.

Angry audience members yelled, “How dare you?!” and “How dare she call me a racist.”

But she dared. Why? She had been well schooled in progressive victim-trumping. She had the better hand.

“You guys are full of bull-$@%# with your â€˜black lives matter,’” she chided, acknowledging that the event had already recognized the anniversary of Michael Brown’s shooting in Ferguson, Missouri.

What a fascinating marriage of outrage and entitlement!

And yet . . . real grievances abound.

“Welcome to Seattle,” Johnson told Bernie, “where our Seattle Police Department has been under federal consent decree for the past three years, and yet has been riddled by use of force, racial profiling, and scandals throughout the year.”

But none of these bullying theatrics will solve anything. Not in the least.

It did prove, however, a more-than-adequate test of Sanders’s mettle, I mean timber. It’s hollow. It booms and whooshes . . . as it tumbles to the dirt, after being pushed over.

Bullying apparently works even at major political events. The bullies, here, effectively exercised a “right to be heard” not because they rented the space, but because, well, they had a cause, a complaint, and that apparently trumps everything else.

Speaking of Trump, the Donald just called out Bernie Sanders and vowed he would never relinquish his microphone to such tactics.

I’m not a fan of Mr. Trump’s policies, or his gutter-based personal attacks on others, but he is correct that Sen. Sanders can’t even stand up for his own speech rights, much less ours.

Apparently fearing the loudmouths, Sanders proved unwilling to confront them. A leader would have scolded them for intrusion, for lack of a legal right to impede what was, after all, his event. A truly smart politician would also have had the wit to address their complaints and turn them over to his side. If not, he could have let them protest in the crowd, but not take the stage.

He should have ushered them off, or instructed one of his people to take their arms and usher them off stage.

That he didn’t showed his true color. Not white. Not black. Not blue. Not commie-pinko red.

Yellow . . . the traditional color of cowardice.

But it is worse than that. Sanders and his “progressive” Democrat comrades (governing cities like Baltimore and Seattle) must take responsibility for the results of their policies, and admit that the black voices shouting against racism are shouting at them.

A sort of poetic justice is operating here. After all, progressives set their whole predicament up. By abandoning principles and promoting the corrosive notion of class warfare with special colors as trumps, they’ve shown themselves to be weak: low counting cards in the game they’ve created.

The Seattle event was quite a moment. It is reminiscent, in a way, of John Kerry’s “don’t taze me, bro!” event, years ago, where the Democratic pol proved able to control neither one only slightly offensive loudmouth nor the goons who went into overkill.

But whether the Seattle shout-down will prove a turning point in history, or just another notch in America’s “progressive” abandonment of civility, reason, and the rule of law, only time will tell.