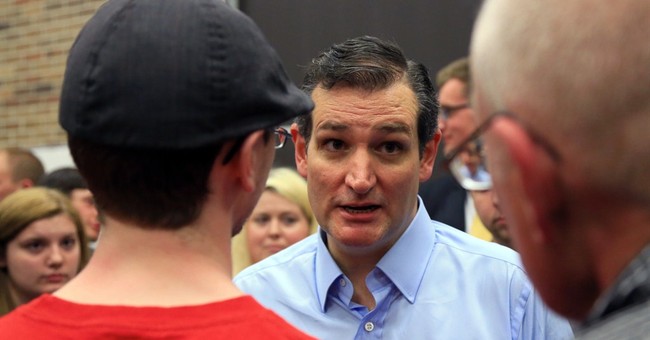 Is it a good thing or a bad thing that a presidential candidate demonstrates an ability to raise enough money to effectively reach the “inhabitants of America” with his political message?

One of Diane’s guests, Neal King, Jr., with the Wall Street Journal, explained that all four PACs associated with the Cruz effort sport the “Keep the Promise” name and distinguish among themselves with the simple numbering of one through four. The name marks a noble sentiment, indeed, and perhaps Cruz supporters are also demonstrating that they can count.

Admittedly, both that old-fashioned sentiment and the ability to count are quite alien to the Washington culture.

Shocked, King went on to explain that the $31 million haul reported for Cruz after merely a week roughly matches what Mitt Romney raised in the first six months of his 2012 presidential campaign. And Romney was that cycle’s top GOP fundraiser.

Mark Halperin, managing editor of Bloomberg Politics, also expressed his astonishment. He dubbed the Cruz fundraising “shock-and-awe,” and got in early in the contest to cook up clichés for superlatives, perhaps being the first to dub it officially “eye-popping.”

Granted, $31 million can get a message out to the public . . . let’s just hope it doesn’t poke more than a few eyes out in the process.

“What we’re looking at,” Mr. King added breathlessly, “is a totally transformed electoral landscape, where two or three people can put up unlimited amounts of money for what might be marginal candidates and totally give them life.”

Life is good, no?

Of course, no one has “unlimited” money. Not even Bill Gates. Not even the politicians with their hands in our pockets and the use of a printing press.

Nor does Mr. King have any knowledge that it is two or three people donating this astonishment-worthy amount. He almost assuredly realizes there are likely many more donors, but is surmising a small number to fit his anti-big money (and undoubtedly anti-Cruz) slant.

But say it were just one wealthy person willing to give such a sizable figure. The rationale for that one four-part donation would be the same as if it had been contributed by a hundred donors — or a thousand, or a million: to allow the Texas senator to speak out as a candidate and share with the public the principles they mutually espouse. What is the harm? Does the Washington press corps, or society as an abstracted whole, really have an interest in silencing certain candidates and their ideas?

Innovators and entrepreneurs and dreamers are just as necessary in the political world for the same reasons as they are in the economic sphere. I adore these folks. But I’m also always glad when they invest their own money — that is, not my money — in bringing a new product or new idea or a new candidate to market.

Then the people can freely decide.

Maybe we have finally stumbled on the real reason for the negativity toward Cruz’s financial windfall . . . at least by so many liberal chatterers. Big donors, like grassroots donors, effectively undermine the status of political gatekeepers. King and others with big media megaphones insist, as their stock in trade, that they are the ones with the awesome responsibility of designating candidates “marginal” or “mandated.”

But according to standard democratic theory and practice, it is the voters who make those decisions.

At least, voters make the decision when the First Amendment allows resources to be freely donated to speak out to those voters.

And that, only, when the Federal Election Commission cannot block such candidates in favor of the careerists who have built up political networks for decades.

Fear-mongers will shudder and scream that wealthy people are buying the election! But, oh, how easily we can reject a well-funded bad idea or a well-financed (but faulty) candidate.

Neither contributing money nor speaking out politically is a crime. Nor unseemly. In fact, it’s a constitutional right.

And, yes, Mr. King may be correct: “This is transformational.”