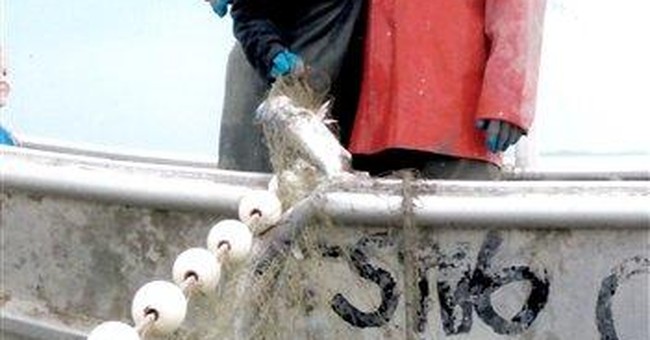 And caught in that vortex, as he explains, is one of that state’s smallest counties, Wahkiakum.

It used to be a farming, fishing, logging community. But not much farming, fishing, or logging goes on any more. It’s filling up with retirees, people who (for reasons known only to them) don’t mind lots and lots of rain.

The farmland is far from the major distribution center — Wahkiakum County is fairly isolated. Though I’ve traveled to the Pacific Northwest umpteen times, I’ve never driven through Wahkiakum. (I just have friends there, who keep me updated.) Naturalist Robert Michael Pyle calls it a “forgotten place” in the subtitle to his recent book Sky Time in Grays River.

The fish, of course, have mostly gone away. The salmon’s run on the Columbia has been physically hampered by numerous dams, and the waters are warmer, now, than salmon prefer (blame that on the dams, too, I guess . . . though when you think about it, we civilized people like warmth, and there may be heat spillover everywhere, for all I know). Fish runs in the local tributaries aren’t much any more, either, from what I hear — despite the work of state hatcheries.

The logging industry, too, has changed in the last 30 years. Huge fir and spruce and hemlock and the occasional cedar used to be pulled out of the forests, almost constantly, hauled out by train, tugboats, and log trucks. Now the trees harvested tend to be quite small, the kind Wahkiakum folk used to titter at when they visited places like Maine or Minnesota.

But it’s not the private economy that is really worrisome, in this wet area amidst the hills of the coastal range on the north side of the Columbia. It’s the county government that’s in danger. At the beginning of the month it was sliding into deep debt — $1.4 million. That may not seem like a lot, but the county has less than 4,000 people in it. The figure is not pocket change.

The article in the News followed a slightly less doom-and-gloom piece in the county’s paper of record, The Wahkiakum County Eagle, a week or so earlier. Both mention the debt. Both discuss the layoffs. And while the local paper doesn’t go on and on about the political negotiations with the state government for compensation regarding lost timber revenues, like the News does, it doesn’t really need to. The Eagle’s been covering that issue for years.

But neither cites the one other factor that has put the county furthest out to teeter on the edge of the precipice, ready to be sucked in by that dread “death spiral”: The county’s medical clinic.

Years ago this little enterprise was helmed by a doctor or two plus a nurse working as receptionist. Progress occurs, of course, and it grew into a clinic. And, in the context of modern medicine, with its multiple government-influenced and -prescribed policies, plus ballooning insurance costs, the clinic did not maintain a nose-above-water status. It’s last private owner, PeaceHealth, pulled out four years ago.

And the county nabbed it.

The commissioners who set out to “save the clinic” prophesied dire economic degradation if the clinic were allowed to fail. In classic modern political fashion, they just had to prop it up.

But they claim they had no idea of the expenses. Running the clinic has cost the county well over a quarter million dollars per year.

So, that extra burden, added onto so many other burdens, has pushed the county to the edge of ruin.

The current commissioners knew years ago that the county’s financial security was at threat. They knew revenues were falling. The little county, like many in the Evergreen State, got quite a bit of its revenue from timber sales. During the Depression, I’m told, foreclosed timberland wound up in the hands of the county. And the state’s Department of Natural Resources has tried to manage timber sales from those acres, giving the county a substantial revenue stream — well over half its income.

Until the marbled murrelet hit the federal government’s endangered species list, that is. This little water bird has a peculiar breeding habit. It nests in old growth trees. And the state’s DNR “set aside about 3,000 of the county government’s 13,000 timber acres to protect and study the bird,” informs the News.

Ever since then, revenues have fallen. And continue to fall. Add to all this falling lumber prices and an overestimate for this year’s revenue and the county was looking to borrow money to pay its bills, another $500,000 before year’s end.

Now the commissioners are rushing around laying people off, closing programs, etc. etc. They haven’t had the nerve to let the clinic go, though.

Such is politics in America, today. We risk the insolvency of our governments, propping up failed businesses. Because politicians pretend they can repeal the laws of markets, can ignore the failure of demand to support supply at favored supplier’s preferred prices, they simply trudge on throwing your tax dollars at the problem.

Until they can’t any longer, of course.

If little Wahkiakum County goes broke, not a whole lot of people will really care. The county has so few voters. Do national politicians really care? Do you? Nope.

Besides, if it goes under, financially, it can merge into nearby Cowlitz and Pacific counties, one or both.

But the U.S. government — itself the cause of some of Wahkiakum’s biggest problems — remains, like its own death vortex, unmoved if not unmoving. It could face a similar insolvency fate any year now.

And the U.S. can’t just “merge” into nearby Canada or Mexico to solve its problems.

It might make sense for people around the U.S. to take some note of the tiny, rural Wahkiakum County. Its travails may pre-echo our country’s own.