Let's Go To The Dogs

Paul Greenberg
|
Posted: Aug 08, 2017 12:01 AM
Share   Tweet
The opinions expressed by columnists are their own and do not necessarily represent the views of Townhall.com. 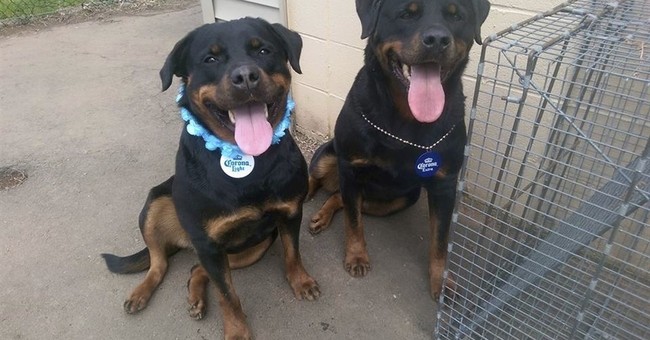 George Orwell, best known for his dystopian glimpses of a future to be dreaded, was also a master of the light essay. In one of them, he described his favorite pub: The Moon Under Water, where an Englishman of the old school could take the family for a plowman's special that appealed to the curious English taste for snacks like liverwurst sandwiches, mussels, cheese and other tidbits that might not appeal to an American's palate but certainly did to John Bull's culinary peculiarities. All served while the customer quaffed a warm British beer in a traditional glass free of handles.

What's more, the barmaid knew her regular customers by name, traded village gossip, and took all too precise aim at her patrons' own foibles. As for what might laughingly be called the decor of the place, "everything has the solid, comfortable ugliness of the 19th century."

To a certain kind of Englishman, it was all too good to be true, and indeed it wasn't -- just a fictive vision made of whole Irish-tweed cloth.

Happily, there's a place that's not only ideal but real that serves both man and beast right here in Arkansas, the American state. It's called the Bark Bar, and it's smack in the middle of the state in Little Rock, where it offers its canine customers an off-the-leash dining and recreational experience. Hot dawg!

Both canine and human patrons of the Bark Bar can go there in the casual attire or lack of same suitable in this August heat. While the poor humans aren't allowed to doff all their garments, the dogs are free to do what comes naturally. And that would seem to include sticking with their masters or mistresses till death do them part.

A dog's loyalty to his master or mistress may become legendary. While other tales of canine loyalty are as up-to-date as the daily paper. As in this item from the indispensable In the News column just the other day: "Jonathan Perok, a police spokesman in Prince William County, Va., reported that a 10-year-old girl in Woodbridge was out walking her dog when a stranger approached and grabbed her by the arm, but was chased off when the dog bit him." Good dog!

Some dogs display a fidelity to their owner that has been memorialized by statues in their honor around the world. Consider the story from Japan of Hachiko, the dog who waited for his master's return long after his human had died. No wonder the common dog's name, Fido, is Latin for I am Faithful, as in the Marine Corps' motto, Semper Fi, or Always Faithful.

Dogs will perform the most extraordinary feats to serve and protect their owners. Or is it they who are the real owners, protectors and caretakers, and we mere humans who are in their charge rather than the other way around? At any rate, it's a partnership formed over time immemorial. For dogs will do the most impressive things on behalf of those who fancy themselves to be their owners.

A dog's loyalty is as steadfast as any Christian believer's awaiting the glorious resurrection of his master. If there are tricks we humans teach them, there are many things they teach us, often by sterling and inspiring example.

Monuments to canine loyalty have been put up around the world, for our best friends do not discriminate when it comes to race, creed or color. They could be models for civil rights legislation, being largely color blind. We mere Homo sapiens might be taught a great deal by Canis lupus familiaris if only we were susceptible to being as well-trained as they are. Wise old Solomon proposed that we sluggards learn from another species, the ant, when it comes to building our own lives and protecting those of other species. But he might as well have recommended the dog as a role model and exemplar.

I have the most convenient of relationships with our canine friends. While not owning a dog -- or, rather, a dog's not owning me -- I long have enjoyed that species' attention and devotion. It's a matter of a simple division of labor: Happy to pet them and watch them bound about, I have nothing to do with all the labor and expense of feeding, maintaining, washing and medicating them when necessary. You'd be more than accurate to call me a parasite when it comes to dogs, for it's they who guard and amuse me more than I ever do anything for them. So the least I can do for one of their kind is to take him to the Bark Bar for a stroll and a little refreshment.

It's a dog's life, whiners may complain, but it doesn't seem too bad at the Bark Bar. And that means you, Fido. Or as we say in these parts during the dog days of August, Arf! Arf!