Paul Greenberg
|
Posted: May 24, 2017 12:01 AM
Share   Tweet
The opinions expressed by columnists are their own and do not necessarily represent the views of Townhall.com. 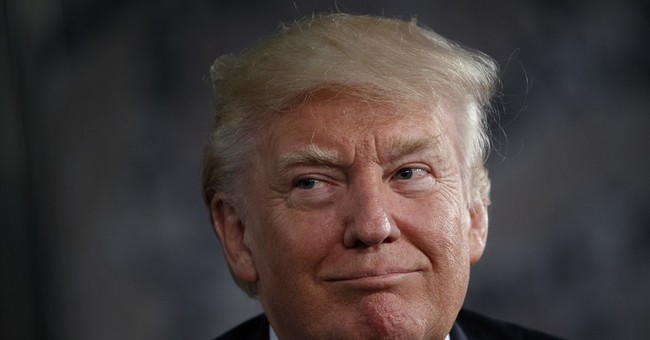 Call it the political equivalent of supply-side economics: The supply of scandal in the news always rises to meet the demand. But as in the economy, inflation soon sets in and each scandal seems to have less effect on a public grown insensitive. For if everything is a scandal, then nothing is. And what's supposed to shock no longer does. Especially when a president at the center of the supposed firestorm seems to be enjoying it as he tweets merrily along.

Nothing seems to amuse Donald J. Trump like the impotence of his critics; he appears to revel in it. His critics call him Nixonian in honor of his devious ways, but they might as well refer to him as Clintonesque. Each president seems to handle scandals in his own way. In this case, the Donald is much more Jacksonian than Nixonian, choosing defiance over compliance with the opposition's demands. Richard M. Nixon let his FBI director Patrick Gray twist slowly in the wind. But this president simply dropped James Comey, who's no longer his FBI director. He did the same to Michael Flynn, who was his national security adviser. Who'll be next to go, nobody knows, but one can be sure there are a lot of folks sweating in the White House.

Was James Comey, the now former head of the FBI, fired because his decisions appeared to favor Hillary Clinton in last year's heated presidential campaign or because earlier his decisions seemed to disfavor her? Why not both? Scandals don't seem to observe partisan lines; they have a way of slopping over.

Here in Arkansas, Treasurer Dennis Milligan remains a sure source of scandals, ticking them off like clockwork. This time he's been obliged to dismiss a crony from a $70,000-a-year job as the state's bond dealer because, uh oh, that official didn't have the college degree that the state's Board of Finance decided he should.

Treasurer Milligan instead proposed qualifications for the job tailor made for his choice, Ronald Roberson. Or as one member of the Board of Finance, Al Harkins, sensibly put it: "One of my concerns here is that we have someone making decisions at the investment level that does not have a degree to go along with it. And if anything should go wrong, I don't know who takes the heat. But it may be us if we set these standards." What's this, a sign of forethought and a sense of responsibility on the part of a state official? Will wonders never cease!

This is all a mere technicality, answers Treasurer Milligan, who as usual has much to answer for. It was left to Mr. Harkins to point out that "years of experience shouldn't replace requiring a degree." Unless the people of Arkansas don't believe the lip service our politicians pay to the importance of education, or at least the outward signs of it. As a character in a Gilbert & Sullivan operetta puts it when someone points out his contradictory claims, they were all merely "corroborative detail, intended to give artistic verisimilitude to an otherwise bald and unconvincing narrative."

Some of us might prefer a simple, honest, straightforward lie to the contortions into which politicians twist themselves while trying to defend the indefensible -- like kicking the can down the road to another session of Congress or the state Legislature. Or maybe adding a fourth branch of government -- the Office of Independent Prosecutor -- to the three and only three provided by the Constitution of the United States.

The first rule of good government -- keep it simple, keep it accountable, keep it understandable -- seems to have disappeared in this the spring of our discontent. The Constitution of the United States is an intricate document with wheels within wheels as each of the three branches of government balances the others. To quote an English statesman of some note named William E. Gladstone: "As the British constitution is the most subtle organism which has proceeded from the womb and the long gestation of progressive history, so the American Constitution is, as far as I can see, the most wonderful work ever struck off at a given time by the brain and purpose of man."

His tribute to our Constitution shines like a light through all the distracting glitter of this gilded age. Let us hold fast to his words through all the scandals that come and go as we natives grow restless on this side of the pond. For we Americans have matters more important to attend just now than just cutting each other up.