Written on the Snow

Paul Greenberg
|
Posted: Jan 13, 2017 12:01 AM
Share   Tweet
The opinions expressed by columnists are their own and do not necessarily represent the views of Townhall.com. 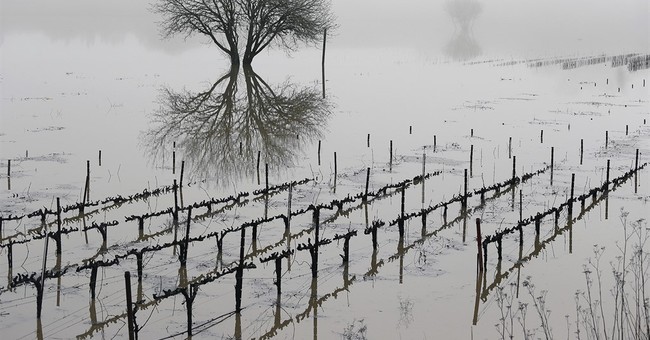 It was cold as death out there on Arkansas' snowy then icy streets, roads and highways over the weekend. It was one thing to go walking through a winter wonderland with the family at your side, the kids on their new sleds, but quite another to get in a car and go slip-sliding all over God's creation and maybe over a cliff.

According to the State Police, a man from Benton was killed in a one-car crash and a child died in a two-car collision in Van Buren County, each within 10 minutes of each other. Appearances can be not only deceiving but downright dangerous.

The Hon. (and ever-cautious) Asa Hutchinson canceled a speech to a Political Animals meeting in Jonesboro and wisely decided to stay home. Good decision, and a good example for others to follow. Things are not what they seem when viewed as some kind of Christmas-card scene instead of all-too-dangerous reality. One minute a driver may be crawling along at what he thinks is a safe, slow speed and the next his name is a candidate for tomorrow's obituary page. First comes the freeze, then the refreeze after sunset, and it's like trying to drive on an ice rink: No control whatsoever.

No wonder cars were running into each other on the icy-slick streets and roads as they took out mailboxes, street signs, one another and in one case a legendary restaurant in Little Rock -- the Oyster Bar -- at a bend in the street. "Even if the roads look OK," to quote a spokesperson for the State Police, "they still are dangerous. If you can stay home, stay home."

The first thing one may notice about the storm is the sound. Namely, there isn't any. Call it the sound of silence. It captures the attention as the ordinary random sounds of speeding trucks and fast SUVs never can. There's something inescapably merry about it, too, this eerie silence, as if this danse macabre could go on from here to eternity. Or as Emily Dickinson described snowflakes:

I counted till they danced so

Their slippers leaped the town --

And then I took a pencil

To note the rebels down --

And then they grew so jolly

I did resign the prig --

And ten of my once stately toes

Are marshalled for a jig!

Life and death are as mixed out there as they are everywhere in this ever revolving world spinning forever into an unforeseeable future. Never mind that people use a nonsensical phrase like "for the foreseeable future" when they can no more foresee it than they can peer through a snowstorm with any hope of making sense out of all those suddenly snow-covered shapes that used to be the landscape.

God bless and protect all the the Good Samaritans who do what they can to pull others out of ditches and back safely on the road to as they make their way to various destinations. Note that picture of Chad Denman right where it belonged -- on Saturday's front page -- as he helped push stuck cars up a road near Interstate 430 in North Little Rock, passing by one vehicle after another whose wheels could only spin against the elements. Where do such people come from? One suspects they're angels in disguise, but whatever their origin or motivation, let us give thanks for them.

There are lots of folks to be thankful for once the storm has passed, and even while it's passing through what is supposed to be a Southern state. Yankees, damned and otherwise, may be used to this kind of weather, but it would be much more convenient if they left it at home when they moved to the Natural State, which has been behaving anything but naturally these past few frozen days.

It's long been a subject of speculation: Where does the South end and the North begin in this dramatically different state? My best guess is at the Mammoth Orange in Redfield, Ark., but each to his own opinion.

This much all can be sure of: Our lives are as fleeting as yesterday's snow in a universe which has been evolving and revolving since the Big Bang set everything in motion, and the world hasn't stopped swirling about ever since. For as an eminent geophysicist played by Bette Davis once announced: Buckle your seat belts, it's going to be a bumpy night. Or words to that effect, for it's hard to remember the exact quote. It might as well have been written on snow.