Paul Greenberg
|
Posted: Dec 23, 2016 12:01 AM
Share   Tweet
The opinions expressed by columnists are their own and do not necessarily represent the views of Townhall.com. 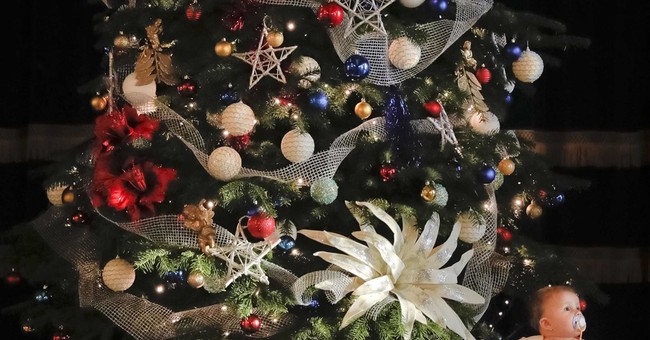 Can't you feel it? The Christmas spirit was making inroads even before Thanksgiving was over, making believers of everybody from ordinarily hard-hearted repo men to always loving moms:

Jim Ford, co-owner of Illini Asset Recovery in Red Bud, Ill., proceeded to repossess a car belonging to Stan and Pat Kipping, an elderly couple. But even as he was driving the car into the lot where all manner of repossessed vehicles are stored, he pulled over to the side of the road to call the bank in order to organize an online fundraiser to help out the old folks, and it proved an instant success. The couple's loan was paid off in no time.

Wanda Dench of Mesa, Ariz., learned that the text she'd sent her grandson asking him to Thanksgiving dinner had gone to 17-year-old Jamal Hinton instead. When he showed up she not only gave him a full Turkey Day meal with all the trimmings, but a nice warm grandmotherly hug.

Amy Larcinese, an elementary school principal in Herminie, Pa., said a Secret Santa had settled all unpaid meal accounts for students, including lunches for one child for the rest of the month after learning that the pupil had run up an especially high debt.

Charlie Pelizza, who's acting as project leader of the Midway Atoll wildlife refuge, has announced that Wisdom, a Laysan albatross first banded in 1956 and the oldest-known breeding bird, has returned to the island and is now incubating an egg. Apparently it isn't just Homo sapiens that fly home for the holidays.

Larry Jefferson, a retired Army veteran and native of Nashville, Ark., has landed a gig as the first black Santa at the Mall of America in Bloomington, Minn., where he announced that it's no big deal to him by now. "I'm still Santa. I just happen to be a Santa of color."

Dan Ariely, who writes for the Wall Street Journal, has come up with all kinds of recommendations for what to give your kid's teacher for Christmas, when it's still more blessed to give than receive. As he sums up his conclusions: A present for a teacher shouldn't be a financial transaction. Gift certificates get spent or forgotten. Flowers die and apples get eaten. You're much better off with a nonperishable gift that will strengthen your relationship between your family and the teacher. Consider giving a funky little piece of art, such as a decorated planter, made by your child, inspired by something he or she learned from the teacher. For it's important to keep Christmas close to home and heart.

Bob Rutland-Brown comes from a long line of United Methodist ministers, and it was expected that his generation would find its calling in church work, too -- the gift that never stops giving. It was in 1996, while he was still a teenager, that one of his cousins and an aunt had set up a nonprofit business that would provide legal aid to poor immigrants. Its name is Just Neighbors, and its founders could scarcely have chosen a better one.

By now the organization has become the United Methodist Committee on Relief, and has begun another chapter in the church's long history of helping migrants. Shades of the Hebrew Immigrant Aid Society that did so much to help Jewish refugees in another war-torn era. Bob Rutland-Brown notes that his denomination, too, has a history of helping immigrants and urges its congregants to "build bridges with migrants in their local communities" and "welcome newly arriving migrants."

He never did become an ordained minister, but it sounds as if the man has acquired something far more impressive than just another framed certificate on the wall. He seems to have found not just a vocation but a calling. So far this year his church has welcomed poor refugees from 108 countries, including Syria, South Sudan, Guatemala and most of all Mexico. "Our emphasis," he says, "is on those who are the most vulnerable with the fewest resources." And there's no danger of the world running out of those. Let us wish all peace on earth, good will toward men -- and a very Merry Christmas!