Paul Greenberg
|
Posted: Feb 02, 2016 12:01 AM
Share   Tweet
The opinions expressed by columnists are their own and do not necessarily represent the views of Townhall.com. 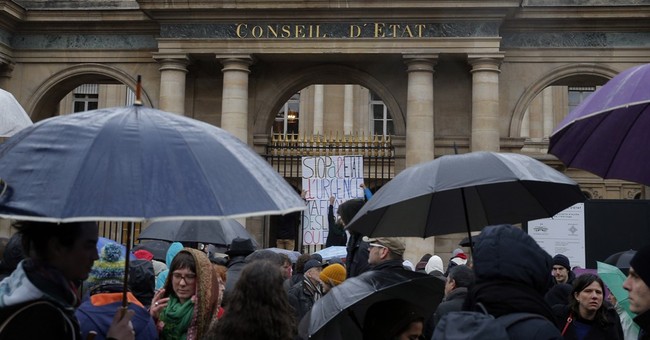 With apologies to Midge Decter, Jeanne Kirkpatrick and Golda Meir, among others, whose ideas and even words have been used in today's column.

The notion that freedom comes free from responsibility is as rampant today as any other delusion ever was. Duty, honor, country? What outmoded notions. As out-of-date as Robert E. Lee or the idea and ideal of liberal education in general. Or the recognition that family has always been the basic unit of society, not something our Advanced Thinkers can accept or reject. It is just there. It comes with being part of our species, and no number of protest marches or bitter complaints about victimization can change our very nature. If we will but recognize that there is such a thing as the nature of man -- and of woman -- at all. But there it is. Not a choice but a destiny. It is a fact, not a political goal that can be argued over. And to advocate that women require special treatment is to denigrate the sex, not elevate it.

Has there ever been a clearer expression of self-contempt than the argument for sexual quotas to make sure women get a fair share of society's goodies? When a woman is hired only to meet a quota, both her employer and she are left contemptuous of any real contribution she can make not just to her company but to her country. How do justice to women -- or men -- by encouraging what used to be called the fairer sex by patronizing her? Women can very well look after themselves, thank you. They don't need a Victorian fainting couch or a guaranteed job to confirm their worth.

But nowadays making a family may be seen as just another of life's rich and varied choices available to all of us. Marriage? That's just a synonym for enslavement to a patriarchal culture. We've got artificial insemination now. Who needs men?

You needn't sentimentalize the family to recognize that no society can exist without a fundamental respect for it, and when that disappears so does a rational society. And to be rational should not require ignoring the facts but respecting them.

Even to praise the family is an act of judgment rather than a recognition of its inevitability. Let's face it: Family can be one big bother. Yet the family remains better than any alternative to it ever devised -- a natural department of health, education and welfare that no other institution can compete with.

Would you prefer anarchy? Those who've tried it may find it only a way to assure that life is a Hobbesian nightmare: nasty, brutish and short. We may be familiar with the sophisticated electronic technologies of our times but ignorant of the very facts of life. To revere motherhood isn't the opposite of despising it. Motherhood is neither involuntary servitude nor glorious service. But it just is what it is, and to many if not most women, life would be incomplete without it, a fact all of us can be grateful for. Or we wouldn't be here at all.

There are just some ideas and ideals worth dying for. For if nothing is worth dying for, nothing is worth living for, either. Patriotism is not just a choice; it is a necessity if freedom is to survive in this world. Culture clash? What alternative is there to culture -- barbarism? Yet we live in the midst of a generation many of whose members seem to have been raised with the assumption that anything is possible but nothing is necessary. Not military service or financial prudence or anything at all. They act as if the old copybook maxims don't apply to their privileged caste -- even if they soon learn different. Experience may be a dear school but fools will learn in no other, God help them.

Ah, yes, God has been reduced to another optional choice. Today we argue over His very existence. Which is just fine as an exercise in free thought. But a better question would be: What is it that He demands of us? Then, having obeyed His commandments, all those debating points won't matter at all. Try it. You'll see. The basic question isn't whether we will accept Him or the world He created. Like so many other things, it just is.