In Defense of Empire 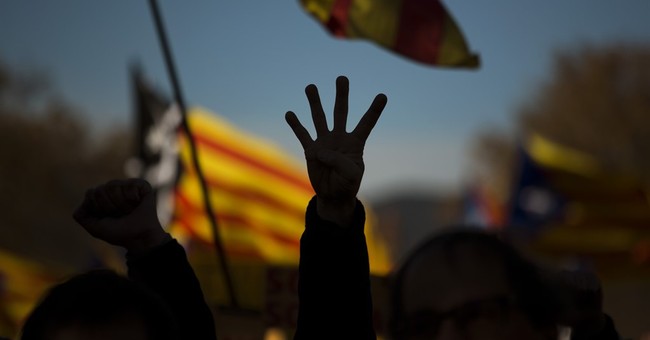 A new political party of the center and right, Ciudadanos, has arisen in Catalonia -- and delivered an impressive performance at the polls in Spain's regional elections back in September. It's as if a Unionist party had arisen in Mississippi back in 1860 to declare its support for this country's unity and integrity. Would it had! Think of how welcome, indeed saving, its influence might have been. In that respect, Catalans are proving more farsighted than Southerners did as the Union broke apart.

Today's secessionist fever in Europe represents a clear and more and more present danger not just to countries like Spain but to the best interests of Catalonia itself. In short, Viva Espana! Viva Catalonia!

Some folks will just never learn to leave more than well enough alone. Specifically, those nationalists in Scotland, along with their counterparts in Catalonia, who would like to break away and set up their own independent country. Never mind that the Scottish National Party has already lost one referendum, and the Catalans are deeply divided about the wisdom of turning their regional elections into a vote for independence.

Both regions now enjoy the best of both worlds: the security of belonging to a larger country and unhampered access to the market it provides. But there's no reasoning with nationalism once it gets carried away -- even if independence would invite ruinous results.

Imperialism has become a dirty word in our politically correct lexicon, yet throughout history it has offered minorities like the Scots and Catalans a degree of protection, and the world a degree of stability, that no other system could. That's been true at least since the Romans ruled the known world, and then were followed by a succession of other great empires.

The Ottomans once held sway from Algiers to Baghdad, and it was said the sun never set on the British Empire. Now that it's been broken apart, its former possessions in Africa have been reduced to ruin, anarchy and misrule by murderous tyrants like Idi Amin and his like.

The Austro-Hungarian Empire in the heart of Europe preserved the peace -- and protected the rights of an array of disparate peoples for half a century under good Franz Josef.

Yes, there are empires and there are empires. No one would confuse the Mongols with humanitarians, and the Russian empire has long been a prison-house of peoples. But those are scarcely the only models for imperialism, which can benefit both rulers and the ruled.

However unwillingly, this country, too, has amassed an empire, beginning with the Spanish-American War and its conquests. And when this country withdraws from the world, it leaves a vacuum that is soon filled by terrorists claiming to be a government. See the Middle East today. Having neglected the spreading civil war in Syria for some four years, with its ripples of refugees now spreading out all over Europe and beyond, this administration has invited suffering far and wide.

It's time -- past time -- that we stopped being paralyzed by a word -- imperialism -- and recognized not just the uses of imperialism but that, in these chaotic times, it can be a moral imperative.