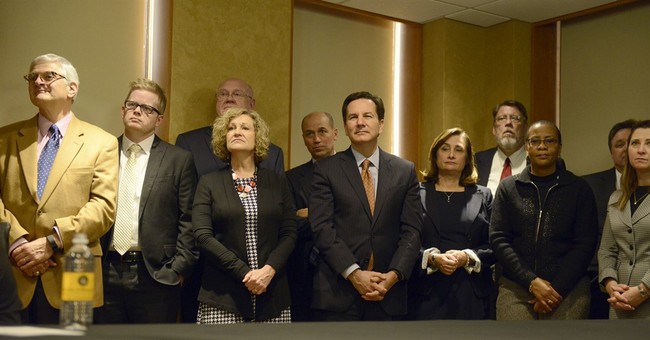 The decision of the University of Missouri's "governing" board to replace one chief executive of that school with a separate but equally powerless type was as predictable as the rest of this all too familiar farce. Different cast, same script. Different details, same unhappy ending. All as tiresome and unedifying as another traditional American institution that was a bad idea to begin with -- the minstrel show. This show is but an exercise is the purely symbolic politics of race. It has nothing to do with what a real university should be about, which is:

Education, the real thing, not just talk about it.

Hard work and solid accomplishment, not just empty symbolism, full of sound and fury but -- in the first and last analysis and all those in between -- signifying nothing.

Civil discourse, not pressure tactics for their own sakes.

Genuine hope and change, not just a lot of drama.

The search for quality regardless of race, color or national origin -- not making choices on the basis of those circumstances.

Real prestige, not pretentious titles for protest groups ("The Legion of Black Collegians").

The determination to find a genuine leader on a permanent basis, not another interim this or that.

As usual, this purely superficial performance is marked by a humorlessness that dooms any chance of real perspective or proportion.

All the fuss-'n'-feathers at Mizzou last week brings to mind those tall, stately columns standing in the middle of the university's red campus. Impressive as any classical ruin, they support nothing but the empty air above them.

Once upon a time, there was a real leader in American education, a lion in both scholarship and character, uncompromising in his devotion to both learning and self-discipline. His name was John Silber, and he transformed a trolley college called Boston University into one of this country's great universities. He did so thanks to the qualities he brought with him from his native Texas, where he was none too popular -- but the man cared nothing for popularity, refusing to monkey with grades or otherwise play games, but seeking only excellence.

It seems Boston's student protesters had put up a bunch of shacks in a corner of the campus; the shanties were supposed to represent revolutionary change, but were only an eyesore. So he took simple but decisive action: He called the cops. As he would recall later:

"I told the police, 'Go ask them three questions: Do you have a title to the property? (They built them on our property, not theirs.) Do you have a building permit? We have to have building permits. Have you got a clearance with the historical commission, because this is a historical district? If the answer is no to those three questions, then you tell them, "We'll give you about 15 minutes to remove your shanty. And if you don't, you'll be arrested." ' I said, 'Now, none of them are going to remove their shanty, so you're going to have to arrest them. But I want you to be very gentle, and I want you to take them to the paddy wagon singing, 'It's just a shanty in old shanty town. " ' Because one point I want to get across to these students is, I do not take them seriously. This is not some very deeply felt, high moral cause on their part; this is showboating of a very insincere kind by most of these students, and I want them to understand that I see through their pretensions."

Indeed he did. But naturally the mob prevailed in the face of a craven board, as it did on American campus after campus across the country in the turmoil of the '70s and '80s. Now it has prevailed again in Missouri. When will we learn to heed John Silber's words and follow his example? Instead of yielding again to every stray impulse advertised as Racial Justice or some other such catch phrase. Clearly we still have much to learn -- both at the University of Missouri and throughout the country.