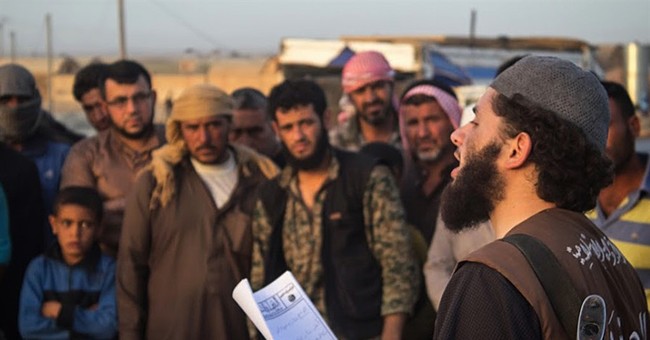 Oh, yes, the War on Terror -- remember? Or is it Terror's war on us? And against civilized humanity in general. Its object? The object of terrorism, Lenin is supposed to have said, is to terrorize. Nothing more. Terrorism requires no reason, only excuses, and there'll be plenty of time now, after the bloodbath in Paris, for the terrorists to come up with any number of them -- even if none are persuasive. It's the terror that matters to them, not the reasons for it -- or lack of them. See these still unexplained attacks last weekend when a great Western capital was terrorized. Call it terror for its own sake.

The long war against terror just got longer -- and bloodier -- as the City of Light became a city of horrors. Last time we dared look, the death toll in Paris had already soared above a hundred. And we all had better look -- all around and up and down. Because we're all being hunted. Turn our backs for an instant and the enemy will strike. Suddenly, terribly, without warning or prelude. Because it's not just our freedom, precious as it is, that is his target but our very lives.

Yes, now we know better -- or should -- than to ask as we once did in the long-ago opening stages of this long, long war why the enemy hates us. It doesn't matter why. He just does. Fanaticism needs no rationalizations for murder. Time enough to come up with the latter, or even while the blood is still being washed off the sidewalks of Paris' once lovely boulevards, or scrubbed away inside the city's clubs, stadiums, restaurants ... you name it. The whole city has become one big crime scene.

Now we know better -- or should -- than to turn our backs on these killers. They'll strike us down in an instant given the chance.

Now we know better -- or should -- than to be squeamish about any alliances of convenience we make in this unending war, even with some of the world's most brutal and repressive regimes if that's what it takes to wage this war against terror. And it doubtless will. Just as we made common cause with Our Fighting Russian allies during the Second World War to defeat Nazi Germany's armies. No, it wasn't a very palatable choice, the one between Stalin and Hitler, only a necessary one. You don't always have the luxury of choosing your allies when fighting for your life.

Now we know better -- or should -- than to put anything before wiping this enemy off the face of the earth. Whatever it's calling itself these days (ISIS? Islamic State?), it's just as treacherous.

Now we know better -- or should -- than to abandon allies like the oft-betrayed but ever-faithful Kurds and always beleaguered Israelis, who have their own war on terror to wage.

Now we know better -- or should by now -- than to ignore the kind of power vacuum that develops when America lets a civil war like the one in Syria, now in its fifth year, go on and on while looking the other way. It fills with terrorists who soon enough pose a serious threat to us, our allies and the whole civilized world. As bloody events in Paris last weekend demonstrated.

Speaking at still another "peace" conference in Austria, our distinguished if feckless secretary of state, John Kerry, deplored the conflict in Syria, which has cost millions their homes and lives, and roiled the whole world. He has to know his (and former Secretary of State Hillary Clinton's) abdication of responsibility in Syria amounted to an invitation to disaster, which erupted again last weekend in Paris.

A French official told the Wall Street Journal even as the massacre was occurring that it seemed to have some connection with all the turmoil spilling out of Syria's civil war. Ya think? Having sown these stormy winds, Washington and the world now are reaping the whirlwind.

Now we know -- or should -- that there are all kinds of excuses but no good reasons to withdraw from the world rather than choosing to defend it and ourselves. The cost of our apathy was evident in Paris this past weekend, and it will continue to rise until we rouse ourselves at last. If we ever do.

The choice is simple: Defend ourselves or die. And many paid the price of that choice last weekend in Paris. En garde! Or be blown away -- literally.