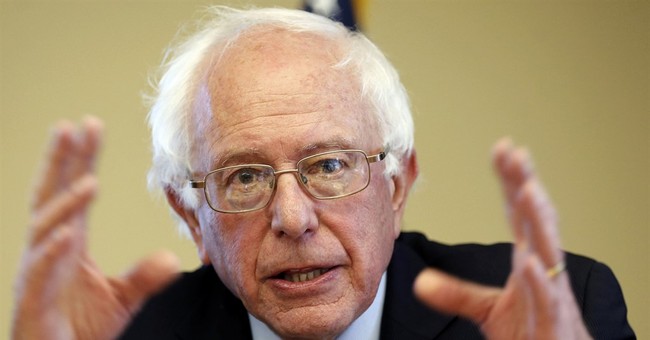 Bernie Sanders has been the congressman from little Vermont (a state so small it has only one) since 1990 and one of its senators since 2006. And as columnist George Will notes, in all that time he's been indistinguishable from his Democratic colleagues. For he "caucuses with the Democrats. He gets his committee assignments from the Democrats, and he's seeking the (presidential) nomination, of guess what, the Democratic Party." What a surprise.

Yet he proudly describes himself as a socialist -- and an independent, too. (He's got a lot or irons in the ideological fire.) But if a politician acts like a Democrat, talks like a Democrat and votes like a Democrat, then he might as well be one. No matter what he chooses to call himself, which is his prerogative in a free country.

Sen. Sanders sounds much concerned about the shrinking middle class in this country. Even if a classic socialist in the European mold would have little but contempt for the mores of the middle class -- the bourgeoisie. They were the respectable burghers of the Old World, the townsfolk with all their pretensions and aspirations and social mobility rather than the age-old stability of the nobles or peasants. A traditional socialist would instead identify with the "working class," the proletariat, the peasantry.

All the presidential contenders in the recent Democratic debate seemed in favor of free enterprise, small business and more opportunity for all. The only marked difference between them and Sen. Sanders seemed to be that he was more animated, as befits someone with more of a background -- and talent -- as an agitator. If he has the fervor and style of a socialist orator, Sen. Sanders' actual policies seem as respectable as any other bourgeois Democrat's. The Bronx used to have one on any street corner.

But the debate's moderator, Anderson Cooper, insisted on playing word games. He asked Hillary Clinton: "Just for the record, are you a progressive, or are you a moderate?" How about moderately progressive? "I'm a progressive," responded Miss Hillary, "who likes to get things done." As opposed to a moderate who doesn't?

The rest of her answer was equally smooth, and equally meaningless, but the audience seemed to appreciate her Clintonesque way with words, more slick than meaningful. Which is why, though she may please her partisan audience, Mrs./Sen./Secretary Clinton bores everybody else as she goes through her all-too-familiar routine. It's as if she were programmed to sound moderate whatever position she takes. It gets bo-ring.

In the end, as her voice begins to sound more and more like a screech, folks may just want to turn her off for a while. Although the rumor that she's an automated robot seems to have no basis in fact. Her most popular response during the entire course of the debate was also her shortest, consisting of just one word. Asked if she would like to respond to some comment from the colorless Lincoln Chafee, she answered: "No." And brought the house down. Out of sheer relief, no doubt.

Her presidential campaign -- and her administration if she wins it -- promises to be one long exercise in ennui. Which is another reason that labels like socialist matter less in this coming presidential election than which candidate can offer something different, thoughtful, substantial -- not just the usual polspeak. Hillary Clinton can't -- or at least she hasn't -- shown she can. Hillary is still Hillary, more's the pity.

When these presidential candidates mention the plight of the middle class in this country, they all seem to be referring only to an income bracket, not a state of mind with its own distinctive cultural and religious beliefs and values. Beliefs and values that don't seem to have changed all that much since the Puritans brought them to these shores in the 17th century -- from the work ethic to a sophisticated theology that has proven a remarkably durable part of the American ethos. And the very basis of American middle-class life, with its emphasis on saving, self-reliance, delayed gratification, church attendance, the work ethic ... and all the other traits of a middle-class mentality.

What is perceived as the decline of the middle class in this country may have a lot more to do with the decline of family, church, and community in American life than "income inequality," the rights of the LGBT "community," Climate Change and the other shibboleths of current identity politics. That decline began sometime in the last century in step with the rise of out-of-wedlock births. Just as Daniel Patrick Moynihan foresaw it would when he was still an aide in the Nixon administration. But when he dared to say so, he was shunned by respectable liberal opinion.

Yet candidates like Bernie Sanders and Hillary Clinton seem to think they've said something when they repeat empty phrases. What's needed in this coming campaign is not more labels but more thought.