The Middle East Moves to Europe 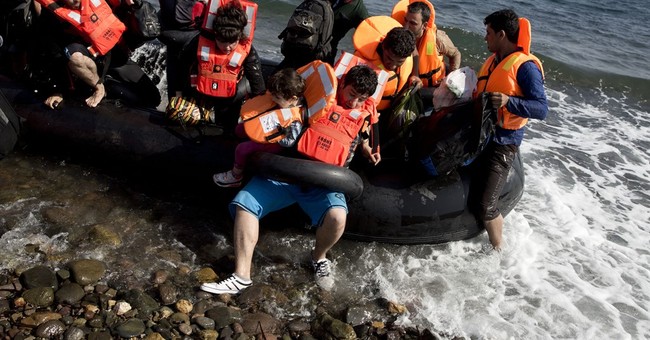 Not since the aftermath of the Second World War, or maybe the First, have so many sought refuge throughout Europe -- and beyond. The sight and sound of them, the sorrow and pathos they arouse, should be familiar enough by now. Every great war this century has produced similar scenes: This time there was the mob that refused to leave a railroad station in Hungary till they could be assured of passage West. Only to have their places taken by the next wave of desperate refugees. There was the lifeless body of a little boy being carried out of the waves after his overloaded little boat capsized. And always there are the distinguished statesmen who express sorrow in official communiques and may even call for action of some vague and unavailing kind....

But what's needed more than sentiment is a system to deal with the human tragedy unfolding all over Europe. And someone capable of setting up such a system, and then running it. It's not an impossible dream. In the past leaders have emerged who could deal with this kind of challenge, not just stand there wringing their hands while they explain that it's a great pity, but there's really nothing to be done.

When the First World War broke out in 1914, it would be called the Great War, for who could foresee that an even greater war would come along a couple of decades later? That's when an American mining engineer named Herbert Hoover who'd made a fortune in the Far East got an urgent call from the U.S. ambassador in London, Walter Hines Page, asking for his help. Belgium was being overrun, Americans were trapped overseas between the combatants, and refugees were everywhere.

Within 24 hours, Hoover and nine friends, all fellow engineers, assembled 500 volunteers and turned the grand ballroom of the old Savoy Hotel into a vast canteen and food-distribution center. ("I did not realize it at the moment," he would recall later, "but on August 3, 1914, my engineering career was over forever. I was on the slippery road of public life.")

Hoover took on the job of Europe's unofficial commissioner of refugees with two conditions: (1) He would not be paid. (2) He would be given complete control over what would become the Commission for the Relief of Belgium, which became a separate government of its own -- with its own flag, navy, factories, mills and rail lines -- and an annual budget in the millions, supplied by both governments and private contributions.

Hoover's refugee commission would save millions of lives, and find homes for millions more. He would buy food from all over the world -- rice in Burma, corn in Argentina, wheat and meat in this country -- and see that it got to where it was most needed in battle-torn Europe. He himself would become an international hero, the embodiment of the American can-do spirit. That same Ambassador Page would describe him later as "a simple, modest, energetic little man who began his career in California and will end it in heaven."

When another refugee crisis arose after the Second World War in the 1940s, the story didn't have the same happy ending. This time those floating around Europe would be called Displaced Persons and meet a variety of fates, there being no centralized system to deal with them all. Some found their way to safety somehow -- in this country, in the nascent state of Israel, even somewhere in Europe itself.

Other millions were sacrificed to political expediency and the vengeful wishes of dictators like Stalin, who wanted all those who'd escaped his grasp during the war returned to Russia. And many were. To encounter a dire fate -- from execution to slave labor camps.

Then there were the Jews, Poles, Ukrainians, Czechs, Estonians, Lithuanians, Latvians, Croats, Slovenes, Serbs ... captive peoples of all kinds who resisted being returned to their native lands and the Communist regimes that now controlled them. The result was that even by the 1950s there were still almost a million people languishing in European camps, and no Herbert Hoover in sight -- just when one was most needed. Just as someone with his talent for organization and administration, and insistence on independence, is needed once again to cut through all the excuses and treat these refugees now flooding Europe like human beings. Instead of human flotsam.

Lest we forget: Behind the headlines about Europe Swamped by Migrants, there are real people, each unique, each with his or her own life to lead and story to tell, each made in His image.