The Arrogance of Powerlessness 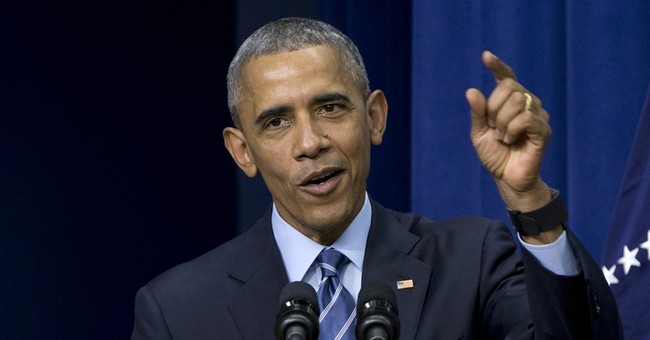 To hear our president tell it, the nuclear deal with Iran that he's pushing so assiduously is a great bargain. It guarantees security for all concerned and, to use an all too familiar phrase, peace in our time:

"The agreement now reached between the international community and the Islamic Republic of Iran builds on (a) tradition of strong, principled diplomacy. After two years of negotiations, we have achieved a detailed arrangement that permanently prohibits Iran from obtaining a nuclear weapon. It cuts off all of Iran's pathways to a bomb. It contains the most comprehensive inspection and verification regime ever negotiated to monitor a nuclear program. ... (I)t achieves one of our most critical security objectives. As such, it is a very good deal."

If all this sounds too good to be true, that may be because it is. It also sounds familiar, for we've heard the president carry on in this same triumphant mood before. Only the triumph never seems to materialize. His words about Iran now echo his old, blithe confidence that our enemies will keep their word and our remaining friends in the Middle East will be protected. As for his critics, he treats those with his usual mix of condescension and contempt.

Let's see, on what other occasions have Americans heard the same happy assurances that we now live in the best of all possible worlds in which this president's utopian vision of peace and security is about to be fulfilled? Let's run down the list, however incomplete:

Only four years ago, in 2011, the president was also hoping for the best when his administration helped overthrow Libya's ruthless dictator Muammar Gadhafi: "We will continue to insist that the basic rights of the Libyan people are respected. And we will continue to work with our allies and partners in the international community to protect the people of Libya, and to support a peaceful transition to democracy." By July of the following year, he was declaring victory: "We will engage as partners as the Libyan people work to build open and transparent institutions, establish security and the rule of law, advance opportunity, and promote unity and national reconciliation."

In fact Libya was already falling apart. It was undergoing not a peaceful transition to democracy but a violent collapse into the kind of anarchy long familiar throughout the Middle East -- as the bloody debacle at Benghazi would soon confirm. The best ambassador we had, Chris Stevens, was killed there along with three other Americans, and Libya remains in turmoil. Or worse, for a new and homicidal player -- ISIS, or the Islamic State -- has now entered the chaotic picture to wreak havoc.

Tell us another one, Mr. President, as you doubtless will.

As for the fabled Arab Spring, it turned to bleak Arab Winter some time ago, despite this president's happy talk: "For six months, we have witnessed an extraordinary change taking place in the Middle East and North Africa. Square by square, town by town, country by country, the people have risen up to demand their basic human rights. ... The events of the past six months show us that strategies of repression and strategies of diversion will not work anymore. Satellite television and the Internet provide a window into the wider world -- a world of astonishing progress. ... Through the moral force of nonviolence, the people of the region have achieved more change in six months than terrorists have accomplished in decades." Uh huh. And by now are mired in the same old defeated hopes and resurgent tyrannies that abound in that part of the world.

Welcome to the Middle East, Mr. President, where illusions come and go like any other mirage in the desert.

In Iraq, American boots are once again on the ground four years after this president declared the long war there was over and withdrew American forces: "Just as Iraqis have persevered through war, I'm confident that they can build a future worthy of their history as a cradle of civilization. ... So to sum up, the United States is moving forward from a position of strength."

By now it is clear that this administration was already moving backward from its usual position of weakness (leading from behind, it was called) even as the president was speaking. Stay tuned for more chaos to come.

As for Syria, its never-ceasing civil war continues to send ripples and refugees throughout the Middle East -- even though our president warned its dictator not to cross his red line by continuing to use chemical weapons against his own people. Of course Bashar al-Assad did (after a lot of back-and-forthing, Russian mediation and so ineffectually on). And of course our hapless president and commander-in-chief never enforced his red line, which soon faded to pink and then disappeared entirely.

Meanwhile, Syria and environs grow more chaotic every day. Even with a scorecard, you can't tell the players these days. Turkey? ISIS? NATO? Who knows? The dust storm our president stirred up continues to cover all.

Max Boot of the Council on Foreign Relations had an article in the Weekly Standard a few days ago ("Consistently Wrong") that attempted to review all the president's non-accomplishments in that part of the world -- Libya, Iraq, Syria, you name it -- and concluded:

"It is worth keeping all of this in mind when assessing Obama's airy assurances about Iran and the wonderful future he foresees for the Middle East after the implementation of his nuclear deal. The president may be right that things will work out as well as he envisions, but if so, that will be a first."