Notes On The News 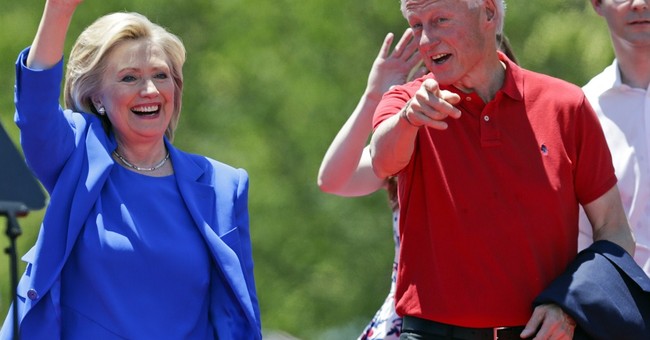 There he goes again: According to Bill Clinton in an interview with Bloomberg TV, all that criticism of his and Mrs. Clinton's interlocking foundations, aka Clinton Cash, is just a lot of partisan politics because she's running for president.

But on the same day, he told another audience (at an event associated with their foundations), that he would probably stop accepting payment for his speeches if Clinton femme were elected president.

Let's get this straight, or rather crooked: Conflicts of interest are all right if your wife is only secretary of state and various foreign governments and corporations are eager to give her foundation(s) huge donations -- and her husband huge payments for just making a speech. But if she becomes president, you'll probably forgo all those speaking fees. Why? A fit of conscience? A politic decision? Or just a whim? Who knows?

It all fits into the same pattern, that is, no logical pattern at all. Earlier this year, the former president said he would go right on collecting those bountiful speaking fees while his wife ran for president. ("I gotta pay our bills.") Now he says he may stop taking the money if she's elected. What's the ethical difference, if any?

Beats me, as the way Bill Clinton handles ethical questions always did. But it does have one thing in common with the peace of God. It "surpasseth all understanding."

Call him Mr. Justice Obama: Not satisfied with being just president, Barack Obama is playing Supreme Court justice again. He's prejudging the case against Obamacare (King v. Burwell) that the court -- not the president -- is supposed to decide this term. "This should be an easy case," claims President/Justice Obama. Really? Easy cases don't make it to the Supreme Court of the United States, only tough ones.

But the president sees no problem with his Signature Achievement and continuing source of controversy and embarrassment. And if there is a problem, he says Congress could solve it by passing a one-sentence change in the law. Which would make it clear that the law doesn't mean what it says in plain English.

Did I mention that Mr. Obama is a lawyer? And not only a lawyer but a professor of law. Which may be what it takes to so ignore the plain meaning of words, not to mention the separation of powers in our constitutional system.

Maybe the president is right about this case. Or maybe he's wrong. But some of us we would prefer to leave that judgment to, yes, the judges. Which is more than Barack Obama seems able to do.

His moment in the sun, or rather in the New York Post: There is a mysterious cycle in human events. To some newspapermen much is given. Of others much is expected. This one was destined to write five words that would forever be remembered in the art and annals of writing headlines:

The Artificial Black Woman: There's no telling by now many schools and libraries have banned Flannery O'Connor's classic short story "The Artificial N-----" from their reading lists -- many of them, one suspects, without reading any of it beyond its perfectly provocative, politically incorrect title. The mention of the once unmentionable N-word in the title was enough to alert our ever-vigilant Thought Police and get it banned all around the country.

Never mind that the title character of the story is inanimate -- one of those lawn jockeys that used to be found in front yards and country estates -- but not even whitewashing their faces was enough to make them socially acceptable in this effete era. On the contrary, it made them stand out even more, like a confession that their original color had to be hidden.

But now, in these supposedly post-racial times, the president of an NAACP chapter in Spokane, Wash., has been outed; she's accused of trying to pass as black, even though her birth certificate says white. Once again things have come full circle. And a largely artificial social construct -- race -- has been confused with an immutable biological fact. Why not just let the lady choose whatever racial identity she prefers? The Hon. Barack Obama did. Or would that be an unspeakably simple solution to this whole, drummed-up controversy?

Even better, why ask questions about race at all? As if somebody's "race" were anybody's business but his own. Granted, the collection of racial statistics may have some use in, say, determining how segregated or integrated or neither our schools or neighborhoods may be, but its usefulness diminishes daily as more and more school districts get out from under a court's jurisdiction and concentrate on educating their students regardless of race, color or ethnicity.

Enough. Could we please stop this verbal merry-round long enough for some of us to get off? We're getting dizzy.