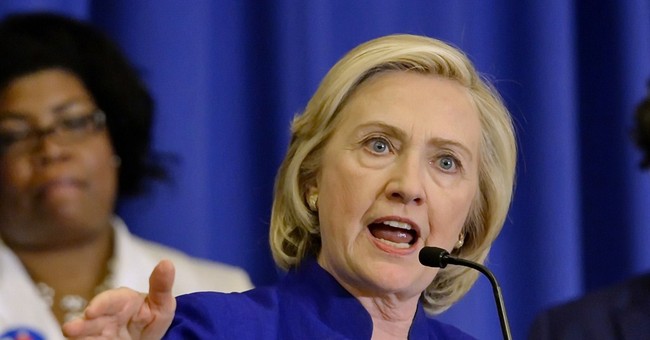 LITTLE ROCK -- Is it the first sign of desperation or just force of habit on her part? Or maybe even clever strategy, however unprincipled or untruthful. For whatever reason, Hillary Rodham Clinton has decided to accuse a slew of Republican governors and presidential candidates of "systematically and deliberately" trying to deny millions of Americans, mainly the poor and black, of their right to vote.

Now some of her Republican rivals, unimaginative but ever-hopeful types that they are, have begun to fight back by reciting the facts, little as those may matter to Ms., Mrs., Sen., Secretary, First Lady, Presidential Candidate Clinton, or whichever title she's going by at the moment. (What she needs is a single noun of address that will identify her simply and accurately. We nominate Demagogue Clinton.) By whatever title, Clinton femme has drawn some fire this time. One of the Republican leaders fighting back is New Joisey's Chris Christie, who's never been one to suffer fools and, even less, false accusations. As demonstrated by his recent vindication after being accused of creating a traffic jam on the George Washington Bridge for political purposes. Hillary Clinton, he says, doesn't know "the first thing about voting rights in New Jersey." As if that would matter to an old pol in the habit of making up her own. Who needs facts when she's got cover stories by the bushel? Always has had.

Ohio's widely respected John Kasich didn't take her accusation lying down, either, pointing out that his state still provides 28 days of early voting for all, while Hillary Clinton's current home state of New York provides exactly none. Did we say Hillary Rodham Clinton? Her middle name ought to be Hypocrisy.

Back when Barack Obama was throwing around much the same accusations of Voter Suppression against his Republican opponents, he was able to get away with it easier, maybe because of his protective coloration, maybe because it was still a relatively new smear when he was running for president.

This is not to say some voters weren't being intimidated eight years ago, but in at least one case, that of the New Black Panthers, they were black voters that the Obama machine -- in true Chicago fashion -- didn't really mind suppressing. (The last we heard, the administration was dismissing any charges in that now forgotten case. A lower-down in the Justice Department resigned in protest, but that was the end of it.)

There seems to be more than enough hypocrisy to go around when accusations of Voter Suppression are made. And it may take years for the facts to catch up with them.

But facts have little to do with smears like the one Hillary Clinton is spreading -- systematically and deliberately. She's just out to stir up old fears and dark memories among her political base, fears and memories that go back generations to the sad era of Jim Crow and Orval Faubus, of black sharecroppers being carted off to the polls by the truckload under the direction of bagmen working to re-elect Democratic stalwarts like Arkansas' John McClellan and J. William Fulbright, he of the infamous Southern Manifesto.

Now it's supposed to be Republican governors who are stirring up racial animosities for political fun and profit. Spare us. By now there have been more variations on this old theme than on any piece by Paganini. The whole business grows tiresome. But not to Hillary Clinton, who's just doing one more encore, like an aging actress doing one more farewell tour.

The tactic might even work come 2016, considering the ignorance and gullibility of a whole new generation of voters. There's nothing like a new audience of suckers to energize an old politician, however many scandals she's survived in a long and splotchy career made up of them.

Hillary Clinton's machinations go back to her days here in Arkansas when she was making a modest $100,000 return on a $1,000 investment in commodity trades (cattle futures, wasn't it?) all the way up to Clinton, Inc. -- her current empire-sized, family-run, and highly suspect network of international foundations.

The ostensible purpose of all those interwoven foundations is to do good in the world, and there's little doubt it has, at least for all the various Clintons and their connections. Charity begins at home, they say, and Hillary Clinton can testify to that. And the money keeps rolling in. Clinton and Co. Unlimited isn't picky. It seems to accept donations, the huger the better, from every foreign government and corporation with a stake in buying a little influence, or maybe a lot, with our State Department and/or a future president of the United States.

But what does a little matter of ethics matter to the kind of voters Hillary Clinton can scare into believing that those big, bad old Republicans are out to suppress their votes? It doesn't matter at all, not so long as their racial/ethnic/class prejudices are kept fresh by a demagogue, in this case one running for president again. If and when she does move into the White House again, her home away from home, the taxpayers may have to build an annex to hold all the political baggage she'll be carrying with her.

Hillary Clinton, Esq., wouldn't be our first tainted president; Richard Nixon comes immediately to mind. There was always a New Nixon -- the old leopard was always claiming to have changed his spots -- whenever he revived his presidential hopes. But there never seems to be a New Hillary, just the same old one with the same old tricks. And this business about Voter Suppression is one of her older and more transparent ones. It's an act that needs to be retired; instead, it keeps getting revived.

Hillary Clinton may not know much about voter suppression, but she's an expert at being a repetitive, world-class bore who has nothing new to say, and keeps on saying it.