Tempest in a Censer 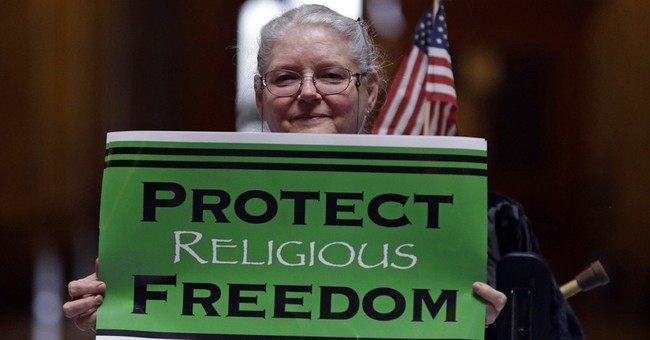 Religious wars have been a recurrent, even defining, aspect of Europe's history. Why have there been none on these shores despite the best efforts of demagogues to stir one up? Indeed, the very idea of a religious war in this country has something more than faintly ridiculous about it. To use a phrase vaguely attributed to Mark Twain, "It's not American, it's not un-American, it's French."

Can it be because in Europe church and state might be part of the same established religious-political order? So that Her Britannic Majesty the queen of England is also supreme governor of the Church of England, while in France a satirical weekly like Charlie Hebdo treats all religions with equal contempt. America is different; no one religion is established -- that would be against the Constitution, the same one that guarantees the free exercise of religion.

Here laws against purely religious offenses like blasphemy have long since faded, and all religions tend to be respected equally: yours, mine or the other fellow's. Here it is generally assumed that religion is a good thing. So good that everybody ought to have one. Why does the United States remain the most religious of Western industrialized societies, at least if you go by the polls that show Americans attending religious services regularly while Europeans seldom do? The less pressure to be religious, it seems, the more religious Americans tend to be.

It's a paradox that caught the notice of a French nobleman who visited this country in the 1830s, and wound up writing what is still the most insightful study of Democracy in America extant. As he put it in that classic work:

"On my arrival in the United States the religious aspect of the country was the first thing that struck my attention; and the longer I stayed there, the more I perceived the great political consequences resulting from this new state of things. In France I had almost always seen the spirit of religion and the spirit of freedom marching in opposite directions. But in America I found they were intimately united and that they reigned in common over the same country.

"My desire to discover the causes of this phenomenon increased from day to day. In order to satisfy it I questioned the members of all the different sects. ... To each of these men I expressed my astonishment and explained my doubts. I found that they differed upon matters of detail alone, and that they all attributed the peaceful dominion of religion in their country mainly to the separation of church and state. I do not hesitate to affirm that during my stay in America I did not meet a single individual, of the clergy or the laity, who was not of the same opinion on this point."

This happy state of affairs in which religious liberty is not opposed to every other kind but allied with it is not the result solely of the Founders' foresight. Despite all Americans' almost worshipful respect for the Constitution, this sensible accommodation of (a) individual conscience and (b) the public interest in having all obey the same laws was worked out gradually over the years on a case-by-case basis. In the best tradition of a practical, conservative approach to thorny questions. See what works and what doesn't before adopting it. Be guided by experience, not theory.

The conservative approach is more an attitude, a temperament, an inclination than some hard-and-fast set of principles imposed now and forever. At least the best, more enduring kind of conservatism is. It demands patience. In contrast, knee-jerk liberals tend to go into hysterics when some passing development in the news offends their too-tender sensibilities.

Think I exaggerate? Consider the panicky reaction from Hillary Clinton when she heard about Indiana's law protecting the individual citizen's right to follow his religious conscience and, for example, not participate in a homosexual wedding ceremony. Indiana's law is not much different from the one Arkansas just adopted after its governor, Asa Hutchinson, refined its wording to make sure it comported with federal law. But none of that kept Ms. Clinton from flying into a twitter: "Sad that new Indiana law can happen in America today. We shouldn't discriminate against (people because) of who they love."

Ms. Clinton was scarcely alone out there on the left's hysterical fringe. Al Sharpton was heard from (of course) comparing the new law in Indiana as nothing but a return to the Jim Crow era. The ironies here not only abound but go beyond irony into the ridiculous. It was Ms. Clinton's husband who signed the first of these Religious Freedom Restoration acts on the federal level. And now governors of the very states that had adopted such laws years ago were heard saying they were an awful threat to our civil liberties -- as if freedom of religion were not a civil liberty itself.

M. de Tocqueville would doubtless by mystified by all this commotion. In a country where even atheists are free to found their own religion, why bother protesting against any of them? Just found your own. One of Flannery O'Connor's characters invented a Church of Jesus Christ without Jesus Christ, which was his every right in this still free country.

Let freedom ring! Why invent conflicts between religion and state in a country where anybody is free to invent his own faith? Just live and let live.