Of the Living, the Dead and the Fictional 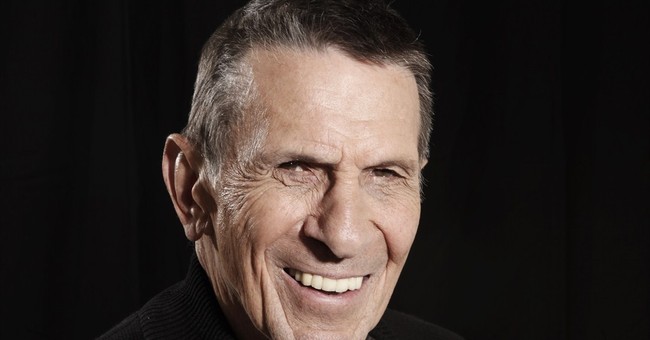 Leonard Nimoy has died at 83. And here I'd thought pointy-eared Vulcans, even one who was half earthling, lived much longer. For he had long been identified with his alter ego -- Star Trek's cool, hyper-rational Mr. Spock, perhaps the most fascinating if not the only fascinating character in the colorless crew of the starship Enterprise, a generalization that definitely includes its deadly dull Captain Kirk.

William Shatner/Captain Kirk was born to make TV commercials for banks, credit cards and such, not drama. Mr. Spock was different, a mine of cool observations about the human condition, though there were some aspects of it that remained a mystery to him. ("I've never understood the female capacity to avoid a direct answer to any question.")

Leonard Nimoy was of two minds, at least, about his other self, Mr. Spock, as reflected in the titles of his two autobiographies, "I Am Not Spock" (1975), and "I Am Spock" (1995). In the end he seemed to reconcile himself to being and not being Mr. Spock.

Not all of us have an easy time accepting our identity, let alone two of them. "To this day," Mr. Nimoy confessed years after the "Star Trek" series had ended, "I sense Vulcan speech patterns, Vulcan social attitudes and even Vulcan patterns of logic and emotional suppression in my behavior." Still, he added, "Given the choice, if I had to be someone else, I would be Spock."

He is survived by, among others, Mr. Spock, who still lives in syndication, the closest television actors may come to eternity.

Then there are the adventures of the fictional that turn into real-life parody, as when the ever humorless New York Times reported why a happy couple were drawn to each other: "Their relationship was based on a shared passion for a low-carbon energy future."

It was clearly a match made in eco-heaven. The couple in (considerable) question? Oregon's now former governor, John Kitzhaber, and his fiancée Cylvia Hayes, environmentalist and lobbyist, not necessarily in that order. As a result of the scandal that now has engulfed both, the governor is no longer governor and Ms. Hayes is no longer an environmental "consultant." She is now under investigation by both federal and state authorities, accused of using her influence with the governor to advance her own interests.

Ms. Hayes' record abounds with dubious deals. For example, after accepting $25,000 in "consulting fees" from a leftish group called Demos, she promptly began holding receptions at the Governor's Mansion to promote one of its favorite ideas -- the Genuine Progress Indicator as an alternative to the staid old measurement known as the Gross Domestic Product. (The idea was borrowed from that center of Progressive thought, the Kingdom of Bhutan.)

She also accepted a six-figure "fellowship" from another leftist lobby in exchange for unspecified services, whereupon the group's leader was named the governor's highest-paid aide.

Somewhere along the way Cylvia Hayes also took a few thousand bucks to act as the bride in a proxy wedding to an Ethiopian who was interested in becoming a permanent U.S. resident. Oh, yes, she also got involved in an illegal marijuana-raising scheme.

Let's just say none of this looked good for the governor or his inamorata. I'm not sure whether their love story now seems more sordid or comic, but it would make a great television series. If it hadn't already been made -- and aired to rave reviews.

It was called "Portlandia."