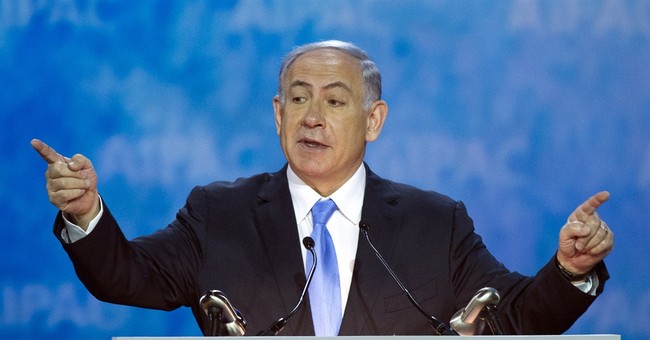 It is not often that a ghostly figure from the past is not only embodied in a present-day politician but addresses the Congress of the United States -- which is what Israel's embattled prime minister, Benjamin Netanyahu, did last Tuesday.

The prime minister could have been Banquo's ghost out of "Macbeth" summoned to haunt this administration's festive rapprochement with Iran. Instead, he brought to mind Edvard Benes, the leader of the Czechoslovakian government that would be sold out at the Munich Conference of 1938. Ever since, Munich has been not just the name of a German city but the symbol of appeasement and the bitter fruit it regularly bears -- war and chaos. And is about to bear again.

Washington's foreign policy establishment now prepares to further ease its trade sanctions on Iran and celebrate a deal that would give Teheran's mullahs the chance to develop a nuclear weapon all their own, an opportunity they long have sought, and now appear on the verge of achieving.

In this remake of the Munich tragedy, Benes' warnings about the threat Nazi Germany posed in 1938 can be applied to Teheran's little fuehrers, and some of the Israeli prime minister's lines last week sounded just as prophetic:

--"Iran's regime poses a great threat not only to Israel but also to the peace of the entire world."

--"Would Iran be less aggressive when (American) sanctions are removed and its economy is stronger? Why should Iran's radical regime as a terror sponsor change for the better when it can enjoy the best of both worlds: aggression abroad, prosperity at home?"

--"I don't believe that Iran's radical regime will change for the better after this deal."

Not any more than Herr Hitler's did after Munich. On the contrary, he was emboldened. Just as today Iran's rulers are being encouraged by one concession after another.

The world has seen this tragedy before, though the cast may change from time to time. Neville Chamberlain is being played this year by Barack Obama, but the outcome may be no more propitious.

Yes, some in Congress can see all too clearly the tragedy now in progress. Just as a quixotic backbencher in the House of Commons in 1938 named Winston Churchill declined to join the widespread jubilation that greeted the signing of the Munich Agreement back in those heady days.

He could see that Mr. Chamberlain's vaunted Peace in Our Time would prove anything but. And the war came. The most terrible of wars in man's history. It's hard to see how throwing nuclear weapons into this witches' brew of negotiation, appeasement and general procrastination will improve anything this time around. This repeat performance of the Follies of 1938 could come to an even sorrier end. And soon.

Winston Churchill's voice in the wilderness back in 1938 summed up what had happened at Munich in words that should still ring:

"I do not grudge our loyal, brave people, who were ready to do their duty no matter what the cost, who never flinched under the strain. ... I do not grudge them the natural, spontaneous outburst of joy and relief when they learned that the hard ordeal would no longer be required of them at the moment; but they should know the truth. They should know that we have passed an awful milestone in our history, when the whole equilibrium of Europe has been deranged, and that the terrible words have for the time being been pronounced against the Western democracies: 'Thou art weighed in the balance and found wanting.'

"And do not suppose that this is the end. This is only the beginning of the reckoning. This is only the first sip, the first foretaste of a bitter cup which will be proffered to us year by year unless by a supreme recovery of moral health and martial vigor, we arise again and take our stand for freedom as in the olden time."

In the end, the British race did just that in what would become its Finest Hour as it stood alone against the tyrant till the rest of the world awakened.

But why wait till desperate circumstances oblige the American people to rediscover our character and rise again to the occasion? Why not reject Munich II and make this the moment America awoke? While there is still time to rise again and take our stand for freedom as in the olden time.