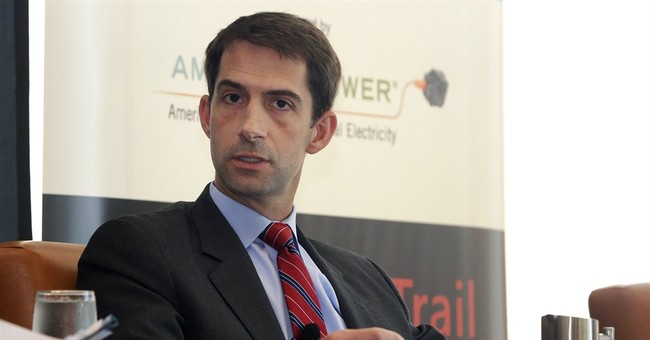 Tom Cotton, the still new U.S. senator from Arkansas, combat veteran of the wars in Iraq and Afghanistan, native of Yell County (just like "True Grit's" Mattie Ross), graduate of Dardanelle High and Harvard University (both undergraduate and law school), he's always told it with the bark off. And he did not disappoint while grilling one of our president's policymakers last week before the Senate Armed Services Committee, which is much in need of unvarnished comments like those of Captain and Senator Cotton. So is the country, which may explain why his comments promptly made the junior senator a Twitter star for a fleeting news cycle.

Just what did Tom Cotton say that made him the sensation of the day, or at least hour, on our ever fickle social media?

It happened when Brian McKeon, now deputy undersecretary for policy in the Obama defense department after years as a Democratic apparatchik in Washington, was pushing that tired old line about the need to close the brig at Guantanamo. Why, for goodness and safety's sake? Because, said Mr. McKeon, the enemy was using lurid tales about Gitmo to recruit new fanatics to its unholy cause.

Mr. McKeon's glib rationale is only one illustration of this administration's carelessness when it comes to dealing with some of the most dangerous menaces to the civilized world. Can anyone seriously believe that, if Gitmo were shut down tomorrow, these terrorists would not come up with some other excuse to attack us, not to mention behead the innocent and terrorize one country after another? But this administration is just that gullible -- and keeps proving it.
CARTOONS | Tom Stiglich
View Cartoon

For a time, the president and his fast-and-furious attorney general were ready to shut down a large part of Lower Manhattan in order to give these unlawful combatants a civil trial instead of keeping them where they belong: under military jurisdiction. That plan would have given our enemies the satisfaction of stifling commerce, traffic and life in general in a large part of New York City -- again.

Happily, wiser heads, like New York's mayor and alert members of Congress, put the kibosh on the administration's brilliant idea. But the masterminds in the White House are still trying to close down the one ideal place to hold these clear and present dangers to us all.

Tom Cotton wasn't swallowing any of this guff about some urgent need to close Gitmo and find some other way to detain its current guests -- or just to let them go. Sen. Cotton's response was concise and to the point: "In my opinion, the only problem with Guantanamo Bay is there are too many empty beds and cells there right now. We should be sending more terrorists there for further interrogation to keep this country safe. As far as I'm concerned, every last one of them can rot in hell. But as long as they can't do that, they can rot in Guantanamo Bay."

The facilities in the Nether Regions may be fully booked these days, as always, and not as comfortable as those at Gitmo, but until lodging there is available, beautiful Guantanamo Bay will do just fine for these murderous types for now. And for as long as it takes for the last killer there to die of old age. Till then, they can rot there.

There was a time when this country recognized that unlawful combatants -- like Hitler's sadists or Tojo's torturers -- needed to be held at least for the duration of hostilities, if not promptly executed by order of a duly convened court-martial in accordance with established military law. Not to mention the Geneva Conventions, which recognize that unlawful combatants are not to be considered prisoners of war with all rights and privileges appertaining thereto, but outlaws -- and dealt with accordingly.

There are ample precedents for dealing with terrorists effectively. Consider the fate of those German saboteurs caught soon after they landed on Long Island and on a Florida beach shortly after this country entered the Second World War: They were sent to the electric chair by a special military commission, while those who turned the others in were imprisoned for the duration of the war.

When today's conflict with terrorism will end is still indefinite, and that's just the way Gitmo's prisoners should be held: indefinitely.

Let it be noted that our guests at Guantanamo are entitled to seek a writ of habeas corpus in the civil courts, if they can get one, and are fully eligible to be tried by military commission under the laws of war. But for now they're just where they belong.

Yet this administration keeps inventing reasons -- or rather excuses -- to free them. How many have been released by now only to return to the battlefield and kill more of our GIs? The last estimate we saw was a quarter to a third.

No wonder Senator and Captain sounds sick of this runaround. What is this -- some kind of catch-and-release game? It's not. It's a brutal war against a brutal enemy -- a matter of life and death, not public relations. So why fight the same enemy twice? Even if our military's commander-in-chief may be only too willing to put his troops' lives at risk. Not just once but twice.

As a matter of both law and morality, keeping these menaces locked up at Guantanamo is certainly preferable to the Hon. Barack Obama's most recent alternative to indefinite imprisonment for these killers: executing them summarily by drone strikes abroad. Better to keep them under lock and key at Gitmo, where they'd be available for questioning till the day they or this long, long war expire.

Tom Cotton, senator and Arkie, has it right: Let 'em rot there.