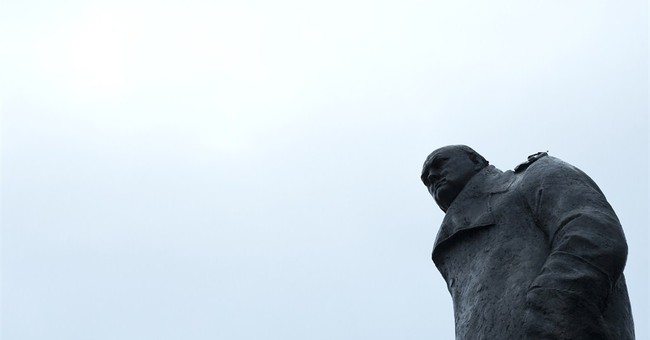 It's a slim little book that had a powerful impact as this country and the rest of the world hovered on the edge of war in 1939: "Mrs. Miniver" by Jan Struther, which began as a collection of short newspaper columns in the Times about the daily life of an English household in suburban London. Then it became a popular novel, and eventually a classic movie (Greer Garson, Walter Pidgeon).

The movie was soon recognized by both British and American leaders -- Franklin Roosevelt and Winston Churchill -- as an invaluable aid in mobilizing American opinion in favor of entering the war on the Allied side. With its scenes of daily domestic life, it allowed Americans to identify with a middle-class English family that, like all of Britain, would soon be in a battle for its survival. And it would have to fight alone till the rest of the world woke up.

On re-reading the book so many years later, what stands out are the ordinary words that are no longer ordinary, or even used today, certainly not with the same meaning. Consider this phrase Mrs. Miniver uses to describe her feeling when, on the way to a weekend in the country, she notices almost with a premonition what a fine spring it was that Year of Our Lord 1939: "It was being a lavishly lovely spring, almost frightening in its perfection, as though for some reason it was meant to be a final performance." She is surprised when, mentioning the thought to her husband, he replies: "But that's what I feel every spring."

Here they'd been married for some 17 years, Mrs. Miniver realizes, but she'd never known that about him before. Even after all this time, their marriage still has its small surprises. That detail had escaped her notice, she thinks, in the midst of "the devastating intimacy of a happy marriage." It's a happy phrase, but what strikes the eye, and the mind, is the use of the word intimacy in that context. For in our coarser time, intimacy has long since been reduced to a euphemism for only sexual relations. ("How long have you been intimate with the accused?" asked the prosecuting attorney.)

It's a little book, but it's full of phrases that can no longer be used in their once proper way. If we dare use them at all. Words like gay and adult are now so freighted with other meanings -- "Court Approves Gay Marriages," Adult Movies -- that we may hesitate before daring to employ them in the old, accepted sense. We lose more words that way, along with the more genteel world they were part of.

To lose any word is to lose a whole world, or at least worldview. Think of how long it's been since any political leader referred to posterity, as in the Preamble to the Constitution ("... and secure the Blessings of Liberty to ourselves and our Posterity.") It is a rare writer, like Flannery O'Connor, who could bring a word like posterity to life again, as when she said that "God and posterity are only served by well-made objects." Which ought to serve as every writer's credo.

Think of all the other good words that have been turned into bad ones by the current canons of political correctness -- like discrimination. To quote Daniel Hannan, a British member of the European Parliament, discrimination has come to mean only invidious, unjust discrimination -- "being unpleasant to women or black people. Literally, of course, discrimination simply means discernment. It is something we practice every time we decide between alternatives. But its political undertones have spilled over into every usage of the word, so that discrimination, in any context, becomes discreditable. A firm that discriminates in favor of properly qualified applicants, or a university that insists on good exam results, cannot wholly escape the sense that it is doing something shameful."

A perfectly good word like diversity has undergone the same degradation in our current newspeak, or as Mr. Hannan defines its current (mis)usage in the current issue of the New Criterion: "Diversity: People who look different but think the same way. Diversity applies to race, sex, disability and sexual orientation. It emphatically does not apply to opinion. Indeed, when it comes to political views, it has taken on more or less the opposite of its Oldspeak meaning."

The same fading-away of clear definition, like the world seen through blurry eyeglasses, can be spotted almost wherever you look in today's political commentary. Equality, a fine old word, has almost completely lost its old meaning of equality before the law or equality of opportunity, and has been reduced to only a material equality, as when our president says inequality has become the "defining issue of our time."

Or as George Orwell said in his glossary of Newspeak at the back of 1984, the object of that politically correct language is to restrict meaning, not expand it: "Newspeak was designed not to extend but to diminish the range of thought...." So that even the word free could be used in only the most limited sense. It still existed, but could be used only in statements like "The dog is free from lice," or "This field is free from weeds." It could no longer be used, Orwell wrote, "in its old sense of 'politically free' or 'intellectually free,' since political and intellectual freedom no longer existed even as concepts, and were therefore of necessity nameless."

Poor Mrs. Miniver would doubtless be appalled at the threadbare state of the English vocabulary today. We all should be.