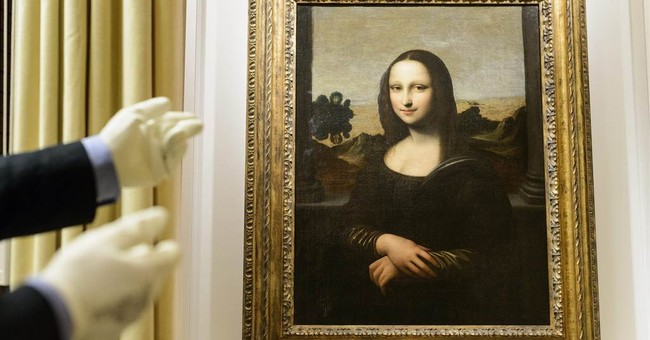 It's happened to all of us, surely, saying something stupid. And, worse, thinking it clever at the time, even conclusive, the perfect applause line. When it was really only flip, superficial, ignorant -- a throwaway line that should have been thrown away before it was uttered. In short, stupid.

Consider this comment from our president in the course of a well-orchestrated talk about education to a captive audience -- indeed, a carefully selected one. "I promise you," he told a stage full of supporting actors assembled for a union rally, "folks can make a lot more, potentially, with skilled manufacturing or the trades than they might with an art history degree."

Our philistine-in-chief, always the politician, then did the politic thing: backed up and said he actually loved art history -- and also didn't want to get a lot of angry emails from art historians. The crowd laughed on cue. The kind of laughter that could have been a sound track for a bad sit-com. The president had done his bit, the supporting cast its, and all seemed rather pleased with themselves. Cut.

Later, in response to just the kind of angry email the president had anticipated, the White House distributed his handwritten response to an art historian who'd complained about his ill-considered comment. Actually, he explained, his exposure to the history of art had helped him "take in a great deal of joy" in his life. Call his note the perfect coda to his original performance.

Except that a young art historian by the name of Joel Parsons, sculptor and director of the Clough-Hanson Gallery on the campus of Rhodes College in Memphis, wrote a detailed dissection of the president's presentation in the current Rhodes alumni magazine.

Mr. Parsons is an alumnus of that small liberal-arts school himself (Class of '07), and it shows. Only an artist's eye and a visually well-educated sensibility like his might have been able to produce a critical analysis, frame by frame, of a CNN video of the president's expertly produced remarks. As in this excerpt from his article:

"The camera cuts (to) President Obama, who stands in shirtsleeves, his tie slightly loosened. His undershirt is visible through his button-down under the intense light from what I assume is the work-day sun. Behind him is a crowd of men and women in more casual clothing, some wearing sweatshirts that have the name of a union printed across them. Their presence creates a spectrum of skin tones. Each person was clearly vetted for visual effect, as were the president's and the newscaster's costumes, the size of their flag lapel pins, the shape of the microphones they speak into, and the angle of the light on their faces...."

Joel Parsons' analysis is not only factually precise, but it goes beyond all the technical details involved in making this video to raise deeper questions about image and reality in American politics and life. Read it (in the Fall 2014 edition of Rhodes magazine), and you can hear not just an artist and historian thinking aloud, but a well-educated man -- the kind that liberal-arts colleges like Rhodes turn out with every graduating class. As in this passage from his article:

"Even when presented with a text, my research instincts are grounded in methodologies from art history 101, tools for visual analysis that I have employed frequently since the day I learned them in a first-year art history course here at Rhodes College. With a cursory visual analysis complete, I turn again to the quote ("I promise you, folks can make a lot more, potentially, with skilled manufacturing or the trades than they might with an art history degree"), which I can see now as a product of its attendant images as much as a producer of them. Will a skilled manufacturer or tradeswoman make a lot more money than a student of art history? Maybe. It's possible. Who can know for sure?

"The answer is far less interesting and vital than the follow-up questions that close-looking can produce. At whom is this message of economic self-sufficiency via vocational training being directed? What image of America is painted by this message and the setting in which it is delivered, and who has access to that America? (Another relevant question might be, does a person who becomes an arts professional for the money harbor a greater misunderstanding of art or money? But that's a question for another conversation.)

"Stepping outside of this exercise and these questions, what we can say, for certain, is that our culture creates and deploys images at an increasing, and increasingly overwhelming, rate. Paychecks aside, more and more we are finding that images are a kind of currency. And there is no field of study that better equips its students to process, unpack, dissect, navigate, analyze, deflate, create and otherwise make sense and use of images than the study of visual art. As the onslaught of images grows, a skilled manufacturer, an academic and a president will find that an eye honed in art history seminars and painting studios will serve her better every day.

"In his apology note, President Obama said that art history, which we may understand as the fruit of this process of close-looking and analysis, has helped him in his own life to 'take in a great deal of joy.' Replace joy with richness, understood in its broadest sense, and you'll find a sentiment with which a great many artists, skilled manufacturers, art historians, and tradeswomen can agree."

What a pleasure, and education, to read a fair, thoughtful piece like this in an alumni magazine instead of still another report on the new stadium on campus, or how many specialized vocational courses a "university" can now offer its students. Mr. Parsons' article is the best answer I've come across of late to the question, "What good is a liberal education?" Thank you, Joel Parsons. You've just showed us.

Surely one component of a good liberal education is art history, for art offers us not just an addition to life, a measure of fun and delight -- call it joy, lower-case -- but something more profound. The creation, and apprehension, of art must be one of the defining attributes of our species, perhaps its crowning distinction.

Art in that fuller, richer sense, capital-A Art, not only adds to our life but changes it, transforms it. For there is something imperative about great art. It not only concentrates a mind educated to be receptive to it, but quickens it, awakens it, inspires it, transforms it. Or as Rilke concluded his poem about viewing an archaic bust of Apollo: You must change your life.

Art approached that way, fully alive to it, isn't just beautiful but sublime, a distinction Edmund Burke made in one of his essays: "A Philosophical Enquiry into the Origin of Our Ideas of the Sublime and Beautiful," 1757. That essay is still worth reading and re-reading, as so many of Burke's are. You might still remember it from ... an art history class.