It's Always A Shock 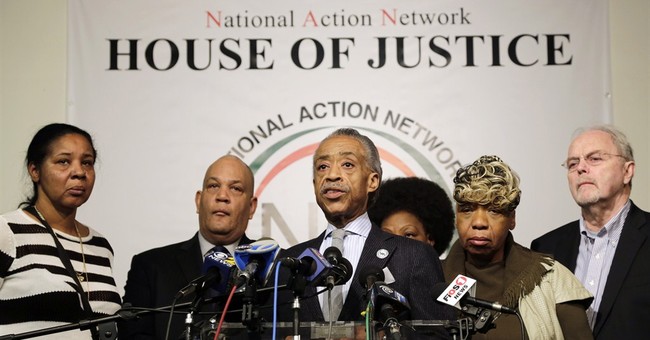 By now the cast of thousands all know their well-worn roles. And so does the national audience, which has seen this pageant performed again and again. The whole production has become as familiar as an old standard in the repertory of an opera company. Only the actors may change from time to time, though some seem to hang on forever, reciting the same old lines and practicing the same old demagoguery.

Only this isn't an opera. It's more of an outdoor drama re-enacted in different settings across the country -- from little Ferguson, Missouri, to metropolitan New York, and reported in detail on the evening news every night for a national audience. Before an ever-fickle public grows bored and moves on to the next Big Story.

Then, after an all too short interval, it's time for a repeat performance that'll be triggered by the next contentious, and often enough fatal, confrontation. Only the names of the dead seem to change; the plot never does. But this is no work of fiction. It's a matter of life and death, of law and anarchy, of low politics and high -- even hyped -- drama.

By now you know the libretto scene by scene, almost line by line. The opening never varies: A black man is killed by a white police officer. After that, it's lights, camera, action without pause until the last reel slowly unwinds with a fading whine and the familiar flap, flap, flap before the screen goes dark. Till the next showing.

There are no intermissions, no pauses, no distractions and detours to interfere with the plot. Why waste time on investigations, grand juries and their reports in boring detail, their indictments or absence of same, and the whole due, dreary process of law? It's too much bother.

Instead it's ... On with the Show! Fast-paced action and talking heads -- or rather shouting and orating heads -- talk past each other at length. Dialogue flows without end, full of pointless platitudes and endless repetitions, all talk and no listening. That's the ticket

All goes according to established form: First come the mourners and bouquets of flowers and pro-forma appeals for peaceful protests, which quickly morph into riots -- broken windows, littered streets, and looted stores. All the while local law enforcement hesitates to enforce the law. Lest it only add to the fury of the mob. Some even advocate ignoring the broken windows and all the other little offenses, at least till they grow into big ones. As they tend to do when ignored.

Eventually the violence abates, the calm after the storm begins to set in, everybody settles down, and there's plenty of time to file insurance claims before the next storm of protests sweeps the country and the familiar ritual is re-enacted. In the meantime, the verbal vacuum is filled with a lot of talk about lessons to be learned, though few if any ever are.

When the inevitable sequel comes along, the leading roles are reserved for the same old stars: the preacher-politicians, the lawheads practicing their trade before the television cameras instead of a judge and jury, the various celebrities and basso profondo commentators with voices deeper than any thoughts they might express. ... The Al Sharptons and Jesse Jacksons quickly materialize, along with the next generation of up-and-coming race hustlers eager to succeed them in the national spotlight.

Just as the small fry in this folk drama give way to the big guns, the small-time politicians -- the ward-heelers and aldermen -- step aside for the mayors, governors and even the president of the United States to take center stage. For all must say something (even if it's really nothing) before the public's attention wanders again. And so the big show grows bigger, augmented by ever bigger names.

Naturally the politicians take care to preface their remarks by paying a little lip service to law-and-order -- even if the essence of their remarks is not to wait for the law to take its orderly course, but to judge now. Before their audience drifts away to the next cause du jour.

Our president's statements were fairly typical of the whole genre when a black man named Eric Garner was caught violating a minor ordinance on Staten Island, and held in a chokehold/headlock by a white police officer until he collapsed. Sent to a local hospital, he would be dead on arrival there. And it would be time for the usual cacophony of reactions to start.

A grand jury declined to indict the officer involved, but that didn't stop the president from passing judgment on the police by connecting Eric Garner's death to "concern on the part of too many minority communities that law enforcement is not working with them and dealing with them in a fair way." He went on to add that, "when anybody in this country is not being treated equally under the law, that's a problem. And it's my job as president to try to solve it." Unless he's a police officer being convicted without the benefit of a trial? Or even an indictment by a grand jury?

The president proceeded to demonstrate that he can bear the difficulties of others lightly enough, or as he put it, "a country's conscience sometimes has to be triggered by some inconvenience." The blocked streets and backed-up traffic, the loss of business and income, the shrinking sense of security in public spaces, all the disruptions to the civic order that these mass protests engender ... they're all just an inconvenience -- so long as only others must put up with them. We forget what a fragile fabric society, and civilization itself, can be. And how easily it can be rent. So politicians who should know better rant on.

Respect for the rule of law tends to be waived when a political leader finds himself rushed to (mis)judgment by the clamoring voices of those frustrated by the slow pace at which the wheels of justice grind, and demanding vengeance. In a different time, when the accused was a different color, there was a name for this kind of hasty "justice" -- lynch law. But due process tends to be suspended when a politician's base is out marching in the streets and demanding that he say something. And he responds by saying too much.

It was all par for the sad course, and it all might have faded away as so many other once celebrated causes do, until there came ... the shock. The country awoke to the news that two police officers had been gunned down without warning as they sat quietly in their patrol car in Brooklyn. The messages the killer left behind made it clear that he had been intent on taking homicidal vengeance for Eric Garner's death -- on two innocent cops.

That's when New York's mayor, who had been encouraging the protesters for some time, changed his tune and called for a time-out on demonstrations. Even the president sounded newly appreciative of the police officers who risk their lives every day to protect the rest of us.

Both the mayor and the president sounded shocked -- shocked -- at discovering that ideas have consequences, however casually they'd expressed them. It was as if they hadn't realized before that words ought to be edited and weighed, their effect carefully calibrated, before they're uttered. Words can be as deadly as bullets, and should be handled with the same care, not just fired off for political effect.

The ambush killing of these two law officers on a Brooklyn street interrupted the whole, elaborate panorama of protest that had been proceeding according to script. Their murders shocked the nation, or should have. And maybe it'll take shock treatment to put an end to this familiar drama that has gone on for too long, repeat performance after repeat performance. And to let the rule of law return unhindered and unhurried. It's been missed.