The Dream of American Isolation 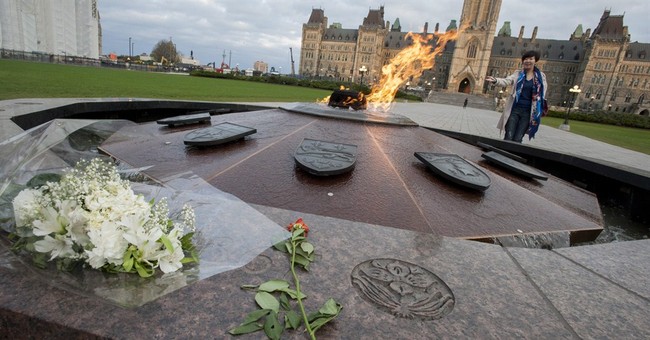 Call it the Case of the Not So Innocent Bystander, for how can anyone who witnesses evil but does nothing to stop it be called innocent? To quote an observation attributed to that great British statesman Edmund Burke: "The only thing necessary for the triumph of evil is that good men do nothing."

Even now the evil besetting the Middle East sends out ripples spread far and wide -- even to peaceful Ottawa, where a terrorist begins attacking Canadian soldiers and then Parliament itself. Until finally a sergeant-at-arms with good sense and a handy weapon lays down his ceremonial mace long enough to shoot the invader dead. The best response to evil is too often the last.

Not till enough of the innocent have paid the price may America finally wake up and act. "You can always count on Americans to do the right thing," an Englishman named Churchill once observed, "after they've tried everything else."

In the meantime, eloquent statesmen bemoan the times nothing was done to stop evil in the past -- without being able to stop it in the present. As if we'd learned nothing from all that suffering. The United Nations' envoy to Syria, or what's left of it by now, held a news conference the other day to call for action, some action, any action, to stop the unending bloodshed there. Which by now is seeping out of that vivisected country like an untreated infection.

In the course of his appeal for action, Staffan de Mistura recalled one massacre that took place under the UN's less than watchful eye, though he could have cited a number of them. "You remember Srebrenica?" he asked. How could anyone with a conscience not? Naturally, the UN's Kofi Annan was on the scene. To watch. And later make (unconvincing) excuses. And not for the first time. Only the year before he had been in Rwanda to do nothing with equal effect, that is, none at all, while the genocide there unfolded. Naturally he would later become secretary-general of the United Nations. Nothing succeeds at the UN like bloody failure.

Meanwhile, the America of the Clinton Era slept on. Do you remember the name Warren M. Christopher? Not that there is any reason you should. He was Bill Clinton's first secretary of state, though that office might as well have been vacant. Over the course of 100 bloody days on his "watch," an estimated half a million to a million Tutsis in Rwanda were killed by Hutu gangs. But who noticed? It was a time to see no evil, hear no evil, and do nothing about it. That "policy" would be repeated in Bosnia for all too painfully long, massacre after massacre. Including the slaughter of thousands of innocent Muslims at a place called Srebrenica.

"You remember Srebrenica?" the UN's envoy to Syria was saying. "We do. We never forgot. And probably we never forgave ourselves for that." But what good is all this breast-beating about the past if the world does nothing about the ongoing slaughter in the present? Never Again, all vow, even while it is happening again in Syria -- and countries all around it. When ignored long enough, atrocities have a way of spilling over.

Why get involved, our isolationists want to know, not realizing we are already involved whether we want to be or not. Evil doesn't ask for permission before it crosses an international border. Any more than Ebola does.

It's an old, old mistake of our isolationists to believe we are safe here from dangers elsewhere, separated as we are from the world by broad oceans on either side, not realizing we have been involved in world wars even before we were a nation. See the French and Indian War, which was just one front in what the Europeans called the Seven Years' War. It was one world long before Wendell Willkie coined the phrase at another time when American isolationism was at high tide.

The naive notion that the present and continuing horrors in Syria and beyond have nothing to do with us is belied by every video out of ISIS, or whatever that latest terrorist outfit calls itself today--the Islamic State? It would be as dangerous by any other name. By now even this administration has been forced to take some notice of it, and even take some action to contain it, however little and late.

It's an American tradition by now, waiting till the last minute to discern a danger. "I sometimes wonder," American diplomat George F. Kennan once told an audience that had gathered in a great lecture hall to imbibe his wisdom, "whether in this respect a democracy is not uncomfortably similar to one of those prehistoric monsters with a body as long as this room and a brain the size of a pin: he lies there in his comfortable primeval mud and pays little attention to his environment; he is slow to wrath -- in fact, you practically have to whack his tail off to make him aware that his interests are being disturbed; but, once he grasps this, he lays about him with such blind determination that he not only destroys his adversary but largely wrecks his native habitat. You wonder whether it would not have been wiser for him to have taken a little more interest in what was going on at an earlier date and to have seen whether he could not have prevented some of these situations from arising...."

In his always temperate, even detached, discourse on the shortcomings of American diplomacy, Mr. Kennan had diagnosed a continuing problem. And it continues yet. The dinosaurs may no longer be with us, but the delusions of isolationism linger. You can see them in the White House's every hesitant move -- or equally hesitant delay. The isolationist impulse is part of the American ethos by now, but that doesn't make it any less short-sighted.