A Blow For Liberty, Or: The Supremes Choose Life 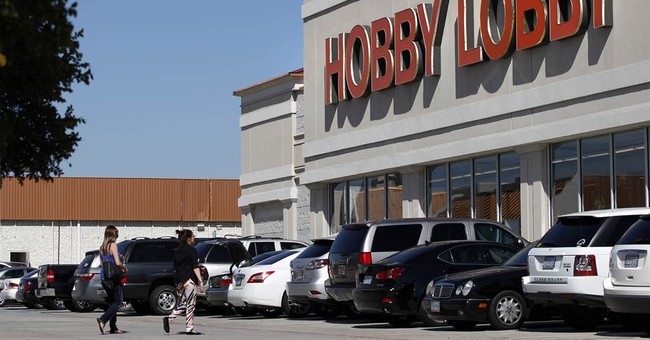 Just in time for the Fourth of July, the Supreme Court of the United States struck a blow for religious liberty. Specifically, the freedom of religion enshrined in the First Amendment. By the narrowest of margins, five justices to four, it held that Americans who choose to start a business need not check their religious convictions at the door. But only if it's a "closely held" business, a definition that will surely lead to some equally interesting cases in the future.

Whether this is only a glancing blow for religious liberty or one whose ramifications ripple out and lead to a new birth of freedom, only time and further precedents may tell. For this decision is not just a legal one but part of an ongoing cultural battle, a Kulturkampf, to determine just how tolerant of religious belief -- and practice -- America remains.

This week's term-ending ruling could affect only a few companies whose owners refuse to leave their moral convictions behind when they form a family corporation. Or it could affect many more, even the whole culture. For the IRS defines a closely held company as one in which a majority of the stock is owned by five or fewer individuals, who often turn out to be related. According to one study -- by the Copenhagen Business School back in 2000 -- nine out of 10 American companies are closely held.

But as has become all too clear of late, the IRS has a way of ignoring its own rules when an administration's politics demand it, and some obedient Lois Lerner can always be found do the dirty work. In her case, by enforcing this administration's own Enemies List, to borrow a phrase from Richard Nixon's corrupt and corrupting time.

There's no doubt that the owners of the corporations involved in this week's landmark decision were following their religious convictions. Hobby Lobby, for sterling example. That company closes its doors on Sundays so its employees can have time for church and family on the sabbath. And its mission statement commits the company to "honoring the Lord in all we do by operating the company in a manner consistent with Biblical principles." But in this modern, enlightened, neo-pagan America, them's fightin' words.

At least they were fighting words to the four dissenting justices in this case, who sounded as strident as ever as they warned that granting such exemptions for no better reason than religious conviction would undermine the administration's whole, wide-sweeping health-care program, aka Obamacare.

Some of us might have to hold back our cheers at that prospect, for this president's "signature achievement" continues to be a source of significant failures, not to mention a mountain of exemptions, waivers and changes the administration itself has granted as Obamacare continues to founder.

The innocent reader might wonder what all the fuss is about, since the ever unreliable mainstream media keeps reporting that these few companies who went to court (for a long and expensive time) were objecting only to their being forced to pay for innocuous "contraceptive" services -- without getting into the grisly details, like abortion and sterilization. And yet all of Obamacare is marked by not just an indifference to life but a contempt for it, treating pregnancy itself as a disease to be cured rather than a natural process that should afford new hope with every generation.

Obamacare's web is widely woven, for it ignores the old Hyde Amendment's prohibitions against having government subsidize abortions. It encourages, indeed just about requires, state insurance exchanges to subsidize abortions. And it mandates coverage for abortion-inducing drugs.

Naturally all this is called "preventive care," in accordance with Obamacare's abundant supply of euphemisms for life-ending procedures. And, at least till now, the administration has generally been able to brush off those churches, religious families and just plain Americans who have conscientious objections to taking human life.

Those of us who would choose life increasingly find ourselves part of a counterculture, a culture of life as opposed to the fashionable one that celebrates death by some other name. "Preventive Care," for example.

This time the rights of believers have been upheld by five justices of the Supreme Court, so chalk up a victory for life. But, as with life, such victories are always at risk.

Chris Wallace: I baked a beautiful cake with my debate preparation — and then Trump put his foot in it
Hotair
American Higher Education Is About to Melt Down In a Way That Would Make Karl Marx LOL
Redstate