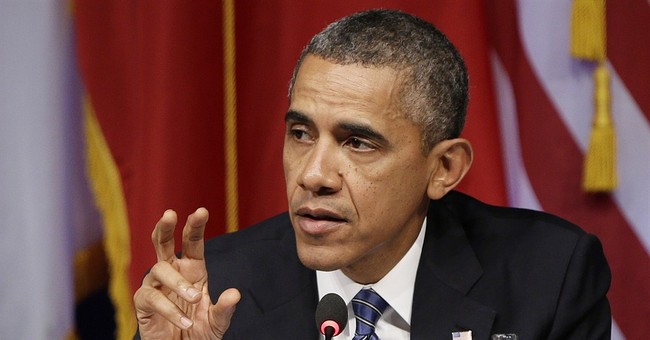 How sum up the shambles -- as far as the eye can see -- that remain of American foreign policy after the past few weeks of zigs and zags, of appeals to high principle followed abruptly, even in the same presidential speech, by a headlong abandonment of it?

How reconcile this president's demands for action and then equal but opposite embrace of inaction? There have been enough contradictions in this administration's shifts and reversals, sidesteps and evasions, advances and retreats to mystify not just friends and foes alike, and neutrals, too, but any observer -- and maybe a squad of psychiatrists to boot.

It wasn't that this great ship, the U.S.S. Foreign Policy, was dead in the water but that those in charge of it, if anybody is, had ordered Full Speed Ahead -- in all directions. Which might explain why American foreign policy continues to go 'round in circles at a record pace -- not just from day to day but hour to hour. Dizzy yet? That's understandable. Anybody who once took American foreign policy seriously would be. Now there is only confusion to contemplate.

Having painted a graphic picture of the latest horror in Syria (there have been many others, but this administration has ignored them for two and a half years going on three), the president made it clear that at last a line had been crossed by the use of poison gas, specifically his red/lavender/pink/vanishing line. "This is not a world we should accept," he told the American people, and then accepted it. Even before he'd finished speaking, he'd signed on as his refound friend Vladimir Putin's junior partner in betraying still another small country.

How summarize these head-spinning changes of course? Especially since the various reversals and counter-reversals and who-knows-what-next continue every day, even hour -- in Syria, at Geneva, at the United Nations, around the world. If there's a strategy here, maybe it's to confuse everybody, especially those supposedly in charge of it. How evaluate such a foreign policy? It's too inchoate even to criticize. I was stumped.

Then a simple way to summarize this crazy-quilt that is our ever new American foreign policy occurred to us. Of course. It's the policy of another, earlier president of the United States, and, no, not the general collapse of American will and confidence under Jimmy Carter. It generally went in only one direction: toward weakness at home and abroad.

This is something different. And it's kind of perfect in its strange way. Because this president's address to the nation was the perfect mirror-image, the complete inverse, of the rallying cry that was John F. Kennedy's eloquent inaugural address of January 20, 1961:

Let the word go forth from this time and place, to friend and foe alike, that the torch has been passed to a new generation of Americans -- born in this century, tempered by war, disciplined by a hard and bitter peace, proud of our ancient heritage -- and unwilling to witness or permit the slow undoing of those human rights to which this nation has always been committed, and to which we are committed today at home and around the world.

Let every nation know, whether it wishes us well or ill, that we shall pay any price, bear any burden, meet any hardship, support any friend, oppose any foe, to assure the survival and the success of liberty.

Now a different, very different, president and commander-in-chief has simply turned those sentiments inside out. And the word has gone forth from his time and place that the torch has been passed to leaders more than willing to witness and permit the slow undoing of those human rights to which this nation has always been committed. And every nation has been put on notice, whether it wishes us well or ill, that we are most certainly not willing to pay any price, bear any burden, meet any hardship, support any friend or oppose any foe just to assure the survival and the success of liberty. Or do anything else meaningful to stop this ongoing massacre of the innocent -- by the tens of thousands and many more to come if our leaders continue to do nothing more than wring their hands.

This president may shed copious tears for the dear departed and those about to be, but even as he does, he washes his hands of any responsibility for their fate. And that about sums up American foreign policy. For the moment anyway.

But that observation may not be entirely accurate. For there always seems one clear call quivering above the chaotic fray: Retreat! And no force -- military, diplomatic, political or moral, especially moral -- may be more vulnerable than when it is in retreat. (Remember Benghazi?) Now that debacle is being played out on a much grander but just as callous scale.

Forget that much neglected ideal, constancy of purpose. There seems to be no purpose here at all. How long, an observer of all this must ask, before not just a leading figure of this administration but the whole world is asking of American foreign policy: What difference at this point does it make?