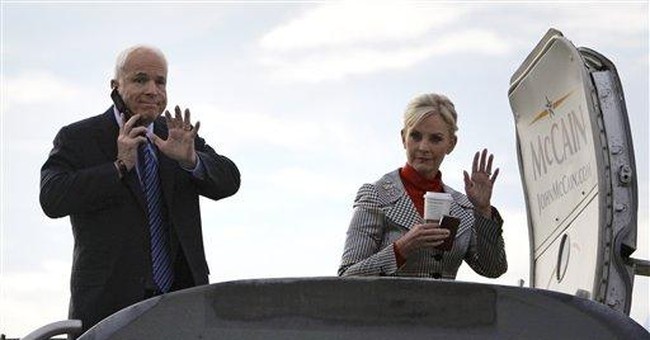 There was a small but revealing moment on the final night of the editorial writers' convention here in Little Rock not long ago. Our distinguished guest speaker of the liberal persuasion was waxing nostalgic for the heady time when the old Fairness Doctrine ruled the airwaves and all was right with the world of broadcast opinion. For in those days impartial government bureaucrats enforced the rule that, for every opinion voiced on radio and television, equal time had to be allotted to its opposite, and all was right with the world.

It all sounds fair enough - like so many abstract doctrines - if you didn't have to live with it. To appreciate, and apprehend, how the "Fairness" Doctrine really operated, just listen to one of my heroes in this business - Nat Hentoff, a true liberal who's seen it all in his couple of lifetimes in Medialand:

"I was in radio under the reign of the Fairness Doctrine, at WNEX in Boston in the 1940s and early '50s," he remembers. And being Nat Hentoff, he naturally aired a few of his opinions from time to time. Uh oh. "Suddenly Fairness Doctrine letters started coming in from the FCC and our station's front office panicked. Lawyers had to be summoned, tapes of accused broadcasters had to be examined with extreme care; voluminous responses had to be prepared and sent. After a few of these FCC letters, our boss announced that there would be no more controversy of any sort on WMEX. We had been muzzled."

The Unfairness Doctrine had claimed another victim. Which was just the way the mainstream media wanted it. Why debate others' ideas when it was so much easier to stifle them with lawyer letters?

It was a deliberate strategy. To quote one of the Democratic Party's apparatchiks back then, Bill Ruder: "Our massive strategy was to use the Fairness Doctrine to challenge and harass the right-wing broadcasters, and hope that the challenges would be so costly to them that they would be inhibited and decide it was too costly to continue."

It worked. Broadcast opinion was soon largely reserved for the right people with the right opinions, that is, moderately leftish ones. Or what our guest speaker called "legitimate" news outlets - like the New York Times instead of all those loudmouths agitating over the airwaves.

The gamut of political opinion on the television networks, all three of them in those pre-cable days, ran roughly from center to left-of-center.

This is the period today's nostalgic gliberals refer to as The Golden Age of television news. Golden for their opinions, anyway. At a time when the tube was still the dominant, shaping medium, ABC, NBC and CBS were the holy trinity. Any other viewpoint was considered less than respectable, even heretical, or just ignored. Which was easy to do if they couldn't be aired.

There was but one Truth in those days and Walter Cronkite was its prophet. They called him the most trusted man in America, and doubtless he was, for though he had imitators, he had no real competition. How things have changed. Mr. Cronkite tried writing a syndicated column not long ago and it fell flat.

Because in this age of alternatives like 24/7 television news, radio talk shows all over the dial, and the ubiquitous internet with all its bloggers, one for every taste and many with no taste at all, there is a multiplicity of other viewpoints to choose from. And lots of fact-checkers out there to catch us all. Just ask Dan Rather, formerly of CBS.

Wild and crazy thing, the First Amendment, when it burgeons in all its glory. It produces the widest variety of fruits, or just fruitcakes, for you can't have liberty without inviting license. But I'll gladly bear the abuses to enjoy the freedom.

There are always those who'd like to improve on freedom of speech. Shut up, they explain. All they want is what's fair, meaning their idea of what's fair. There's a difference.

They sigh for the good old days when riffraff like Rush Limbaugh and numerous imitators could be shut out of the public discourse. It is those who claim to speak for The People who resent it most when people choose to listen to somebody else.

We knew who our betters were in the good old days, when we tuned in to find out what was politically correct long before it had acquired that label. No wonder our current elite, or those who'd like to be, dream of restoring the Fairness Doctrine in all its constricting glory.

On his Web site, Barack Obama says that the country should "clarify the public interest obligation of broadcasters who occupy the nation's spectrum." I'm not sure what that means, but I have an idea. The senator can put all the lipstick he wants to on the Fairness Doctrine, but it'd still be unfair. Those who wax sentimental for it mystify me. I'd much prefer to win a fair fight, or even lose one, rather than tie the other guy's hands. For the best response to an idea one detests is not to suppress it, but to offer a better idea. It's only fair.