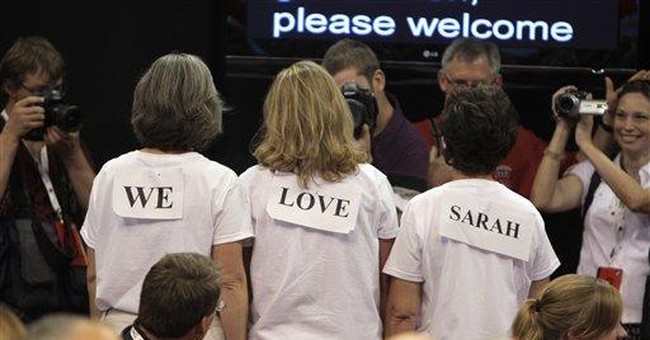 Old dogs can learn new tricks after all. John McCain fooled us all, again.

This time the old rascal went north to Alaska for his running mate. He got the whole o-so-savvy commentariat rummaging through the Internet trying to find out just who is this Sarah Palin. Is that Sarah with the "H" or without? Pay-lin? How ya spell that? Sweetheart, get me rewrite!

One thing for sure: A McCain administration -- is that the first time I've used that term? Does that mean it's becoming possible? -- could certainly be trusted to keep national security secrets. At least to judge by how complete a surprise his vice presidential pick turned out to be. And how many false leads he scattered about. Talk about camouflage. Here all these prospective veeps, properly male, were rehearsing their acceptance speeches in their minds and now . . . Sarah Who?

After the first shock and delight -- Hey, it's a woman! Hey, an Alaskan! Hey and best of all, she ain't Mitt Romney! -- there comes the first impression. And it's good. Good enough to make this eternal optimist forget Geraldine Ferraro and Spiro T. Agnew, a couple of other surprise vice-presidential nominees that the Head of the Ticket thought was a good idea at the time. Uh, oh. Can there be Dan Quayle hidden behind that appealing facade?

But as the scattered pieces of Sarah Palin's biography come together, a picture begins to form. And it's as attractive as a poster of Beautiful Scenic Alaska.

Consider: Mother of five. Small-town mayor. Governor. Tough. Outspoken. Reformer. No friend of the party machine. Approval ratings somewhere in the low 80s. No, that's not a typo. The 80s. George W. Bush, eat your heart out. The lady must be doing something right up there in the frozen north. Lifelong member of the NRA. Married to a commercial fisherman, who's also some kind of snowmobile champ, she was a journalist before going straight. In her youth, runner-up for Miss Alaska. Now strait-laced, old-fashioned Republican but with a wide populist streak. Civil yet firm. Corruption fighter. She won't even allow lobbyists into her governor's office on the third floor of Alaska's tiny state capitol at Juneau.

As for her personal trials and tribulations, aka Scandals now that she's in the national spotlight, they sound a lot like a capsule picture of The American Family, 2008, God bless her and hers. Who can't identify? Who doesn't have a family and all that comes with it?

Family values? Pro-life? The woman doesn't have to say a word to assure anybody on that score. Just look at that family photo. Was a union member, too. A reminder that there's a difference between union members and their bosses.

Every entry in her biographical file appeals. I can feel the call of the identity politics I've been badmouthing for years.

And those schoolmarm glasses. I think I'm in love. She's probably got antlers on her living room wall and a gun rack in her pickup truck. Do you think she does the two-step? Yee-hah!

Then the first impression begins to solidify: Here's someone who's demanding, most of all of herself. I've got this instinctive impulse to stand up straight, salute, and shout: Yes, ma'am! Wilco!

Always reserving the right to tear the lady apart in snarky columns to come, my first reaction: a masterstroke. Congratulations, John McCain. Sir.

The scandalmongering can come later. Indeed, it's already begun. You'll hear a lot of things about the lady. Order up a carload of salt.

I write this surrounded by a sea of shining shards that used to be a glass ceiling. Hillary Clinton put 18 million cracks in it this year, and now Sarah Palin has broken right through it. Naturally she'll be attacked as too inexperienced for the job. By supporters of . . . Barack Obama for the top job. End of argument.

Hey, what a country. I know that's an old line, but it always sounds new.

Like America herself. Tell me again that John McCain is somehow a threat to the American dream. All of Barack Obama's stirring attacks in his foamy acceptance speech seem to have gone flat overnight.

Old John McCain is starting to look young at heart, and young in mind. And Joe Biden just old. Talk about surprises: Senator Biden may be in for a few in that vice presidential debate. Note another telling little detail in the lady's curriculum vitae: Sarah Palin, aka Sarah Barracuda back then, was a point guard on her high school basketball team. What a contrast she'll make with the slick senator from Delaware. She's genuine.