The Descent of St. Barack 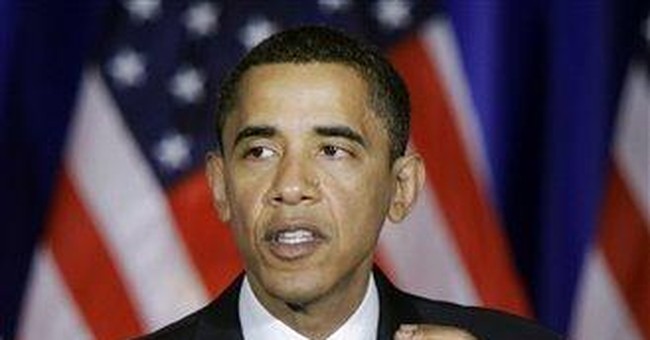 The Hon. Barack Obama hasn't yet reached Clintonesque levels of slickness, but this presidential campaign is still young and a whole summer of broken promises and general disenchantment with the Saint of Hyde Park has begun to set in.

For all its smooth, Internetted aspects, the Obama campaign begins to develop overtones of George McGovern's crack-up in the summer of 1972. Sen. McGovern was the beneficiary that year of the Democrats' newly rigged nominating system, which remains much the same. This year it allowed Barack Obama to cinch his party's nomination even as his rival was sweeping the popular vote in the big states.

George McGovern required only a few torrid weeks back in '72 to go from shining hope to utter incompetent. And now Barack Obama, the Different Kind of Presidential Candidate, has begun his metamorphosis into the same old kind of presidential candidate by backing away from his earlier promise to accept public financing.

Naturally, he claims it wasn't a promise at all but just a possibility, depending on whether John McCain would agree to accept public financing, too, which Sen. McCain did, and on various other escape clauses. We all know the drill by now: When caught in an obvious contradiction, obfuscate.

Another embarrassment: It seems that one of the political mavens Sen. Obama had scouting for a running mate enjoyed some fishy ties to Countrywide Credit, a key player in the subprime collapse.

But who didn't? By now both Kent Conrad and Chris Dodd, those two ethical paragons of the U.S. Senate, turn out to have gotten sweetheart deals from the kind of lenders the Democrats' class warriors usually tend to denounce. (John Edwards, D-Hypocrisy, is no longer in this presidential campaign but his spirit goes marching, or at least slinking, on.)

Naturally the country's New Hope waved off his veep-hunting scandal, explaining that he couldn't be expected to investigate his advisers' real estate deals. Of course not, especially since he didn't even investigate his own with Tony Rezko, that fellow pillar of the Daley machine in Chicago. Well, we can't say we weren't warned. Sen. Obama told us he was the candidate of Audacity.

It's all enough to remind some of us that poor George McGovern had problems finding a running mate, too. Back in the confusing year 1972, the McGovern-Eagleton ticket didn't even last till Election Day. Missouri's Tom Eagleton had to be dropped for lack of candor about some electric shock treatments he'd once received. Sen. Obama hasn't even made his vice-presidential pick yet and his veep problems have begun. When a trusted adviser who was going to vet his choice for vice president isn't adequately vetted himself, that says something less than assuring about what an Obama administration would be like.

Oh, tell it not at the Lyric Opera, publish it not in the Sun-Times, but how the mighty of Hyde Park have fallen. Some of us can remember when that leafy neighborhood wasn't a wholly protected subsidiary of the University of Chicago - the kind of effectively gated community and game preserve for Progressive Thinkers that it's become - but the home of giants like The Hon. and honorable Paul Douglas.

A forgotten figure who doesn't deserve to be, Sen. Douglas was a fighting Marine, true liberal and unwavering voice in the U.S. Senate for justice at home and freedom abroad, a fit companion for Scoop Jackson of cherished memory. In short, he was a more robust version of today's Lonely Joe Lieberman, that voice in the Democratic wilderness.

Sen. Obama's reversal when it comes to accepting public financing for his campaign was announced in the true spirit of our new Bobo - i.e., Bourgeois Bohemian - elite. (Thank you, David Brooks, for coining that now inescapable term when it comes to diagnosing the soft underside of the country's upper crust.) Sen. Obama explained that (a) he wasn't actually breaking his word, (b) it was really all John McCain's fault and, besides, (c) it's the system of public financing that's broken. As if it hadn't been just as broken when he made his pledge.

Skipping past these inconvenient truths, the senator from Upscale, Ill., now has issued a self-righteous statement taking the high ground while he himself opts for the low. Perfect. Perfect, self-serving hypocrisy. I can just see the look on old Paul Douglas' rugged face if he'd been asked to swallow a line that slick.

Some of us can hardly wait for St. Barack's next sly descent to the nether regions of politics, which of course will be described as but the next phase in his Holy Ascension.

If this is change and hope in American presidential politics, what, pray tell, would be steady disillusion? The country may find out soon enough. The long, slow McGovern summer of B. Obama could be just beginning.