Paul Driessen
|
Posted: Oct 13, 2018 12:01 AM
Share   Tweet
The opinions expressed by columnists are their own and do not necessarily represent the views of Townhall.com. 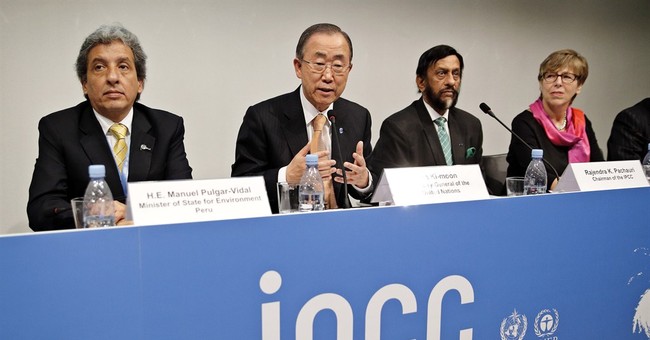 Intergovernmental Panel on Climate Change Special Report 15 claims the latest disaster “tipping point” is just 12 years away. If governments around the world fail to make “rapid, far-reaching and unprecedented changes in all aspects of society,” human civilization and our planet face cataclysm, the IPCC asserts.

In fact, the IPCC insists that fossil fuel use must be slashed from over 80 percent of global energy today to zero by 2050 – and the world must spend $2.4 trillion per year for the next 17 years to subsidize the transition to renewable energy. That’s on top of the $2 trillion per year already being spent on Climate Crisis, Inc.  research, consulting, carbon trading and renewable projects. The likely total bill: $60-80 trillion by 2036!

These massive upheavals are essential, the IPCC claims, because average global temperatures cannot be allowed to rise more than another 0.5 degrees C (0.9 F) “above pre-industrial levels.” That’s around 1850, when the Little Ice Age ended. Indeed, the IPCC now says all warming since then is due to fossil fuels!

IPCC officials also want to use climate chaos scares to redistribute the world’s resources and wealth – and “transform” the capitalist model into a one-world centrally/UN planned and controlled economic system.

Adding to the pressure for immediate action, the increasingly politicized Nobel committee awarded half of its Prize in Economics to William Nordhaus for his work trying to show that carbon taxes and other pricing mechanisms for fossil fuels are more effective and efficient than direct government controls.

It’s all just in time for the November US elections and December climate confab in Katowice, Poland.

The IPCC claims and demands are laughable, but expected after years of corruption and conflicts of interest. They are also belied by the world’s rapidly increasing reliance on fossil fuels to lift and keep people out of poverty, create jobs, and improve human health, nutrition, welfare and living standards.

Germany is building new coal-fired power plants and demolishing ancient forests and villages to extract more coal. China plans to double its coal use and (plant-fertilizing) CO2 emissions by 2030. India expects to increase its coal use and CO2 output threefold. Africa and the rest of Asia are racing to catch up.

Equally important, the IPCC disaster claims are contradicted, refuted and even demolished by real-world data, evidence and studies by scientists who are not on government and alarmist payrolls.

A 986-page 2013 report by 49 scientists from 14 countries analyzed hundreds of studies examining the physical aspects of climate change. The Nongovernmental International Panel on Climate Change report, Climate Change Reconsidered II: Physical Science, presents a detailed, authoritative, independent and persuasive analysis of the natural and human causes of climate change and their impacts on our planet.

A recent, first-ever audit found temperature data shortages so severe during the 1800s and early 1900s, especially in the Southern Hemisphere, that the information is useless for analyzing climate trends as fossil fuel use increased. The audit also cites repeated data adjustment errors, a near absence of quality control checks, and patently ridiculous errors: for example, the IPCC reported that a town in Colombia endured three months in 1978 at an average daily temperature of over 80 degrees C (176 F)!

Yet these data are the foundation for IPCC computer models, horror stories and energy policy demands.

All these studies strongly suggest that Dr. Nordhaus’s work is a solution in search of an exaggerated and largely fabricated manmade climate problem. Carbon taxes and other energy pricing systems are really an expensive, burdensome, unworkable new form of government control through price mandates. They fail to acknowledge or consider true market mechanisms and tradeoffs – thereby allowing crony capitalists, bureaucrats and activists to impose economy-wrecking price-hikes on nearly all goods and services.

Over the past four decades, “climate sensitivity” factors have steadily declined and temperature, polar ice, sea level, hurricane, tornado, drought and other real-world observations have trended far below IPCC claims that fossil fuels are causing dangerous and unprecedented problems. However, Dr. Nordhaus has consistently accepted IPCC assertions and built his carbon-pricing theories on that shaky foundation.

Actual scientific evidence increasingly shows that human effects on global climate are likely too small to be measured against the background of natural variation, much less cause “unprecedented climate mayhem.” Most climate model forecasts of future warming due to human activities violate accepted principles of scientific forecasting and have been far above actual temperature measurements.

“Public choice” research by Gary Becker, James Buchanan, Ronald Coase, Elinor Ostrom and other Nobel Prize Laureates explains why legislators, regulators and interest groups repeatedly exaggerate ecological and other threats: the hyperbole and sensationalism advance their financial interests, fame, stature or ideological agendas. In all too many cases, costly government regulations are imposed that benefit the few, while reducing opportunity, health and welfare for millions.

To the extent it is a problem, manmade climate change will not be solved by markets or by government intervention. Climate and extreme weather are still poorly understood phenomena that involve the interaction of numerous natural (and some human) forces. Addressing the hypothesized human causes involves the needs and choices of billions of people, thereby producing countless positive and negative externalities along the way. Fossil fuel benefits today and over the past 200 years have been huge and well documented, while the costs are uncertain but clearly orders of magnitude smaller than benefits.

The world is not dealing with a “tragedy of the commons” – but with an “opportunity of the commons,” an chance to use wealth created by fossil fuels to support environmental policies based on sound science, rather than ideology or scare tactics; study the actual causes of climate change, and predict changes accurately; and find the best ways for societies to respond to future climate and weather challenges.

The fact that externalities almost always exist does not necessarily justify government intervention, In fact, governments often struggle to find solutions to complex conflicts or disparate access to public goods. Coase taught that negative externalities can be traded, while Ostrom demonstrated that solutions are most likely found in private institutions that can tap the value-creating power of human genius, reliable information, private property rights, voluntary exchanges and negotiated tradeoffs.

Nordhaus and other economists need to acknowledge these facts, ClimateGate and data falsification problems within IPCC circles – and the fundamental right of people everywhere to improve their lives using fossil fuels … until equally accessible, reliable and affordable alternatives are developed.

Up to now, the IPCC and its allies have behaved too much like crooked prosecutors, witnesses, judges, juries and agitators in a capital case against fossil fuels. We cannot let them decide humanity’s future.