Paul Driessen
|
Posted: Oct 14, 2017 12:01 AM
Share   Tweet
The opinions expressed by columnists are their own and do not necessarily represent the views of Townhall.com. 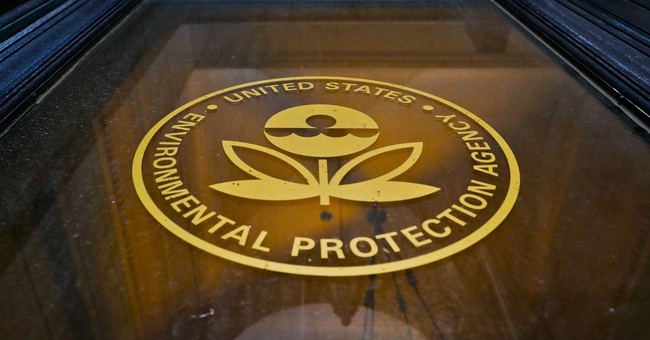 Suppose a crooked prosecutor framed someone and was determined to get a conviction. So he built an entire case on tainted, circumstantial evidence, and testimony from witnesses who had their reasons for wanting the guy in jail. Suppose the prosecutor ignored or hid exculpatory evidence and colluded with the judge to prevent the defendant from presenting a robust defense or cross-examining adverse witnesses.

You know what would happen – at least in a fair and just society. The victim would be exonerated and compensated. The prosecutor and judge would be disbarred, fined and jailed.

What you may not know is that the Obama EPA engaged in similar prosecutorial misconduct to convict fossil fuels of causing climate change and endangering the health and well-being of Americans.

EPA’s egregious misconduct inflicted significant harm on our nation. Having now terminated the Obama Clean Power Plan, EPA Administrator Scott Pruitt must reverse carbon dioxide’s conviction and scuttle the Endangerment Finding that is its foundation. Any harm from fossil fuels or carbon dioxide is minuscule, compared to the extensive damages inflicted by the decision and subsequent regulations.

Their Environmental Protection Agency did no research of its own. It simply cherry-picked UN Intergovernmental Panel on Climate Change (IPCC) reports and wrote a Technical Support Document to make its case. The TSD ignored studies that contradicted its predetermined Endangerment Finding – and relied on circumstantial evidence of climate and extreme weather disasters generated by computer models.

The models were programmed on the assumption that rising atmospheric CO2 levels are the primary or sole factor determining climate and weather. They assumed more carbon dioxide meant more planetary warming and worsening climate chaos. The role of the sun, cosmic rays, changing ocean currents and numerous other powerful, interconnected natural forces throughout Earth’s history was simply ignored.

The models predicted steadily increasing global temperatures and more frequent and intense storms. Instead, even as atmospheric carbon dioxide levels continued to rise, except for a noticeable temperature spike during the 2015-2016 super El Niño event, there has been no planetary warming since 1998. Harvey finally ended a record 12-year drought in Category 3-5 hurricanes making landfall in the USA.

Tornado deaths are far less frequent than in the 1950s. Floods and droughts differ little from historic trends and cycles. Antarctic land ice is at record highs, and Arctic sea ice is again within its “normal” levels for the past 50 years. Seas are rising at just seven inches per century, the same as 100 years ago.

The models also assumed more warming meant more clouds that trapped more heat. They ignored the fact that more low-lying clouds reflect more solar heat back into the atmosphere. Humans might be “contributing” to temperature, climate and weather events, at least locally. But there is no real-world evidence that “greenhouse gases” now dominate over natural forces or are causing climate chaos or extreme weather – nor that humans can control Earth’s fickle climate by controlling emissions.

In fact, with every passing year, climate model temperature forecasts have been increasingly higher than those actually observed over most of the lower atmosphere.

The EPA approach amounted to saying, if reality conflicts with the models, reality must be wrong – or to deciding that real-world evidence should be homogenized, adjusted and manipulated to fit model results.

Indeed, that’s exactly what EPA, the IPCC, and other alarmist researchers have done. Older historic records were adjusted downward, modern records got bumped upward a bit, and government-paid scientists ignored satellite data and relied increasingly on measurements recorded near and contaminated by airport jet exhaust, blacktop parking lots and other urban heat from cars, heating and AC vents.

The IPCC also claimed its referenced studies were all peer-reviewed by experts. In reality, at least 30% were not; many were prepared by graduate students or activist groups; and some of its most attention-getting claims (of rapidly melting Himalayan glaciers, for example) were nothing more than brief email messages noting that these were “possible” outcomes. Moreover, most IPCC peer reviewers were scientists who fervently promote catastrophic manmade climate change perspectives, receive government and other grants for writing reports confirming this thesis, and take turns reviewing one another’s papers.

In the face of these inconvenient realities, a steady barrage of Obama EPA press releases and statements from alarmist regulators and “experts” insisted that fossil fuels were causing planetary cataclysms. Anyone who tried to present alternative, realistic data or views was ridiculed, vilified and silenced.

Even one of EPA’s most senior experts was summarily removed from the review team.  “Your comments do not help the legal or policy case for this decision,” Alan Carlin’s supervisor told him.

First, oil, natural gas, and coal still provide over 80% of America’s and the world’s energy. The International Energy Agency says they will be at least this important 25 years from now. Indeed, fossil fuels are the foundation for modern industries, transportation, communication, jobs, health and living standards. Emerging economic powerhouses like China and India, developing countries the world over, and even industrialized nations like Germany and Poland are using more of these fuels every year.

The Obama EPA studiously ignored these facts – and the tremendous benefits that fossil fuels bring to every aspect of our lives. Those benefits outweigh any asserted dangers by orders of magnitude.

Second, carbon dioxide is not a pollutant, as defined by the Clean Air Act – and was never listed in any legislation as a pollutant. It was turned into an alleged pollutant by dishonest, ideological EPA prosecutors, who needed to justify their anti-fossil fuel regulatory agenda.

In reality, carbon dioxide is a miracle molecule – without which most life on Earth would cease to exist. It enables plants of all kinds to convert soil nutrients and water into the fibers, fruits, and seeds that are essential to humans and animals. The more CO2 in the air, the faster and better plants grow, and the more they can withstand droughts, disease, and damage from insects and viruses. In the process, crop, forest and grassland plants, and ocean and freshwater phytoplankton, exhale the oxygen we breathe.

In rendering its endangerment decision, EPA ignored these incalculable CO2 benefits. It dismissed experts and studies that would have provided vital information about the tremendous value to our planet and people from fossil fuels and carbon dioxide.

Finally, having a slightly warmer planet with more atmospheric CO2 would be hugely beneficial for plants, wildlife, and humanity. By contrast, having a colder planet, with less carbon dioxide, would be seriously harmful for arable land extent, growing seasons, crops, people and wildlife habitats.

The EPA Endangerment Finding is the foundation for the Obama era Clean Power Plan and other rules. Reversing it is essential to moving forward with science-based energy and climate policies.