Paul Driessen
|
Posted: Dec 03, 2016 12:01 AM
Share   Tweet
The opinions expressed by columnists are their own and do not necessarily represent the views of Townhall.com. 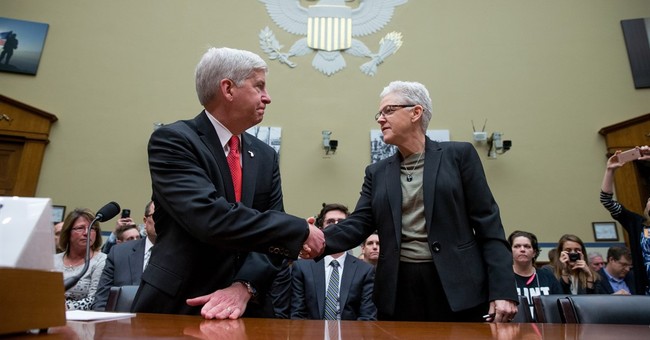 Donald Trump plans to “roll back progress” on climate change, energy and the environment, activists, regulators and their media allies assert. The claim depends on one’s definition of “progress.”

These interest groups define “progress” as ever-expanding laws, regulations, bureaucracies and power, to bring air and water emissions of every description down to zero, to prevent diseases that they attribute to manmade pollutants and forestall “dangerous manmade climate change.” Achieving those goals requires controlling nearly every facet of our economy, industries, lives, livelihoods and living standards.

If we are talking about halting and reversing this unbridled federal control, President-Elect Trump has promised to roll “progress” back – and not a moment too soon, if we are to rejuvenate our economy.

Federal land, resource and environmental agencies have unleashed tsunamis of regulations in recent years, and President Obama is poised to issue many more before January 20. The total cost of complying with federal rules was about $1 trillion annually in 2006. It has since doubled, raising the federal reporting and compliance burden to $6,000 per person per year, through late-2016.

The Obama Administration has thus far imposed some $743 billion of those new costs, via 4,432 new rules requiring 754 million hours of paperwork, according to a new American Action Forum analysis. The $2 trillion cumulative annual tab is more than all federal individual and corporate taxes collected in 2015; includes 10 billion hours dealing with paperwork; and does not include state or local regulations. Land use and environmental compliance costs account for a sizable and growing portion of this total.

So let us examine “progress” against two other standards: (1) pollution reductions to date; and (2) the validity of claims used to justify ever more burdensome and expensive environmental regulations.

We can never have zero pollution. The laws of diminishing returns increasingly come into play: getting rid of the last 10% can cost as much as eliminating the initial 90% and is rarely needed. And we cannot control nature’s pollution: volcanoes, forest fires, poisonous algae blooms, deep ocean vents, erosion of rocks bearing mercury and other toxic substances, and other sources.

However, we can reach the point where remaining pollutants pose few or no health risks – and we have largely done so. Since 1970, America’s cars have eliminated nearly 99% of pollutants that once came out of tailpipes, notes Air Quality in Americaco-author Joel Schwartz. Refiners have eliminated lead from gasoline and reduced its sulfur content by some 95% – while coal-fired power plants now remove 80-95% of the particulates, mercury, nitrogen oxides and sulfur dioxide that they emitted in 1970.

Asthma may be rising, but it’s certainly not because of pollution rates that have fallen dramatically.

Water quality has also skyrocketed. Along the river where I grew up in Wisconsin, a dozen pairs of bald eagles now nest where there were none when I was a kid, when you couldn’t eat the fish or swim in the polluted water. The same thing happened across the USA, though problems still remain to be addressed.

That’s because local officials and the USEPA didn’t do their jobs – didn’t monitor or fix failing, corroded lead water pipes. Repairing Flint’s system, and addressing water and sewer problems in other cities, will cost billions of dollars. If we are forced to spend tens or hundreds of billions on exaggerated, fabricated or imaginary risks, there will be little left to resolve our remaining real health problems.

Let us celebrate our progress, and turn our attention to real problems that still must be corrected. Let us also examine claims used to justify regulations – and roll back rules that don’t pass scientific muster.

EPA insists that saving fuel and reducing pollution from now super-clean vehicles requires that cars and light trucks get 54.5 mpg by 2025. But achieving this will force people to drive smaller, lighter, more plasticized, less safe cars – and millions more will be maimed and killed. EPA doesn’t mention that, or acknowledge that fracking ensures another century of oil and gasoline, time to devise new energy sources.

Above all, though, the Environmental Protection Agency’s reason for being, for wanting to steadily expand its budget and personnel, for seeking to regulate our farms, factories, homes and energy supplies, for trying to drive entire industries into bankruptcy – is its assertion that humans are causing catastrophic climate change, thereby endangering human health and welfare. The claims do not withstand scrutiny.

Meanwhile, as EPA moves to impose its “Clean Power Plan” and other draconian rules, developed and developing nations alike are building new coal-fired power plants every week, greatly expanding their oil and gas use, and reducing wind and solar subsidies. Even EPA analyses recognize that ending nearly all US fossil fuel use will prevent an undetectable global temperature rise of just 0.02 degrees by 2100.

So EPA has tried to justify its job and economy-killing climate change and coal eradication rules by claiming they will bring huge “ancillary” health benefits. Those claims too are pure hogwash.

The agency also says banning coal-fired power plants will reduce “carcinogenic” and “lethal” levels of microscopic particulate matter (soot) in America’s air. But EPA has no medical evidence that what is still in our air poses actual problems. In fact, EPA-funded researchers illegally subjected human test subjects – including elderly, asthmatic, diabetic and cardiac patients – to 8, 30 or even 60 times more soot per volume (for up to two hours) than what EPA claims is dangerous or lethal. And yet, no one got sick.

Obviously, EPA’s air quality standards and dire warnings about soot are totally out of whack with reality.

The federal government next concocted what it calls the “social cost of carbon” framework. It assigns a price to using carbon-based fuels and emitting carbon dioxide, by blaming US fossil fuels and CO2 for every imaginable and imaginary “harm” to wildlife, climate and humans worldwide. It completely ignores the enormous and undeniable benefits of using those fuels, the equally important benefits of plant-fertilizing CO2, and horrendous damage that would result from eliminating 81% of America’s energy.

Indeed, EPA and other regulators routinely ignore the impacts that their draconian regulations have on people’s jobs, living standards, health and welfare – including reduced or lost incomes, lower nutrition, welfare dependency, drug and alcohol abuse, and shorter life spans. They then present scientists, “health” and “environmental” organizations and advisory committees that approve and applaud the regulations – often because the agencies pay them millions of dollars a year to do so.

That’s how they remain powerful, unaccountable and immune from being fired or having to compensate victims for their incompetent or even deliberate falsifications and actions. We end up being protected from countless exaggerated and fabricated risks, years or decades from now – by having jobs, companies, industries, families, communities, and our overall health and welfare hammered by over-regulation today.

America’s voters rejected this agenda. Over 90% of the nation’s counties voted to Trump the bridge hand to tyranny. We do not want to roll back true environmental progress. But we do demand a return to sanity, science, and honest consideration of our overall health, welfare and “human environment” in approving regulations that govern our lives. Let’s insist that the new Congress and Administration do exactly that.