Terrorism in Israel – and America 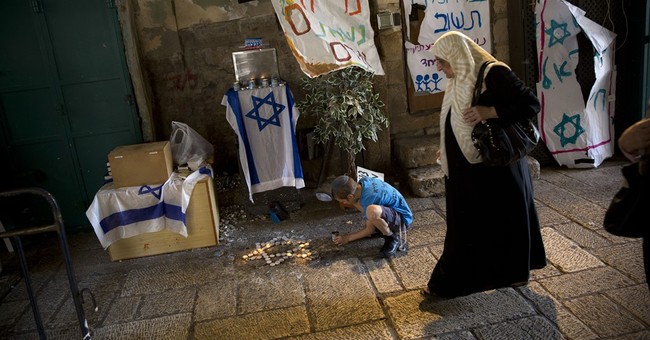 When we planned our recent trip to Israel with 50 other Northern Virginians, we didn’t expect that it would coincide with the latest spasm of Palestinian violence against Israelis. We didn’t anticipate that this new war would be more insidious than past “intifadas,” with almost daily violence coming out of nowhere, with no warning, rhyme or reason.

No one is exempt. Old people have been stabbed and brutalized on city streets; so have young mothers with toddlers, rabbis in study halls, students in cars, people praying. Soldiers have been attacked at checkpoints. Children have been forced to watch their parents murdered in front of them. People waiting for buses have been rammed by cars and split open by meat cleavers.

A rocket hit Sderot, where a menorah atop a yeshivah was crafted from rockets that had previously rained down on this beautiful city, and where a colorful playground caterpillar doubles as a bomb shelter during frequent attacks. The Iron Dome defense system took out another flying bomb over Ashkelon.

Our group never wavered in its countrywide visit, but we were always looking around warily for signs of trouble. In some places an armed security guard accompanied us.

A suburban Jerusalem shopkeeper told us he and his six-year-old twins experience constant rocks and Molotov cocktails thrown at their house. He asked plaintively, “How do I explain that to my children?” Many nearby neighborhoods endure similar threats.

We thought back to October 2002, when the Beltway sniper and his young accomplice paralyzed the DC region for weeks, sowing fear and keeping people from pumping gas, buying groceries, holding soccer practices, or venturing from their homes. We ponder what happened in Paris and Mali, Chattanooga and San Bernardino, Boston and Fort Hood, Belgium and other countries.

Americans might try to imagine 50 or 100 copycats doing the same thing for weeks, months or years on end, and exhorting others to join them. Would they send their kids to school or engage in normal activities under such terrorism? Might they want the National Guard deployed? How would they respond if snipers return, or Paris and San Bernardino become more commonplace?

While many of these attacks occur in what the news media likes to call “Israeli-occupied Palestinian territory,” many have actually occurred in pre-1967 Israel, including downtown Jerusalem and Tel Aviv suburbs like Netanya and Ra’anana. As tourists, we saw firsthand how such random attacks sow fear, changes in daily life and calls for retaliation.

Markets had fewer people, restaurants were less crowded, businesses suffered. Mothers refused to send their children to school for almost a week, until more troopspatrolled the streets. Life in cities gradually began returning to “normal” as our trip ended, but the stabbings and shootings continue.

News stories and anti-Israel activists often say more Palestinians than Israelis have died in these attacks – and repeat the vicious canard that “alleged perpetrators” have been “victims” of “extra-judicial summary executions.” In reality, the assailants were shot and killed while attempting to murder as many Israelis as possible; they were killed in the act by Israelis who are increasingly arming themselves for protection.

Israelis recognize that police and soldiers cannot be everywhere, and too often arrive only in time to count bodies and preventadditional murders. Self-protection under these circumstances is a citizen’s duty, and those attacking Israelis do so knowing the response is likely to be swift and uncompromising.

In fact, the response by Israelis exactly reflects Washington, DC Chief of Police Cathy Lanier’s recent advice: Citizens should do more than run or hide. They should “take the gunman down, take the gunman out. It’s the best option for saving lives before the police can get there.”

What do the Palestinian Arabs gain from their murderous mayhem, inspired by Hamas, the Palestinian Authority, the Arab media and many imams? Absolutely nothing, because the vicious attacks destroy any notion within Israel that it has a true partner for peace.

They destroy any hope or belief that West Bank and Gaza Strip Arabs will ever govern themselves peaceably, in close proximity to Israel’s major cities, sole international airport and neighborhoods teeming with children – even if their “two-state solution,” settlement removal and other demands are met.

The media, United Nations, State Department and boycott-divestment groups frequently claim the Palestinian side merely wants a state of its own next to Israel. However, the blatant refusal of attackers and their supporters to accept even pre-1967 Israel – or even depict Israel on maps – shows they are intent on keeping this 90-year war boiling for their own nationalistic or religious supremacy purposes.

Abba Eban famously said “the Arabs never missed an opportunity to miss an opportunity” for peace. They seem determined to continue that dismal record, and many want Israel obliterated.

With our own eyes, we saw that Israel is a place of marvelous vitality, creativity and diversity: amazing food, archaeology, culture, science (cell phone apps, desalination plants, miracle cancer treatments and much more), agriculture, beaches, secularism and profound spirituality. Its racial and ethnic tolerance, its human rights record – while not perfect – are worlds better than anything found in its neighboring countries, where ethnic and religious minorities are routinely repressed, tortured and massacred.

Under horribly adverse conditions, dating back decades before its founding almost 68 years ago, Israelis have built a thriving and energetic society, a marvel on the ruins of their ancient past and recent Jewish history. They are not going anywhere, nor should they be expected to – anymore than the English should leave England or Americans the United States.

Indeed, Israel has integrated some 600,000 Jews who were driven penniless from Arab lands after its 1948 independence, plus millions of other Jews and non-Jews from around the world over later decades. Its Christian population has risen from 34,000 in 1949 to 170,000 today. As they built new lives in their adopted land, Israel prospered with them.

By contrast, virtually no Arab countries have accepted or integrated any Palestinian Arabs, many of whom still claim “refugee” status generations after this long war began. They treat refugees from the current Iraq-Syria conflagration the same way, while driving out or murdering non-Muslims. How many Syrians are in Saudi Arabia or Qatar today, instead of Germany or France?

Israel’s Jews live the Jewish people’s dream of a sovereign state reborn in its ancient homeland, and they are there to stay, along with Circassian, Christian, Druze, B’hai, Arab and other Israelis we met. In sad parallel, the Palestinian Arabs have built a society based on death, perpetual grievance, medieval attitudes and beliefs, and murder-suicides they mistakenly call martyrdom.

The sooner they sheath their knives, step out of the Middle Ages, and accept the fact that their Jewish neighbors will be in Israel for another 3,000 years, the sooner they too will have a chance to thrive in a country of their own. The first genuine steps would be a wonderful way to begin 2016.