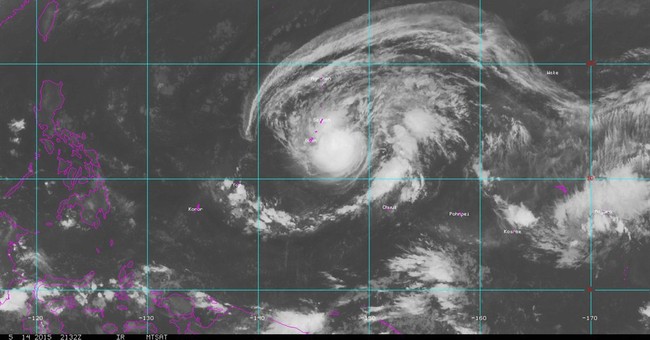 Editor's note: This column was co-authored by Tom Tamarkin.

“Here we present an updated global surface temperature analysis that reveals that global trends are higher than reported by the IPCC, especially in recent decades, and that the central estimate for the rate of warming during the first 15 years of the 21st century is at least as great as the last half of the 20th century. These results do not support the notion of a ‘slowdown’ in the increase of global surface temperature.”

Published in Science magazine to ensure extensive news coverage before critics could expose its flaws, the report was indeed featured prominently in the national print, television and electronic media.

It’s part of the twin peaks thesis: Peaking carbon dioxide levels will cause peaking temperatures, which will lead to catastrophic climate and weather. Unfortunately for alarmists, the chaos isn’t happening.

No category 3-5 hurricane has hit the United States for a record 9-1/2 years. Tornadoes, droughts, polar bears, polar ice, sea levels and wildfires are all in line with (or improvements on) historic patterns and trends. The Sahel is green again, thanks to that extra CO2. And the newly invented disasters they want to attribute to fossil fuel-driven climate change – allergies, asthma, ISIS and Boko Haram – don’t even pass the laugh test.

The NOAA report appears to have been another salvo in the White House’s attempt to regain the offensive, ahead of the Heartland Institute’s Tenth International Climate Conference. However, a growing number of prominent analysts have uncovered serious biases, errors and questions in the report.

Climatologists Pat Michaels, Dick Lindzen, and Chip Knappenberger point out that the NOAA team adjusted sea-surface temperature (SST) data from buoys upward by 0.12 degrees Celsius, to make them “homogenous” with lengthier records from engine intake systems in ships. However, engine intake data are “clearly contaminated by heat conduction” from the ships, and the data were never intended for scientific use – whereas the global buoy network was designed for environmental monitoring.

So why not adjust the ship data downward, to “homogenize” them with buoy data, and account for the contamination? Perhaps because, as Georgia Tech climatologist Judith Curry observed, this latest NOAA analysis “will be regarded as politically useful for the Obama administration.” However, it will not be “particularly useful” for improving our understanding of what is happening in Earth’s climate system.

Dr. Curry and the previously mentioned scientists also note that the buoy network has covered an increasingly wide area over the past couple decades, collecting high quality data. So again, why did NOAA resort to shipboard data? The ARGO buoys and satellite network (both omitted in this new analysis) do not show a warming trend – whereas the NOAA methodology injects a clear warming trend.

Canadian economist and statistical expert Ross McKitrick also analyzed the NOAA approach. He concluded that it wipes out the global warming hiatus that eight other studies have found. Its adjustments to SST records for 1998-2000 had an especially large effect, he says. Dr. McKitrick also recaps the problems scientists have with trying to create consistent temperature records from the multiple measurement methods employed over the centuries.

Theologian, ethicist and climate analyst Calvin Beisner provides an excellent summary of all these and other critiques of the deceptive NOAA paper.

It is also important to note that, in reality, NOAA is quibbling about hundredths of a degree – essentially the margin of error. On that basis it rejects multiple studies that found planetary warming has stopped.

Britain’s Global Warming Policy Forum succinctly concludes: “This is a highly speculative and slight paper that produces a statistically marginal result by cherry-picking time intervals, resulting in a global temperature graph that is at odds with those produced by the UK Met Office and NASA,” as well as by other exhaustive data monitoring reports over the past four decades.

The central issue in this ongoing debate is not whether Planet Earth is warming. The issue is: How much is it warming? How much of the warming and other climate changes are due to mankind’s use of fossil fuels and emission of greenhouse gases – and how much are due to the same powerful natural forces that have driven climate and weather fluctuations throughout Earth and human history? And will any changes be short-term or long-term … and good, bad, neutral or catastrophic?

At this time, there is no scientific evidence – based on actual observations and measurements of temperatures and weather events – that humans are altering the climate to a significant or dangerous degree. Computer models, political statements and hypothetical cataclysms cannot and must not substitute for that absence of actual evidence, especially when the consequences would be so dire for so many. In fact, even the “record high” global average temperature of 2014 was concocted and a margin of error.

Simply put, the danger is not climate change – which will always be with us. The danger is energy restrictions imposed in the name of controlling Earth’s perpetually fickle climate.

Moreover, the IPCC’s top climate official says the UN’s unelected bureaucrats are undertaking “probably the most difficult task we have ever given ourselves, which is to intentionally transform the [global capitalist] economic development model.” Another IPCC director says, “Climate policy has almost nothing to do anymore with environmental protection. The next world climate summit is actually an economy summit, during which the distribution of the world’s resources will be negotiated.”

That summit could also give government officials and environmental activists the power to eliminate fossil fuels, control businesses and entire economies, and tell families what living standards they will be permitted to enjoy – with no accountability for the damage that will result from their actions.

For developed nations, surrendering to the climate crisis industry would result in fossil fuel restrictions that kill jobs, reduce living standards, health, welfare and life spans – and put ideologically driven government bureaucrats in control of everything people make, grow, ship, eat and do.

For poor countries, implementing policies to protect energy-deprived masses from computer-generated manmade climate disasters decades from now would perpetuate poverty and diseases that kill them tomorrow. Denying people their basic rights to have affordable, reliable energy, rise up out of poverty, and enjoy modern technologies and living standards would be immoral – a crime against humanity.

Countries, communities, companies and citizens need to challenge and resist these immoral, harmful, tyrannical, lethal and racist EPA, IPCC, UN and EU decrees. Otherwise, the steady technological, economic, health and human progress of the past 150 years will come to a painful, grinding halt – sacrificed in the name of an illusory and fabricated climate crisis.

Paul Driessen is senior policy analyst for the Committee For A Constructive Tomorrow (www.CFACT.org), author of Eco-Imperialism: Green power - Black death, and coauthor of Cracking Big Green: Saving the world from the Save-the-Earth money machine.

Tom Tamarkin is founder and CEO of USCL Corporation and of the fusion energy advocacy groups http://www.fusion4freedom.us and http://www.fuelRfuture.com. He is widely credited with inventing the utility industry smart meter and holds granted and pending patents in the field.