Caught in a Green Crossfire 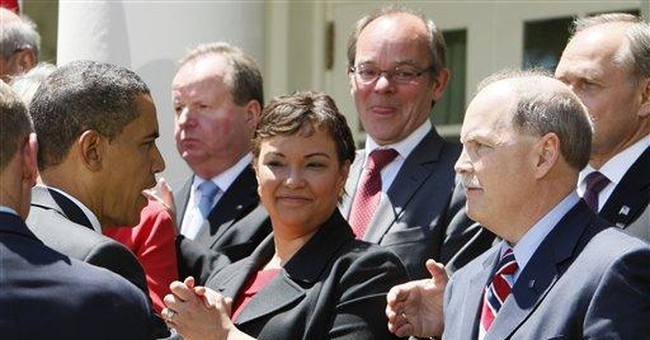 President Obama has waged war on fossil fuels for three and a half years – and American consumers and families are caught in the green energy crossfire.

They are getting hit with higher energy prices, dismal employment prospects and a floundering economy, as billions go to unfriendly overseas countries for oil we could produce in the USA, and billions of tax dollars are wasted on subsidy schemes designed to make “green” energy more competitive – by raising the cost of electricity and fossil fuels that really power our economy. Even worse, his policies are actively killing jobs and preventing job creation: in the oil patch, coal country, and hundreds of industries whose survival depends on reliable, affordable energy. Family salaries and budgets, health and welfare, hopes and dreams are being pummeled. In reality, the only thing “green” about his ideologically driven energy policies is the money leaving our wallets. Mr. Obama’s energy policy isn’t about serving American consumers. It’s about appeasing environmentalists and crony capitalists whom the President is counting on for his reelection campaign.

In an incredible “coincidence,” some of the “green” energy companies that received portions of the $15 billion in taxpayer-financed US Energy Department loans and grants are run or backed by some of President Obama’s biggest campaign donors. Solyndra – the solar company that went bankrupt, fired its employees and now cannot repay its $535-million loan – is just one example. Presidential candidate Obama said energy prices “would necessarily skyrocket” under his policies. Energy Secretary Steven Chu said “somehow we have to figure out a way to boost the price of gasoline to the levels in Europe” (over $8 per gallon), to reduce consumption. And EPA Administrator Lisa Jackson is issuing carbon dioxide and other regulations that will drive coal-based electricity out of existence, make cars even more expensive and less safe, and give her agency effective control over our entire economy.

Belatedly realizing that supporting $8 gasoline is not politically astute, President Obama and many Democrats are now trying to recast themselves as friends of consumers, at least until November, by backing a few oil and gas projects – while strangling other projects and entire industries in miles of regulatory red tape.

When the House Appropriations Committee asked Secretary Chu if his goal now was to lower gasoline prices, he responded: “No, the overall goal is to reduce our dependency on oil, and build and strengthen our economy” – via algae and other “alternative” or “green” energy projects, mandates for further improved energy efficiency, and even expensive biofuel for fighter jets and navy ships, to justify keeping America’s abundant petroleum resources off limits.

When his comments sparked new torrents of criticism, Mr. Chu did another flip-flop, saying days later, “Both I and the President and everybody in the administration want to do what we can to lower the price of gasoline.” Their anti-leasing, anti-drilling, anti-pipeline policies are a strange way to do that.

Even former Tennessee Democrat Congressman Harold Ford, Jr. has called on President Obama to support more production from federal lands and waters, and approve construction of the Keystone XL pipeline, which would bring 800,000 barrels of oil a day from Canada, Montana and North Dakota to Gulf Coast refineries – and create 180,000 direct and indirect jobs in the process. These are two long overdue steps, but there is no indication that the President will take them. Worse, his administration is doing just the opposite.

His Interior Secretary says drilling proponents live in “a world of fairy tales,” if they think we can drill our way into more jobs and greater prosperity. He sends helicopters out to find 28 ducks that died when they landed in oilfield waste pits – and then proposes regulations that would allow wind turbine operators to kill hundreds of bald and golden eagles annually, without penalty, and fast-track wind and solar projects that would severely impact wildlife, habitats and scenic areas.

His Environmental Protection Agency issued 588 pages of new rules to over-regulate hydraulic fracturing that has been the only reason American oil and gas production has increased under Mr. Obama’s watch. Meanwhile, EPA, Interior and other federal agencies are issuing extreme, often conflicting, environmental regulations that do little or nothing for human health or the environment, delay oil and gas production, saddle consumers with billions of dollars in extra expenses, drive up pump prices, impair job creation, and deprive America of billions in bonus, royalty and tax revenues.

In an attempt to distract voters from these real issues, President Obama calls incessantly for investigation into alleged “oil speculators” and for an end to what he falsely labels “oil company subsidies.” In reality, he wants to block certain oil companies from getting the same tax deductions that other American companies are allowed to claim, and hit the oil companies with $4 billion in tax hikes that will drive gasoline prices even higher.

It’s like saying new regulations and taxes on coffee will make a cup of java cost less. The only way any of this makes sense is when you realize that higher gasoline (and electricity) prices are the very purpose of Obama policies. The President just wants to achieve his goals without leaving any fingerprints – and by getting people to blame oil companies instead. President Obama and his allies need to stop masquerading as friends of American motorists, workers and families – and change their energy policies so that they become friends in reality. But don’t bet on that happening.