Pat Buchanan
|
Posted: Jun 17, 2016 12:01 AM
Share   Tweet
The opinions expressed by columnists are their own and do not necessarily represent the views of Townhall.com. 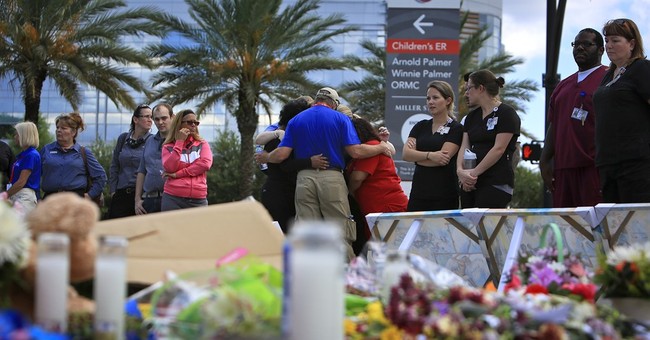 If the cliches hold -- nothing succeeds like success, the past is prologue -- this generation will not likely see an end to the jihadist terror that was on display at Pulse in Orlando on Sunday.

For terrorism has proven to be among the most cost-effective and successful strategies of war that the world has ever seen.

Consider. The 9/11 attacks involved 19 hijackers willing to crash airliners into four buildings: the World Trade Center towers, the Pentagon and the Capitol.

So doing, those 19 altered the foreign policy of the United States.

They drew the world's last superpower into wars that have bled and almost bankrupted us, broken a president, and left us mired in half a dozen civil and sectarian conflicts with no exit or end in sight.

As a political terrorist, Osama bin Laden rivals Gavrilo Princip, whose assassination of the Austrian archduke set in train the events that led to the Great War that brought on the downfall of the West.

Consider the success of Islamist terror since 9/11.

As Gerry Seib of The Wall Street Journal notes, in the 15 years since then, just 95 Americans have died in jihadist attacks in the U.S.

Yet, one atrocity in Orlando, where 49 were slaughtered, polarized the nation, brought the presidential candidates to savaging one another, and held a national TV audience spellbound for a week.

The whole world is talking about Orlando.

And what did this victory cost the Islamic State?

Zero. What Omar Mateen did suicide bombers do every day in Iraq, Syria and Afghanistan, kill dozens of innocent people while shouting "Allahu Akbar!"

Yet compare the returns from this act of Islamist terror in Orlando, to those from similar attacks in Kabul, Baghdad or Damascus.

Any wonder ISIS would implore its followers to strike where they are, inside the U.S., inside Europe, and not come to Syria to die anonymously?

Under siege in Raqqa, Mosul and Fallujah, being bombed and bled as it surrenders the conquered lands of its caliphate, ISIS' shift in strategy and targeting makes perfect sense.

Consider, now, the triumphs of Islamist terrorism in Europe.

The 2004 Madrid train bombings led to the defeat of a centrist government and rise of a socialist regime that pulled Spanish troops out of Iraq.

The Paris attacks on Charlie Hebdo and the Bataclan theater strengthened the National Front of Marine Le Pen.

The Beslan massacre of school children in North Ossetia in 2004 led to a consolidation of power by Russian strongman Vladimir Putin.

Across Europe, the political impact of Islamist terrorism, though the numbers of dead and wounded have been, measured against the casualties of conventional war, relatively few, has been extraordinary.

Islamist terrorism has helped spawn anti-immigrant parties and "illiberal" regimes. The association of Islamic terror with Muslim immigration and refugees from Syria's war has helped to drive "Brexit," the British campaign to secede from the EU.

Islamist attacks have helped propel anti-EU movements and to incite nationalist demands for a recapture of state control of borders and security policy from Brussels.

Obama explains his reluctance to use the term "radical Islamic terror" on his not wishing to validate ISIS' claim to be the spear point, the fighting arm of the world's largest religion in fulfilling the mission given to it by Allah -- to make the whole world Islamic.

And this is exactly what ISIS has in mind.

By the frequency and ferocity of its attacks, it seeks to displace al-Qaida and other Islamic resistance movements in the eyes of the 1.6 billion Muslims worldwide, and to be seen by the young as the great liberator of the Islamic world and future conqueror of the West.

The crushing of the Islamic State in Iraq and Syria is a necessary but not a sufficient condition of victory in this war, for ISIS is not just an organization but a cause, a movement, an idea.

ISIS believes that by repeatedly wounding and provoking the West, it can reignite a war of civilizations. And though the West is vastly superior in nuclear weapons and conventional arms, economic power and technology, ISIS believes it can gradually drive the West out of the Middle East, as it has already helped to drive the Christians out.

Then, ISIS believes, through mass Muslim migration into a West whose native-born are dying out, Muslims can reoccupy these lands they had almost wholly conquered, until stopped by Charles Martel 14 centuries ago.

For some few Muslims, as we saw at Fort Hood, San Bernardino and Orlando, ISIS offers a dream worth dying for. And as they kill and die for ISIS, they will push America where they are pushing Europe -- to the right.