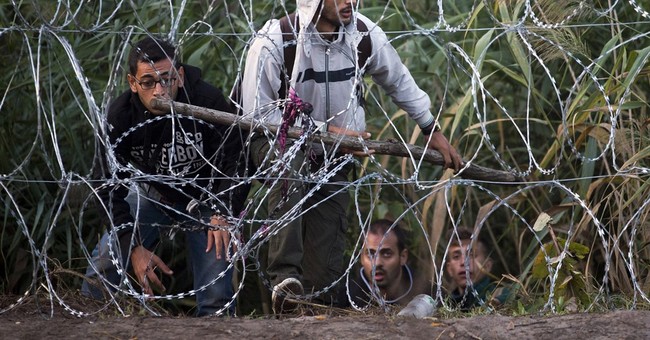 Trending
"Liberalism is the ideology of Western suicide," wrote James Burnham in his 1964 "Suicide of the West."

Burnham predicted that the mindless magnanimity of liberals, who subordinate the interests of their own people and nations to utopian and altruistic impulses, would bring about an end to Western civilization.

Was he wrong? Consider what is happening in Europe.

Serbia, Hungary and Slovakia, small nations sensing they will be swamped by asylum seekers from the Muslim world, are trying to seal their borders and secure their homelands.

Their instinct for survival, their awareness of lifeboat ethics, is acute. Yet they are being condemned for trying to save themselves.

Meanwhile, the pope calls on Catholics everywhere to welcome the asylum seekers and Angela Merkel will be taking in 800,000 this year alone, though the grumbling has begun in Bavaria.

This is but the beginning of what is to come, if Europe does not pull up the drawbridge.

For the scores of thousands of Syrians in the Balkans, Hungary, Austria and Germany are only the first wave. Behind them in Lebanon, Turkey and Jordan are 4 million refugees from the Syrian civil war. Seeing the success of the first wave, they are now on the move.

Behind them are 2 million Alawites and 2 million Christians who will be fleeing Syria when the Bashar Assad regime falls to ISIS and the al-Qaeda terrorists who already occupy half of that blood-soaked land.

Now the Iraqis, who live in a country the prospects for whose reunification and peace are receding, have begun to move. Also among the thousands pouring into Europe from Turkey are Pakistanis, Bangladeshis and Afghans. When the Americans leave Afghanistan and the Taliban take their revenge, more Afghans will be fleeing west.

Africa has a billion people, a number that will double by 2050, and double again to 4 billion by 2100. Are those billions of Africans going to endure lives of poverty under ruthless, incompetent, corrupt and tyrannical regimes, if Europe's door remains wide open?

What is coming is not difficult to predict.

Europe is going to run out of altruism long before it runs out of refugees. For as The New York Times reported Monday, there is no end in sight to the coming Third World and Islamic migrations to Europe.

Humanitarian groups, said the Times, claim "successive waves of migrants ... are on the way, perhaps for months or even years, until the wars, poverty and other underlying causes of the dislocations have abated."

But with terrorism expanding from Nigeria to the Maghreb to the Middle East, wars spreading, and tyranny pandemic in those regions, will not a peaceful, prosperous and free Europe always be a magnet?

If Europe does not seal its borders, what is to stop the Islamic world and Third World from coming and repopulating the continent with their own kind, as the shrinking native populations of Europe die out?

Will Old Europe even be recognizable by midcentury?

The inevitable reaction to what is happening has already begun.

European nations will divide with anti-immigrant parties like the National Front in France and UKIP in Britain gaining adherents until the major parties embrace restrictions on immigration or are swept aside.

Already there is a backlash in Germany and Austria to the tens of thousands invited in. Eastern Europe, with shrinking populations of native-born, has shown little interest in admitting migrants.

Though attacked by his opposition, Israel's Bibi Netanyahu will not be admitting Arab and Muslim asylum seekers. Having built a fence from Gaza to Eilat to keep Africans from crossing the Sinai, a wall to separate the West Bank from Israel, Bibi is now building a fence on the Jordanian border.

The Palestinian Authority's Mahmoud Abbas says he would welcome Palestinian asylum seekers. Both sides know that, in this struggle, demography may very well be destiny.

The Schengen Agreement that guarantees "open borders" among EU nations is also unlikely to survive this invasion. The old national borders of Europe will be re-established.

And as divisions deepen within and between countries over how many to accept, and when to shut the door, the EU may itself crack up over this most momentous and emotional of issues.

The scores of thousands of migrants bursting into Europe and the hundreds of thousands and millions coming after them are going to force Europeans to address an existential question.

Who are we? Are we unique and separate peoples of a particular race and tribe, history and faith, language and culture, identifiable to all the world and worth preserving at the price of our lives?

Are we Germans, Russians, Poles, Italians, Spanish and French first?

Or are we simply Europeans, people who live on the world's smallest continent and share a belief in the equality of all peoples and cultures, and in secularism and social democracy?

Liberal Man almost alone excepted, every species of animal life reacts or recoils when another species intrudes upon its turf.

Thus, in the end, Burnham was probably right.

Liberalism is the ideology of Western suicide.