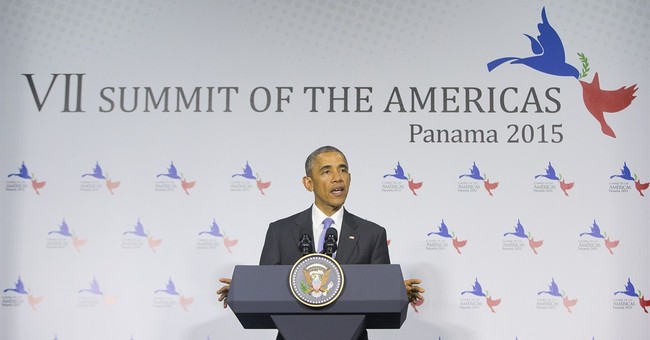 At the Summit of the Americas where he met with Raul Castro, the 83-year-old younger brother of Fidel, President Obama provided an insight into where he is taking us, and why:

"The United States will not be imprisoned by the past -- we're looking to the future. I'm not interested in having battles that frankly started before I was born."

Obama was not yet born when Fidel rolled into Havana, Jan. 1, 1959. He was 1 year old during the missile crisis. His mother belonged to a 1960s generation that welcomed the Cuban Revolution. His father came from an African generation that won independence from the European empires.

Churchill's bust may have resided in the Oval Office of George Bush. Obama sent it back to the British Embassy. His hero is Nelson Mandela, who overthrew centuries of white rule in South Africa.

Obama is as rooted in the Third World as in the West, and his goal is to sweep out the clutter of a Cold War that "has been over a long time."

He lifted sanctions on Burma, is recognizing Castro's Cuba, and hopes to seal a nuclear deal with Iran and normalize relations.

Uninhibited by old friendships, untethered to old allies, Barack Obama is grounding his Middle East policy on what he sees as the new realities.

And the policy shifts he is making are unlikely to be reversed, for the discarding of old friends in altered circumstances is an American tradition.

In 1954, Eisenhower refused to intervene to save our French allies going down to defeat in Indochina. In 1956, he ordered the British and French out of Suez. That was the end of Prime Minister Anthony Eden, Ike's wartime friend, and of the British Empire, alongside which we had fought two world wars.

In 1963, JFK sanctioned a coup against our ally President Diem.

In 1972, Richard Nixon went to Peking to toast Chairman Mao, who was responsible for tens of thousands of U.S. war dead in Korea. Nixon thus began the severing of relations and of treaty ties with our World War II ally, Chiang Kai-shek, and his Republic of China on Taiwan.

What Ike was conceding at Suez was that the British and French empires were history and Arab nationalism was the future in the Middle East. What Nixon was conceding was that Mao's revolution was irreversible, and America must deal with the new reality.

Obama is in that tradition of ruthless American pragmatism.

Three weeks after the Arab Spring reached Cairo, he pulled the rug out from under Hosni Mubarak, an ally of 30 years. Then he welcomed the electoral triumph of the Muslim Brotherhood. Now he has accepted the coup d'etat and subsequent electoral victory of Gen. Abdel Fattah el-Sissi, and his emerging Egyptian dictatorship.

What is the new reality Obama sees across the Middle East?

It is that America's most dangerous enemies are al-Qaida and its progeny, and ISIS in Syria and Iraq. And in the war against al-Qaida and ISIS, the Ayatollah's Iran and its allies -- Hezbollah, Syria's Bashar Assad and Iraq's Shiite militias -- are on our side.

However, in this same war, some of our oldest allies appear to be conscientious objectors or collaborators with the enemy.

As Joe Biden said at Harvard a while back, the Turks, the Saudis and the Emiratis provided much of the money and arms that initially fueled the Nusra Front (al-Qaida) and ISIS in Syria. Biden was forced to apologize for having told the truth.

The Israelis, too, do not share our view of who is the mortal enemy. "Hezbollah and Iran are the major threat to Israel, much more than the radical Sunni Islamists," says Amos Yadlin, ex-head of Israel's military intelligence.

But if Assad falls, then the Nusra Front or ISIS comes to power, a strategic disaster for the United States, followed by a slaughter of Christians that could drag America back into yet another land war.

Obama is not wrong here. If NATO's Turkey, Israel, and the Gulf Arabs prefer Sunni Islamists in Damascus to an Alawite regime with which we have coexisted for 40 years, then President Obama is right to move us away from our old allies. U.S. national interests come first.

Yet, a choice between Hezbollah and the Nusra Front, ISIS and the Shiite militias, al-Qaida in the Arabian Peninsula and the Houthi rebels, is a Hobbesian trap that is a conclusive argument for keeping U.S. troops out of this war of all against all in the Middle East.